US Dollar Solid Ahead of CPI and Fed Chair Powell Confirmation. Will USD Run Higher?

The US Dollar was steady ahead of CPI numbers and Federal Reserve Chair Jerome Powell’s confirmation hearing before the Senate Banking Committee. He has widespread support on both sides of the aisle.

Pre-prepared remarks have already been released and they did not hold any surprises with the focus on fighting inflation now that the economy is healthy enough.

However, there could be some volatility emerge from the question-and-answer session if there are comments that are unexpected.

The US session saw an amazing recovery late in the day for the Nasdaq. It’s being reported that retail investors bought USD 1 billion worth of stock after a JP Morgan analyst put out a recommendation to buy the dip.

Meanwhile, Treasuries continue to hold onto their lofty yields near 1.76% amid heightening anticipation for the Fed to tighten aggressively at their March meeting.

The Australian Dollar was firmer today after retail sales printed at 7.3% for the month of November against expectations of 3.6%. Trade data was a small miss at AUD 9.4 billion against AUD 10.6 billion expected.

Japan returned from a long weekend and played catch-up, with the Nikkei 225 index heading lower (-1%), while Japanese Government bond (JGB) yields moved higher with the 10-year trading near 0.145%.

Gold went higher again today, and industrial metals also had a good day with iron ore and aluminium up on the day.

ECB President Christine Lagarde will be giving an address today, but the main focus for the market will be the US CPI number.

Despite moving sideways and trapped in a 95.518 – 96.938 range since mid-November, the US Dollar index remains in an ascending trend channel.

It is above the 55 and 100-day simple moving averages (SMA), which could suggest that underlying medium and long-term bullish momentum persists. 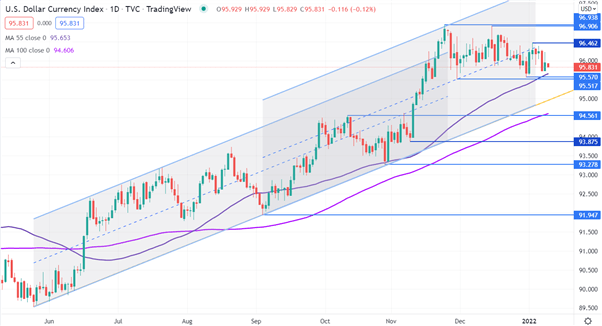