Crude Oil Prices Jump as US Holds Reserves and Ahead of US CPI. Where To from Here?

Crude oil found firmer footing after the White House indicated that it would not be tapping the Strategic Petroleum Reserves (SPR). A forecast from the US governments own Energy Information Agency (EIA), has the global market being oversupplied next year and that prices were likely to fall as a result.

The US Dollar and Treasury yields went lower in the US session, but both have made small gains in Asia. Gold is close to making a 5-month high. The Aussie and Kiwi Dollars were the underperforming currencies of the day as risk sold off.

APAC equities went lower today. They were led by Chinese stocks that were weighed down by inflation data and property developer Fantasia returning to the boards after 6 weeks and trading more than 50% lower. It defaulted on debt last month.

This weighed on the broader market and spread to the bond market. Chinese companies that borrow via high yield bonds are now facing funding costs near 24%. Chinese investment grade also sold off as their borrowing rates went higher.

Last night, US PPI came in on expectations at 0.6% for the month of October to give a year-on-year print of 8.6%. With PPI outstripping CPI, it hard to see CPI backing off in any hurry. Businesses can either reduce their profit margins, pass on the costs to consumers or do a combination of these.

Looking ahead, forecasts for headline US CPI are 0.6% for October and 5.9% for the annual number, while core inflation expectations are 0.4% and 4.3% respectively.

Oil has resumed moving up in the last few sessions as it looks to test the 7-year high at 85.41. This level and another peak at 84.88 may offer resistance.

The move up saw the price cross above the 10 and 21-day simple moving averages (SMA) These SMAs are also beginning to resume a positive gradient. This may indicate potential short-term bullish momentum could unfold. 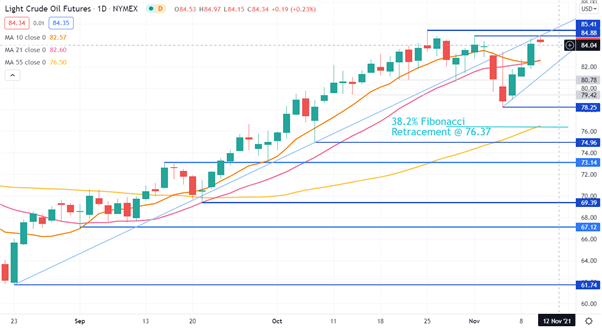