Australian Dollar Poised as Yields Roar and Oil Sinks. Will AUD/USD Get Going?

The Australian Dollar was little-changed today despite domestic yields roaring higher. The RBA did not defend their April 2024 government bond rate target of 0.10%, as it sailed past 0.30%. Yesterday’s inflation upside surprise has bond traders anticipating a pivot at the RBA monetary policy meeting next Tuesday.

The 10-year Australian government bond yield moved above 1.9% for the first time since March. The Australia–US 10-year government bond spread widened to more than 30 basis points in favour of Australian bonds (see chart in Technical Analysis section below).

The lack of reaction by the Australian Dollar might be because markets went into risk-off mode today. The Japanese Yen was the best-performing currency due to its defensive characteristics and energy markets going lower.

Crude oil continued lower in the Asian session, leading to the Norwegian Krone being the underperforming currency of the day. With the exception of gold and silver, all energy and metal commodities are weaker today.

Oil had already moved lower in US hours, as inventory numbers from the Energy Information Agency were higher than expected. Russian President Vladimir Putin directed Gazprom to send gas to Europe once domestic demand had been satisfied. Talks between Iran and the EU also showed promising signs, adding to hopes that Iran might be able to export oil again at some stage.

The Bank of Canada came out more hawkish than expected overnight. They will cease their asset purchasers from next month and have paved the way for rate hikes to begin as soon April next year.

Banco Central do Brazil also raised their key Selic rate by 1.5% to 7.75%, as the country is experiencing inflation above 10%. The Bank of Japan left monetary policy unchanged.

All this central bank hawkishness saw a bear flattening on most G-10 yield curves. A bear flattening occurs when front-end yields rise faster than back-end yields. It is seen as a potential sign that the bond market is pricing in a lower economic growth scenario. Hence, a risk-off day today.

APAC equities were all softer, although Korea’s Kospi index tried to get in the green after Samsung reported better than expected earnings. The Evergrande issue was also on investors radar, as another bond payment will need to be paid tomorrow in order to avoid a default.

Ahead, the ECB will be meeting and ECB President, Christine Lagarde, will be holding a press conference afterward.

AUD/USD has not been able to break above the 260-day simple moving average (SMA) and it might continue to offer resistance. It is currently at 0.75412.

The price has stayed above the 10-day SMA since early October and may provide support. It is currently at 0.7476. A break to either side of the 260-day or 10-day SMA could see a shift in momentum.

The previous recent high of 0.75465 is a potential resistance level. On the downside, the previous low of 0.7449 is a possible support level. 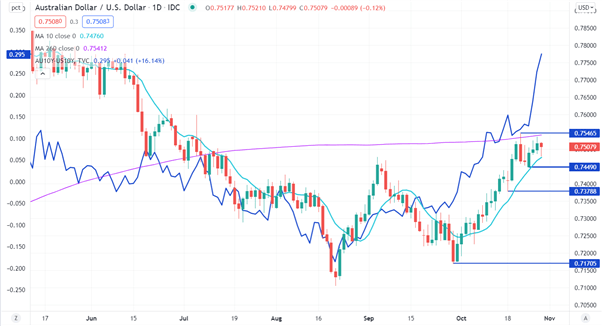