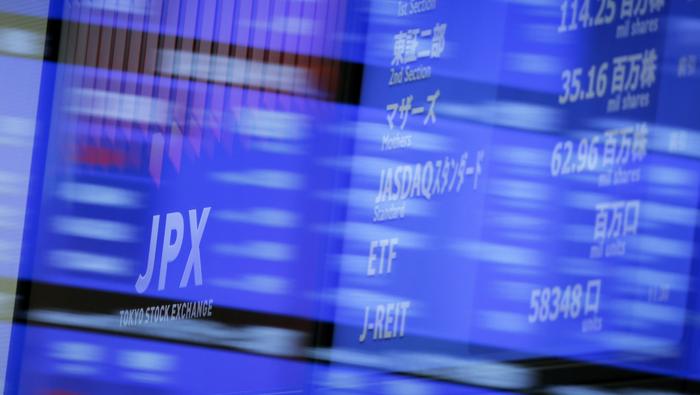 Nikkei 225 Index Ricochets Amid Crude Oil Volatility. Where Will the Index land?

Japan’s producer price index (PPI) printed higher than expected today at 6.3% y/y against 5.8% forecast. This weighed on Japanese equities as the most recent relevant consumer price data, Tokyo CPI, hit the wires at 0.3% y/y earlier in the month. The Nikkei has seen an extreme bout of volatility in the last 2 months. This is likely due to a combination of the country being an energy importer, and fiscal stimulus uncertainty amid the change in government leadership.

Most APAC bourse also finished in the red as regulatory issues again emerged with China. The country announced investigations into the relationship between financial regulators and financial institutions.

A second typhoon is due to impact Hong Kong late today. Mainland China has been also experienced torrential rain. All this precipitation has lead to the temporary closure of some coal mines at a time when power supply has become increasingly sort after.

One of the world’s busiest port at Yantian, which is in Shenzhen, ceased operations today as a storm cell approached. This is likely further exasperating global supply chain problems.

Aluminium and copper joined other commodities to greener ground as they saw decent gains in the US session. The energy complex is where the heat is at, in price anyway. Brent crude oil traded at US$ 84.60 and the WTI contract at US$ 82.18 in the US.

Looking ahead, there is only second and third tier data in the US. But there are a number of ECB and Fed officials speaking that could provide some insight on central banks inflation views ahead of US CPI on Wednesday.

The Nikkei 225 index stalled at the 55-day simple moving average (SMA) and 200-day SMA. The 21-day SMA based Bolling Bands are at an extreme width, indicating the volatility that the market has seen over the last month.

Last week, the price moved below the lower band of the 21-day Bollinger Bands. Once the price closed inside the band, the price saw 2 days of moving higher. 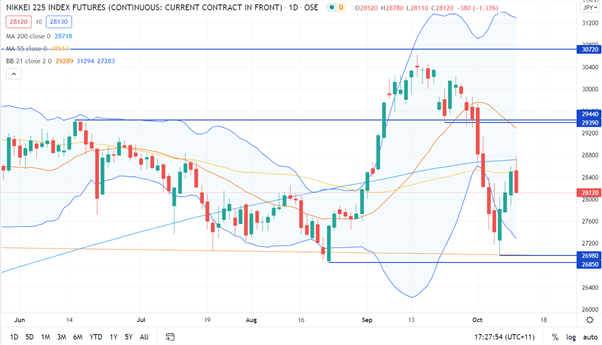