British Pound Battles US Dollar After FOMC, Before BoE. Will GBP/USD Move Lower?

The British Pound moved higher through the Asian session as the US Dollar had a mixed day in the aftermath of the FOMC meeting. The resolution of the Evergrande bond coupon payment due today is still evolving but the equity market was upbeat enough to post gains on most bourses, South Korea being the exception.

The FOMC delivered on expectations and the Fed is now believed to begin tapering stimulus at the November meeting. A rate hike is still a long way off it seems, although the skew of the “dot plot” – a summary of Fed officials’ forecasts for the direction of the bank’s target interest rate – moved from 7 to 9 members out of 18 expecting to hike rates in 2022.

The US yield curve flattened and the US Dollar rallied on the news. The USD pulled up just short of making a new high for the year as measured by the US Dollar index (DXY). GBP and EUR recovered some ground today while JPY continued to trade near its’ post-FOMC lows.

Evergrande made a coupon payment on one of its’ bonds in Chinese Yuan today, but it is unclear if it was in full or not. A US Dollar coupon payment is due in the US session and it is not known if it will be made at this stage. The terms of the debt contract allow for a missed payment period of 30 days, in which time a deal can be negotiated.

The PBOC added liquidity for the fourth day in a row and this helped to provide buoyant sentiment for markets.

Looking ahead, the Bank of England is due to meet to discuss monetary policy, but the market expects no change as the UK is experiencing high inflation and stagnating growth. US jobless claims numbers are also due to be out later.

Overnight, GBP/USD visited the 1.3600 area for the third time in 2 months. Those 2 previous lows of 1.3600 and 1.3572 might provide some support initially but a break below those levels could be a bearish signal.

The move to here has 2 medium term simple moving averages (SMA) displaying a negative gradient slope. A rally to the 21-day SMA or the 55-day SMA may see some resistance. Below those SMAs, possible resistance might be the pivots points at 1.3725 and 1.3763.

Potential further resistance may lie at the previous highs of 1.3913 and 1.3982, as well as a descending trend line. 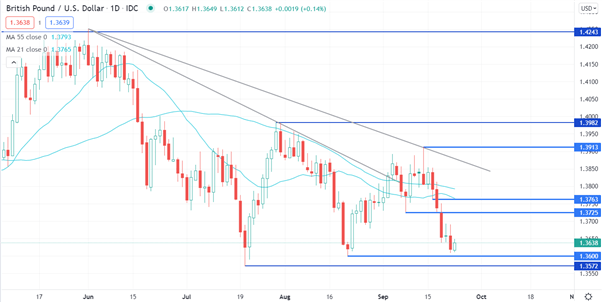