US Dollar Solid as Weak Data Weighs on Risk Assets in Asia. Will EUR/USD Move Lower?

The US Dollar continued to hold its’ ground after US CPI overnight saw a slight undershoot. Although it was a marginal miss, it would seem to alleviate the pressure on the Fed to drastically alter their taper plans at their meeting next week.

Japanese manufacturing orders printed below expectations at 0.9% for the month of July against expectations of 2.5% and previously -1.5%. The Chinese government then announced further restrictions on gaming companies and the risk off tone spread through equity markets.

Later in the session, Chinese retail sales posted 2.5% for the month of August, missing estimates of 7.0% and last month’s 8.5%. At the same time, Chinese industrial production came in at 5.3% for August, below forecasts of 5.8% and a previous result of 6.4%. Hong Kong’s Hang Seng Index went deep in the red as did the Chinese mainland indices.

The Greenback found support against risk currencies but struggled against the Japanese Yen. EUR/USD continued to test the lower end of the day’s range. AUD/USD moved lower after the China data but lacked enthusiasm and traded back in the range.

Energy markets were all moving higher in Asia after the leg up in natural gas prices in the last 24 hours. An emerging theme of such significant rises is that of substitution. As each energy asset breaks to the topside, markets are looking at other energy sources.

Ahead in the US there is industrial production numbers and the EIA/DOE oil inventories report will have more interest than usual given the moves in crude this week. Canadian CPI is also due for release.

The Euro is trading in a range within a broader range at the moment. In the shorter term, the range is defined by the most recent high and low at 1.1909 and 1.1664 respectively. These levels may provide some resistance and support on approach.

The broader range is defined by the a high at 1.2350 seen in January and a low at 1.1603 that traded in November last year. We are currently nearer the lower end of that range. There are potential levels of resistance at a breakdown pivot point at 1.2093 and a previous high at 1.2264. 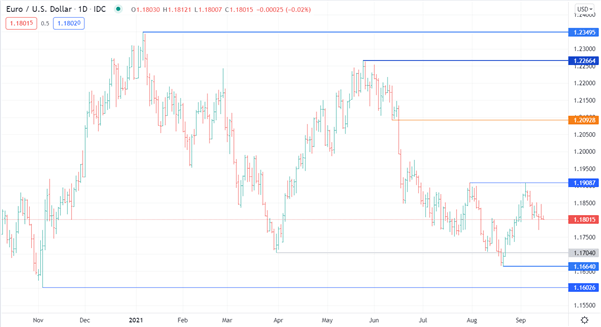