Nikkei 225 Up and Yen Down on Japan PM Hopeful Talks Stimulus, USD/CAD Eyes Bank of Canada

Nikkei 225 made a new high as it marched toward February’s 30-year peak. This came on the back of comments made by the leading candidate for leadership of the ruling LDP party, former Foreign Minister Fumio Kishida. He said today that he would introduce a massive amount of stimulus to fight deflation and introduce a new, Japanese style of capitalism. The Yen weakened slightly to test the upper end of the recent USD/JPY range.

Earlier in the day, Japanese GDP came in at 0.5% q/q for the second quarter, a slight beat of the 0.4% expected. The annualised GDP figure had some upward revisions and printed 1.9% against the forecast of 1.6%.

The Kosdaq was lower in Asian trade as the South Korean financial regulator imposed restrictions on the tech sector, with Kakao and Naver down significantly on the day. An increase in the local spread of the Covid-19 Delta variant also hindered market confidence.

Bitcoin had a wild ride over the last 24 hours with El Salvador endorsing the crypto currency as legal tender. Unfortunately, the payment system the local government was using collapsed and bitcoin moved sharply lower. At around the same time, Coinbase CEO Brian Armstrong was accusing the SEC of intimidation tactics as the company attempts to launch a new product this month.

The Bank of Canada will have a policy meeting later today where the market is expecting them keep the cash rate at 0.25% and asset purchases at C$2 billion per week. Figures released last month showed Canadian annual headline CPI at 3.7% and an uncomfortable unemployment rate of 7.5%. Any surprises from the BOC may see technical levels tested.

Up until a fortnight ago, 1.2650 had been a pivot point since April for USD/CAD. A new upward-sloping trend line has emerged after breaking through an alternative, steeper supportive barrier in late August. From here, support might lie at the previous lows of 1.2493 and a.2422. Topside levels to watch that may offer resistance are the previous highs of 1.2708 and 1.2949. 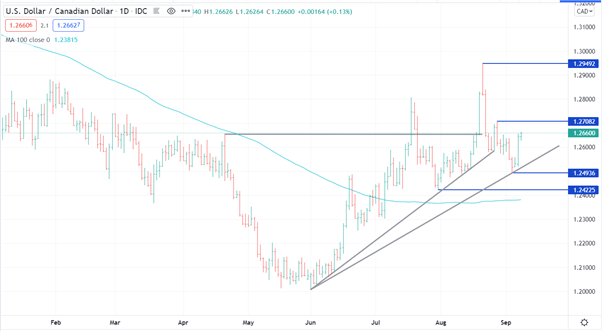