After another record high for US equities, Asian markets remained subdued today. In the US session, US jobless claims came in as expected but US PPI printed on the higher side to stoke the reflation debate for central bankers.

Delta variant case numbers are again on the rise in Australia, while in New Zealand they remain at, or near, zero. This provides a backdrop for AUD/NZD to continue it’s trend lower toward the new year low of 1.0420 as seen in the chart below. Next week we have the RBNZ rate decision and with a very strong NZ employment report earlier this month, an already hawkish RBNZ could become even more so. 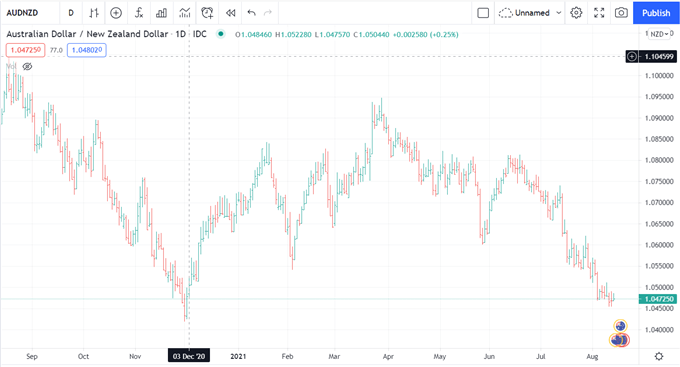 The AUD is also being undermined by iron ore prices hitting a 4 month low today. Chinese authorities have recently been cracking down on a wide range of sectors in the economy. Today we saw another report from a Chinese government-run news agency that said the country plans to significantly reduce steel production for the second half of this year.

Oil drifted lower as the market continues to digest US calls for higher output from OPEC+ and silver found some footing to end the Asian session slightly higher.

In Europe today we get inflation numbers from across many individual continental counties that will give us an indication for next week’s Eurozone price growth print. In the US session, the release of the Michigan Consumer Sentiment Indicator has the potential the hold the markets’ attention given the spread of the Delta variant in many parts of the US.

Early Monday morning in Asia we have Chinese retail sales and industrial production as well as Japanese GDP before a busy week ahead of potentially market moving data and central bank decisions/commentary.