US Dollar May Rise as Inflation Fears, Fed Outlook Hoard the Spotlight

The soggy backdrop is curious considering an assortment of noteworthy headlines that might have been expected to inspire volatility. Australia’s state of Victoria reintroduced Covid lockdown measures after an outbreak in Melbourne while the US and China held the first Biden-era round of trade talks.

Shares in China rose, seemingly after Beijing said that a chat between US Trade Representative Katherine Tai and Chinese Vice Premier Liu He “conducted candid, pragmatic and constructive exchanges [based on] mutual respect. The CSI 300 stock index popped quickly higher but swiftly retraced most of the move.

The cautious mood probably reflects a sense of anxiety ahead of Friday’s release of April’s US PCE data, the Fed’s favored inflation gauge. It is expected to show that the core growth rate jumped to 2.9 percent on-year, the highest in nearly three decades.

US price growth readings have increasingly outperformed relative to baseline forecasts in recent months, suggesting that analysts are underestimating the degree of reflation underway. If PCE readings overshoot accordingly, speculation about a sooner-than-expected tapering of Fed stimulus may heat up anew. 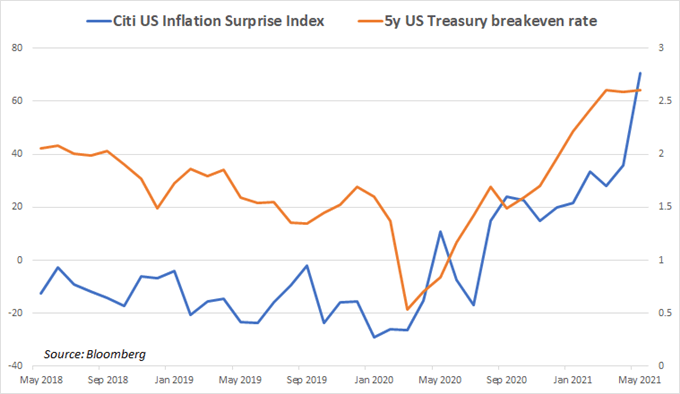 In this scenario, the US Dollar is likely to march broadly higher alongside Treasury bond yields. Meanwhile, a round of selling is likely to across sentiment-sensitive assets including stocks, growth-geared commodities like crude oil, and cyclical currencies like the Australian Dollar. Anti-fiat gold looks vulnerable too.

Near-term positioning shows USD/JPY has broken above trend line resistance guiding the downswing over the past two weeks. The breach seemingly opens the door for a move higher to test range resistance in the 109.62-79 zone once again. Clearing that may open the way above the 110.00 figure.

Immediate support continues to sit in the 108.30-55 region, an inflection zone that has acted as both relevant support and resistance since early March. A move back below the outer layer of this threshold may set the stage for another challenge of the swing bottom at 107.45. 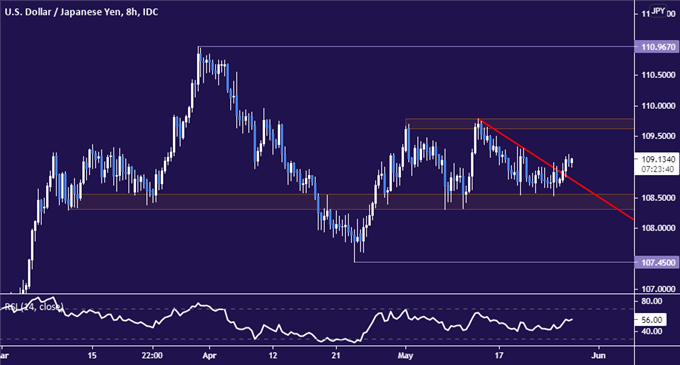