A quiet session in Asia Pacific trading hours offers a tepid lead for European financial markets ahead of the opening bell. A relatively thin offering on the regional economic data docket probably puts the spotlight on the Queen’s Speech, which will set out the government’s agenda for the new Parliament.

Markets will be keen to see if lawmakers are aiming to take up another round of expansionary fiscal measures. These would aim to help drive the post-Covid recovery and make good on Prime Minister Boris Johnson’s plans on “leveling up” across wide range of initiatives following Brexit.

The government enjoys a comfortable 80-seat majority, so its agenda is likely to move through Parliament fairly smoothly. This means that investors will probably take any plans for a meaningful spending boost at face value, bidding up inflation expectations.

That may inspire speculation about a relatively sooner unwinding of Bank of England stimulus measures, boosting the British Pound against its major counterparts. That would build on yesterday’s impressive 2.3 percent surge, the largest one-day rise in 14 months.

The British Pound accelerated against the Euro after EUR/GBP broke below upward-sloping countertrend support, as expected. From here, a daily close below the swing low at 0.8587 opens the door for a test of the minor barrier at 0.8540, followed by the 2021 bottom at 0.8472.

Alternatively, a rebound back above support-turned-resistance at 0.8624 seems likely to set the stage for another challenge of the range top in the 0.8719-31 zone. Establishing a foothold above this barrier seems like a prerequisite for neutralizing near-term selling pressure. 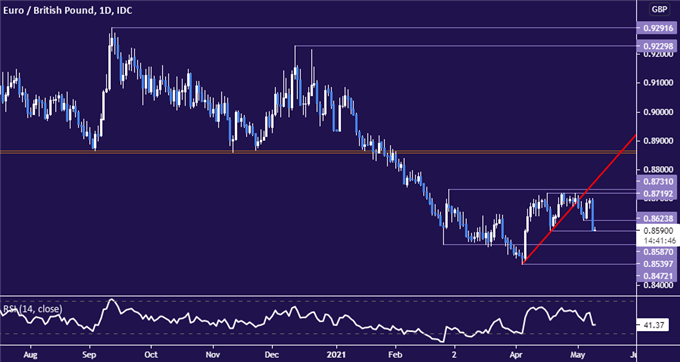