The British Pound has managed to outperform against most of its G10 FX counterparts this week, scoring outsized victories against European counterparts like the Euro, Norwegian Krone and Swedish Krona. The move may reflect pre-positioning ahead of today’s Bank of England (BOE) policy announcement.

This probably amounts to speculation that the BOE will move faster to reduce Covid-era stimulus than regional peers, where a committed dovish tilt persisted long before the pandemic. Tellingly, inflation expectations priced into UK bond markets rose alongside Sterling this week.

Governor Andrew Bailey and company are widely expected to revise economic projections upward, reflecting a spirited recovery in activity growth since the beginning of the year. Leading PMI survey data suggests the manufacturing and service sectors expanded at the fast pace in 7.5 years in April.

This much is unlikely to stir markets further unless policymakers’ updated expectations see inflation holding meaningfully above 2 percent toward the end of the forecast period. That could be read as decidedly hawkish, but such an outcome appears to be unlikely.

Guidance on the pace of asset purchases is likely to have the most significant influence on price action. This can come via the updated quarterly Inflation Report, minutes from the meeting of the policy-setting MPC committee, or the governor’s post-announcement press conference.

As it stands, the current QE effort will hit its uptake target in November. Mr Bailey asked central bank staff to come up with a plan for winding purchases back in February and any insight on their thinking here will be closely scrutinized.

Rhetoric suggesting limited scope for a top-up could lift the UK currency. Reducing the size of purchases to extend the program while tapering it off for a smooth exit into the year-end is another option, and is likewise likely to be interpreted as GBP-positive.

The British Pound may be aiming to resume its uptrend against the Euro as the BOE rate decision approaches. The EUR/GBP exchange rate broke through near-term rising trend support guiding its recovery since early April, hinting that the dominant 2021 decline might be back in play.

Immediate support is at 0.8587. A break below that faces a minor barrier at 0.8540 along the way lower toward the pivotal swing low at 0.8472. Neutralizing near-term selling pressure probably calls for a daily close above the 0.8719-31 region. That could pave the way for a retest of former support below the 0.89 figure. 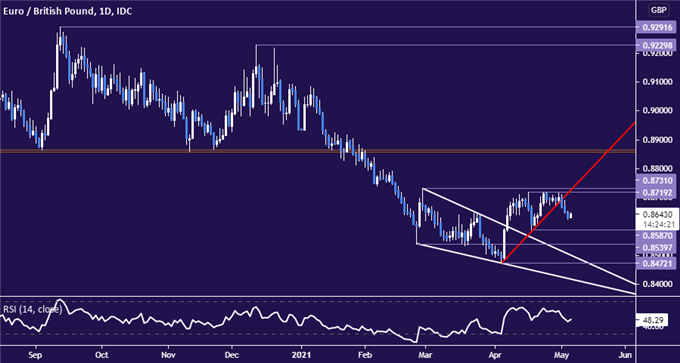