In FX markets, the risk-sensitive Australian and New Zealand Dollars gained ground, while the haven-associated US Dollar slipped lower. Gold prices held relatively steady as yields on US 10-year Treasuries stagnated at 1.6%. Looking ahead, a flurry of PMI releases out of Europe and Germany headline the economic docket.

The recent clarification of Treasury Secretary Janet Yellen’s overnight comments, in tandem with the Federal Reserve’s retention of its dovish stance, could prove to be that tailwind to drive US benchmark equity markets higher in the coming days.

Yellen stated that rate hikes are “not something I’m predicting or recommending” after initially roiling markets with talk of rising interest rates in the wake of substantial fiscal stimulus.

The Treasury Secretary’s statement that “interest rates will have to rise somewhat to make sure our economy doesn’t overheat” stoked risk aversion overnight, with the tech-heavy Nasdaq 100 – which is the most sensitive index to rising rates – falling 1.84%.

The Federal Reserve has also retained its dovish monetary policy stance, with Chairman Jerome Powell commenting that although “the economic outlook here in the United States has clearly brightened, it has been slower for those in lower paid jobs”.

New York Fed President John Williams also stated that “we have still have a long way to go to achieve a robust and full economic recovery”.

With that in mind, the Dow Jones Industrial Average could be poised to continue pushing higher in the coming days. 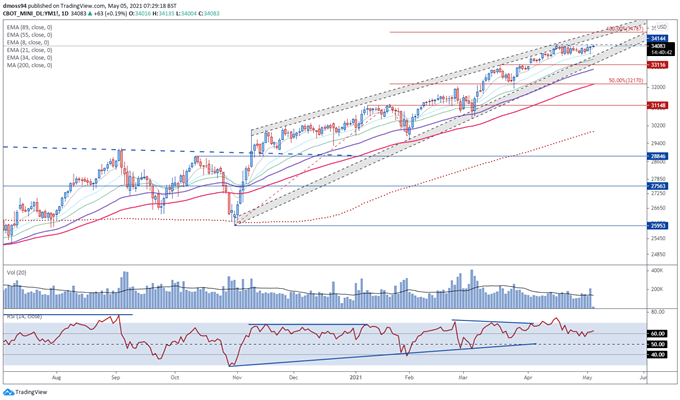 From a technical perspective, the Dow Jones looks poised to continue moving higher in the near term, as price continues to track above all six moving averages.

Rising volume, in tandem with the RSI holding above 60, suggests that the path of least resistance is indeed higher.

A daily close above 34100 probably signals the resumption of the primary uptrend and brings the 100% Fibonacci (34787) into the crosshairs. 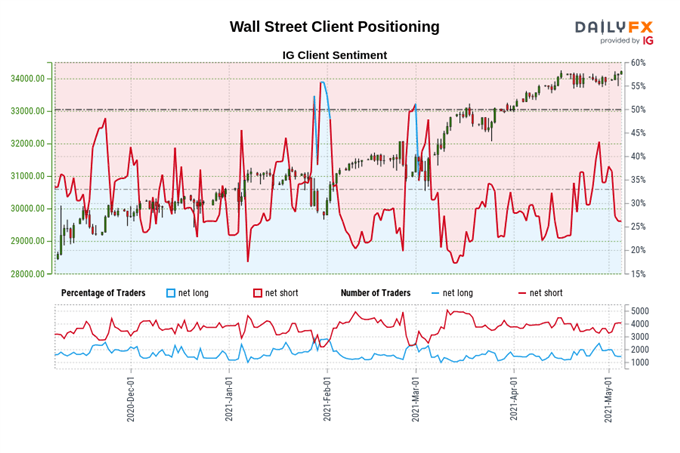 Traders are further net-short than yesterday and last week, and the combination of current sentiment and recent changes gives us a stronger Wall Street-bullish contrarian trading bias.

Gold Treads Water Ahead of a Cascade of Central Bank Hikes. Where to for XAU/USD?
Advertisement