US Dollar Price Outlook: DXY Falling Wedge in Play Ahead of PCE Release

Equity markets slipped lower during Asia-Pacific trade, as a slew of regulatory restrictions in China weighed on market sentiment. Chinese regulators imposed a range of restrictions on the financial division of several major technology companies in an attempt to keep the firms in check. Australia’s ASX 200 (-0.93%), China’s CSI 300 (-1.05%), Hong Kong’s Hang Seng Index (-1.8%) and Japan’s Nikkei 225 (-0.88%) all registered losses on the day.

In FX markets, the Australian Dollar gained ground alongside the Japanese Yen, while the US Dollar and Norwegian Krone largely underperformed. Gold prices declined for the second consecutive day as yields on US 10-year Treasuries held steady at 1.64%. Looking ahead, Euro-zone inflation and GDP data headlines the economic docket alongside PCE price index figures out of the US for March.

The Greenback has lost a considerable amount of ground since March 31, with the US Dollar Index (DXY) sliding 3.2% lower as market participants begin to buy into the Federal Reserve’s commitment to retain its current monetary policy settings until “substantial further progress” towards the central bank’s dual employment and inflation mandate is achieved.

However, a larger-than-expected Q1 GDP print appears to have re-invigorated Fed tapering bets overnight, and could open the door to a US Dollar recovery in the near term. Indeed, rates markets have begin to price in a greater possibility that the central bank hikes rates at the tail-end of next year.

This has seen yields on 10-year Treasuries resume their upward climb, with the benchmark risk-free rate spiking just shy of 1.7% in the last 24 hours. With that in mind, a marked rise in the PCE price index – the Fed’s preferred measure of inflation – could intensify tapering bets and push the Greenback higher. 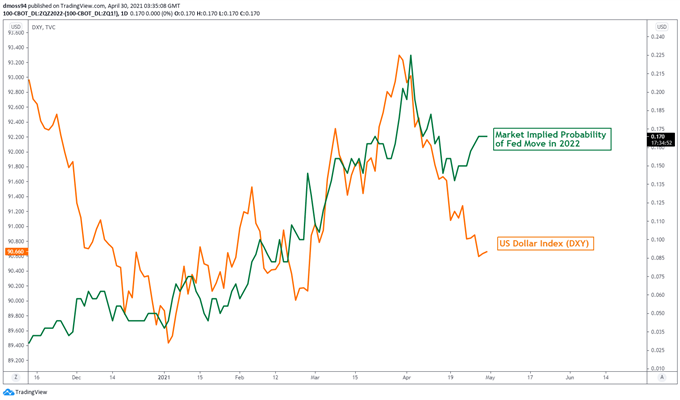 From a technical perspective, the US Dollar Index (DXY) could be poised to reverse higher in the coming days, as prices carve out a bullish Falling Wedge pattern and hold constructively above key support at 90.50.

With the RSI plateauing ahead of oversold conditions, and the possibility of a bullish MACD crossover in the near term, bearish momentum appears to be fading notably.

An impulsive push above Falling Wedge resistance and the 91.00 handle probably intensifies near-term buying pressure and brings the sentiment-defining 144-EMA (91.47) into focus.

However, a daily close below 90.50 could see prices slide back towards support at the February low (89.68). 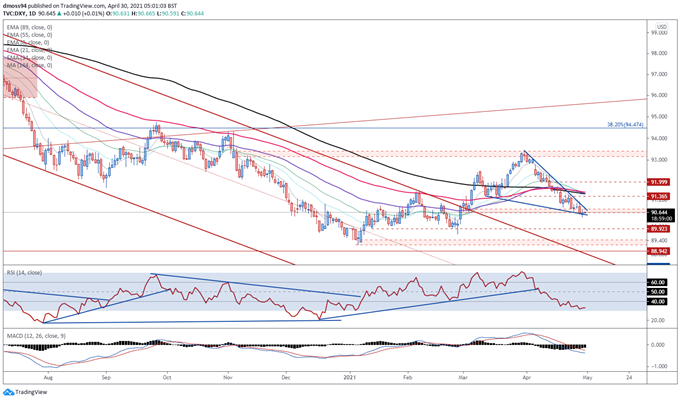