Equity markets continued to gain ground during Asia-Pacific trade, on the back of robust US corporate earnings and falling bond yields. Australia’s ASX 200 (+0.21%), Japan’s Nikkei 225 (+0.09%), Hong Kong’s Hang Seng Index (+0.61%) and China’s CSI 300 (+1.86%) all pushed higher. Bitcoin prices also moved marginally higher, after plunging as much as 15% lower yesterday amid reports that the US Treasury is opening an investigation into the crypto space.

In FX markets, the Japanese Yen, US Dollar and British Pound largely outperformed, while the Norwegian Krone and Swedish Krona lost ground against their major counterparts. Gold price extended recent gains alongside platinum and palladium, as yields on US 10-year Treasuries slipped one basis point lower. Looking ahead, the release of the Euro-area’s current account and construction output figures for February headline a rather light economic docket.

The US Dollar has lost a significant amount of ground against the Japanese Yen since surging to fresh 12-month highs on March 31, as falling Treasury yields led to a marked unwinding of the carry trade. Despite a larger-than-expected rise in consumer price inflation and a 9.8% rise in retail sales in March, rates of return on longer-term Treasuries continued to slide lower.

Clearly market participants had priced in a more aggressive series of data, and may have been caught off guard by the strong demand for longer-term maturities at the 30-year auction, with the bid-to-cover ratio – a measure of demand – coming in well above its historical average.

Moreover, the prospect of a smaller-than-expected fiscal stimulus package could put the duration trade back in vogue and potentially pave the way for the Japanese Yen to extend recent gains against the Greenback, as President Biden hints that he could favour a smaller package in a recent sit-down with a bipartisan group of policymakers.

Jumping into the technical picture certainly appears to reinforce the fundamental dynamics suggesting 10-year Treasury yields will slide lower in the near term, as rates plunge below the neckline of a Head & Shoulders topping pattern.

Momentum appears to have faded quite substantially in recent days, with the RSI diving to its lowest levels since early-October 2020 and the slope of the trend-defining 55-EMA beginning to plateau. This suggests the path of least resistance is skewed to the downside.

Breaching support at 1.53% probably intensifies downward pressure and brings the Head and Shoulder’s implied measured move (1.42), if the 55-EMA (1.48%) is successfully hurdled. This scenario would likely lead the USD/JPY exchange rate lower, as the rate differential between 10-year Treasuries and Japanese Government Bonds (JGBs) notably narrows.

However, the Greenback may resume its trek higher against the Yen, should yields stabilize and climb back above the psychologically imposing 1.60% handle. 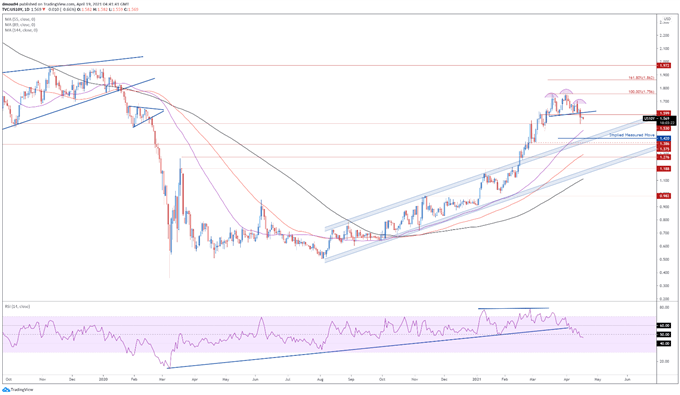 The USD/JPY exchange rate has slid significantly lower since March 31, falling over 2% after failing to gain a firm foothold above the psychologically imposing 111.00 handle.

Prices are now attempting to penetrate mobile support at the 34-EMA (108.71), in order to begin probing the March 10 low (108.34). However, downside momentum appears to be fading, as the RSI hovers firmly above 40 and the MACD continues to track above its neutral midpoint.

Remaining constructively poised above 108.30 probably results in buyers driving the exchange rate back towards range resistance at 109.60 – 109.85. Clearing that brings the yearly high (110.97) back into the crosshairs. 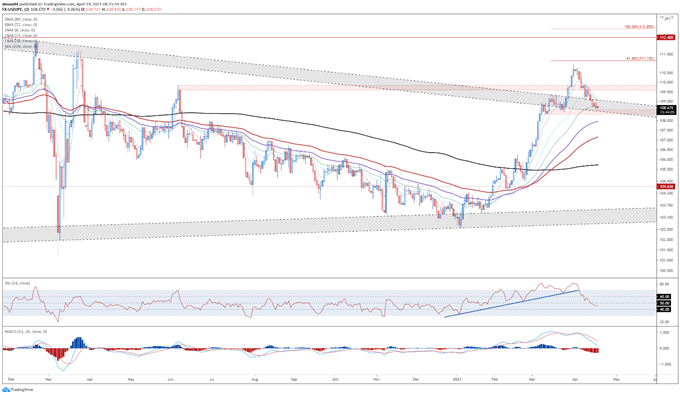 The combination of current sentiment and recent changes gives us a further mixed USD/JPY trading bias. 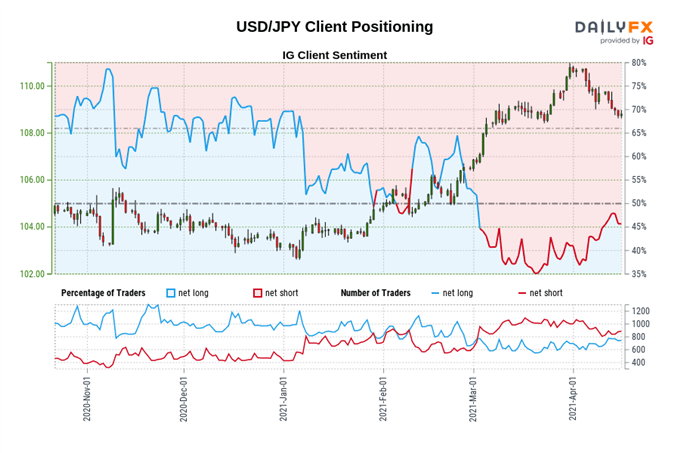