In FX markets, the New Zealand Dollar plummeted against its major counterparts after the local government announced measures to cool the local housing market, while the haven-associated Swiss Franc, Japanese Yen and US Dollar largely outperformed. Gold prices held relatively steady as yields on the benchmark 10-year US Treasury note dipped just under 3 basis points lower.

Looking ahead, a flurry of speeches from members of the Federal Reserve headline the economic docket, alongside US new home sales for February. 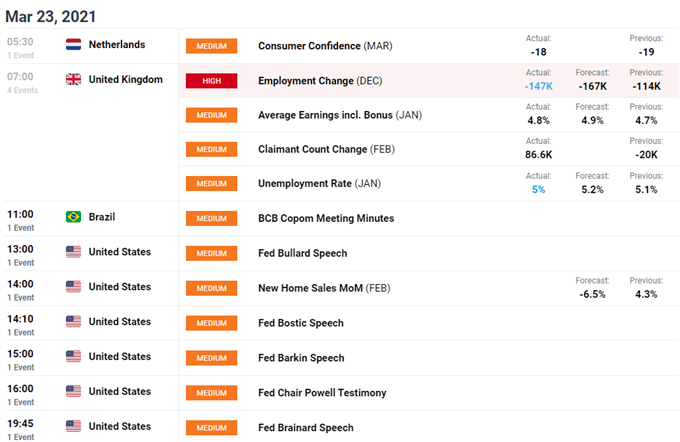 Third Wave Fears May Begin to Weigh on EUR

As mentioned in previous reports, the Euro has remained resiliently positioned against its US Dollar counterpart in recent days despite the European Central Bank’s pledge to up its purchases of bonds to counter rising bond yields, and the suspended use of AstraZeneca’s vaccine in several European nations.

The ECB bought 21.1 billion euros of bonds through its Pandemic Emergency Purchase Programme (PEPP) in the week to March 17 – the highest amount in over three months – following through on its promise to purchases at a “significantly higher pace” in the coming months.

This has to yet have a meaningful impact on the currency, with the EUR/USD exchange rate climbing 0.26% during yesterday’s session. However, the Euro may come under pressure in the near term as Covid-19 infections rise across the trading bloc, and look set to continue trending higher given only 9.1% of the population have received at least one dose of a coronavirus vaccine. 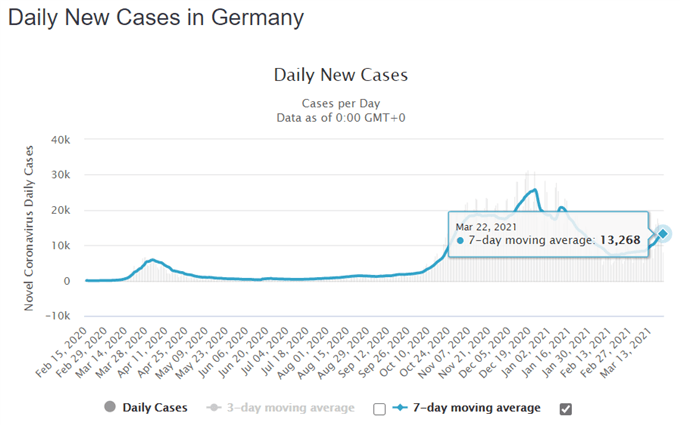 Indeed, German Chancellor Angela Merkel has announced a five-day snap lockdown starting on April 1 to combat the recent rise in case numbers. The measures will see all stores closed, private gatherings limited to one other household, and public meetings banned for five days.

Merkel stated that “we are now in a very, very serious situation”, adding that “the case numbers are rising exponentially and intensive-care bed are filling up again”. This dire assessment could flow through into regional risk-sentiment, putting a premium on the haven-associated US Dollar and ultimately hampering the Euro in the process.

From a technical perspective, the outlook for EUR/USD rates remains skewed to the upside, as prices consolidate above the sentiment-defining 200-MA (1.1850) and former trend resistance-turned-support extending from the 2008 highs.

However, with price tracking below all three short-term moving averages – 8-, 21-, and 34-day – and the RSI hovering below its neutral midpoint, a more extended push lower is hardly out of the question.

Nevertheless, if the exchange rate can gain a firm foothold above the 21-EMA (1.1973) on a daily close basis, an impulsive surge to challenge the February high (1.2243) could be on the cards.

On the other hand, sliding back below 1.1900 could intensify short-term selling pressure and generate a retest of the monthly low (1.1835). 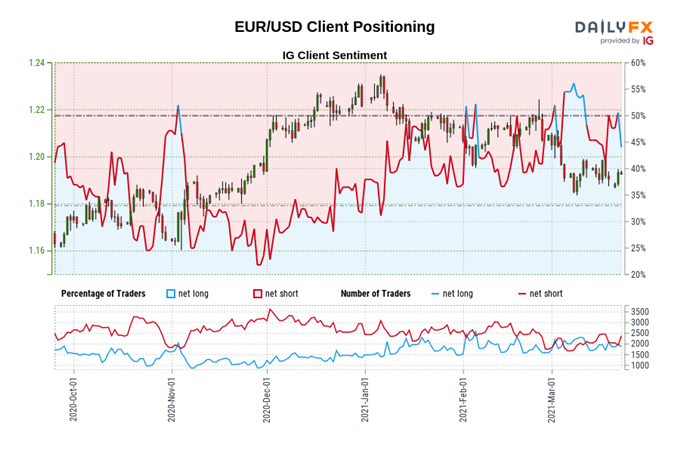