It proved to be a mixed day of trade during the Asia-Pacific session, with climbing inflation expectations keeping equity investors on the back foot. Australia’s ASX 200 jumped 0.71% as the local vaccination drive picks up steam, alongside China’s CSI 300. Japan’s Nikkei 225 plunged 1.57% while Hong Kong’s Hang Seng Index dipped 0.18%.

In FX markets, the Turkish Lira plummeted against the US Dollar after the shock removal of central bank governor Naci Agbal. The haven-associated US Dollar, Japanese Yen and Swiss Franc strengthened while the higher-beta Australian and New Zealand Dollars underperformed alongside the British Pound. Gold prices slipped marginally lower, despite yields on US 10-year Treasuries dropping just under 4 basis points, and crude oil prices drifted back towards $61 per barrel.

Looking ahead, a flurry of speeches from several members of the Federal Reserve headlines a rather light economic docket.

The United Kingdom’s rapid distribution of coronavirus vaccines has placed a premium on the local currency against its haven-associated counterparts, with the GBP/USD and GBP/JPY exchange rates climbing 4.36% and 8.36% respectively since the start of the year.

Indeed, with the 7-day moving average tracking Covid-19 infections falling to its lowest levels since September 2020, and just shy of 40% of the population receiving at least one dose of a vaccine, the UK looks on track to continue along its four-stage reopening plan relatively unabated.

Moreover, the supply of an additional 10 million doses of AstraZeneca’s vaccine will likely see the inoculation rate double in the coming weeks, and may potentially allow all adults to receive their first shot by the start of June. This suggests that the nation may return to a level of normality by the middle of this year.

Additionally, a cautiously optimistic outlook from the Bank of England diminishes the prospect of further monetary policy easing. The central bank stated in its March meeting minutes that the GDP figures for January were “less weak than expected” and that “the news in recent plans for the easing of restrictions on activity may be consistent with a slightly stronger outlook for consumption growth in 2021 Q2 than was anticipated in the February report”. 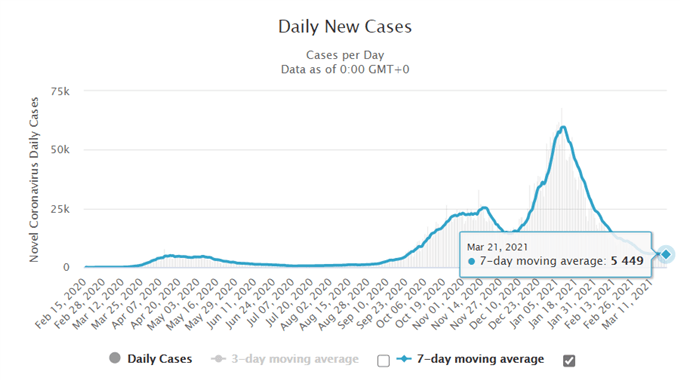 Several policymakers also pointed to upside risk to the inflation outlook, with Chief Economist Andy Haldane warning that the UK “might see a sharper and more sustained rise in inflation that expected, potentially overshooting its target for a more sustained period, as resurgent demand bumps up against constrained supply”.

That being said, it seems relatively unlikely that the BoE will taper its monetary policy measures in the near term, given the central bank does “not intend to tighten monetary policy at least until there is clear evidence that significant process is being made in eliminating spare capacity and achieving the 2% inflation target sustainably”.

Nevertheless, it’s clear that further easing is off the table for the time being, which may ultimately pave the way for the British Pound to extend its rise against the US Dollar and Japanese Yen in the coming weeks. 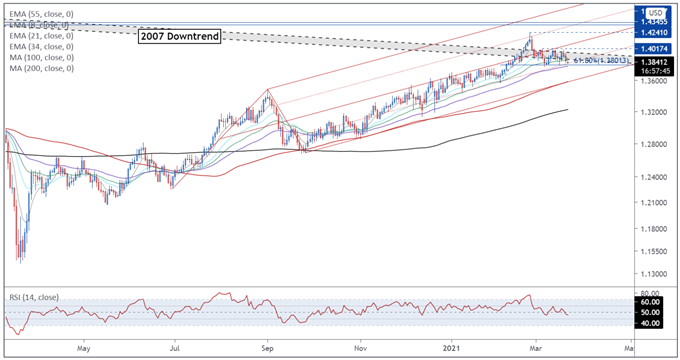 From a technical perspective, the outlook for GBP/USD rates remains tilted to the upside, as prices continue to track within the confines of an ascending Schiff Pitchfork, comfortably above the trend-defining 55-EMA (1.3784).

However, the false break above the 2007 downtrend, in combination with the RSI dipping back below its neutral midpoint, suggests that a short-term pullback could be in the making.

A daily close below the 61.8% Fibonacci (1.3801) could intensify selling pressure and carve a path for price to challenge confluent support at the Pitchfork parallel and 100-MA (1.3586).

On the other hand, holding constructively above Fibonacci support would probably open the door for the exchange rate to retest the monthly high (1.4017), with a daily close above needed to bring the yearly high (1.4241) into the crosshairs. 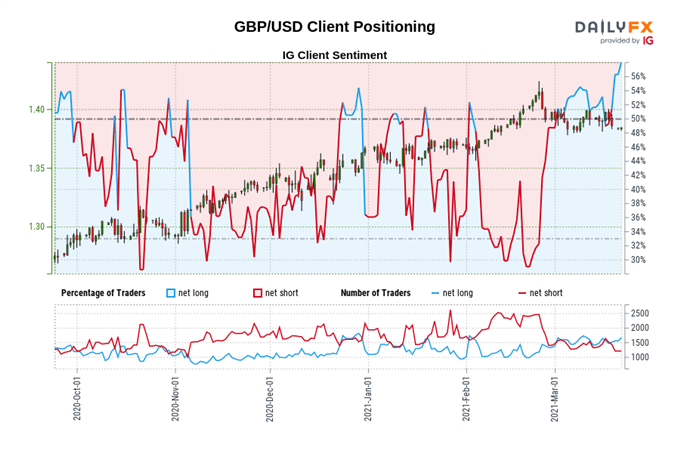 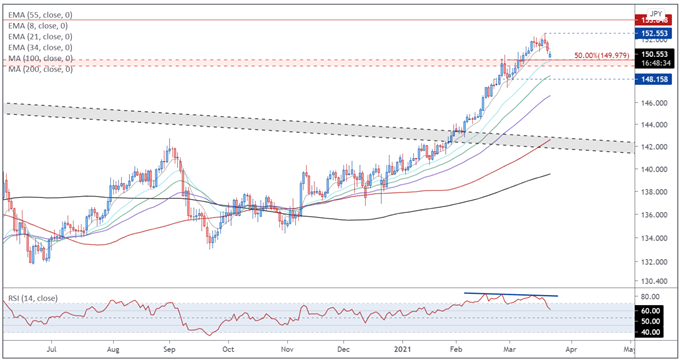 The technical outlook for GBP/JPY also continues to favour the upside, as prices begin to consolidate above former range resistance-turned-support at 149.50 – 150.00 and the 50% Fibonacci retracement (149.98) of the uptrend extending from the February 26 low to the March high.

Bullish moving average stacking, in tandem with the RSI continuing to hover above 60, suggests that the path of least resistance is higher.

With that in mind, if Fibonacci support remains intact, a rebound to test the monthly high (152.55) looks likely. Clearing that carves a path for buyers to begin to probe the 2018 high (153.85).

Alternatively, breaching the 50% Fibonacci and 21-EMA (149.88) could trigger a more extended pullback and bring psychological support at 148.00 into play. 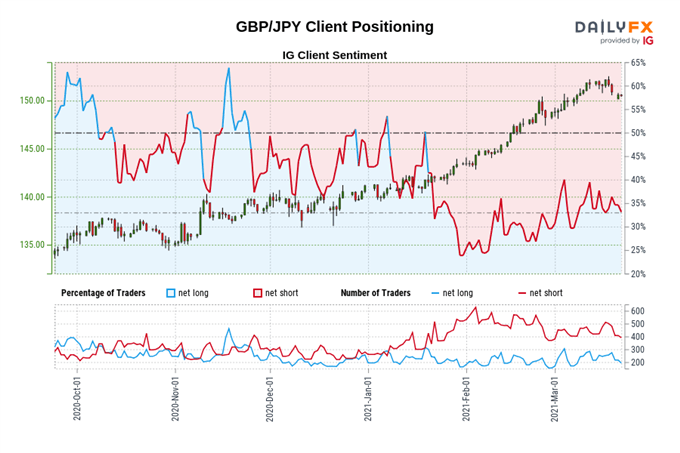 Traders are further net-short than yesterday and last week, and the combination of current sentiment and recent changes gives us a stronger GBP/JPY-bullish contrarian trading bias.