In FX markets, NZD, CHF and EUR largely outperformed, while the British Pound was the biggest underperformed in the G10 space. Gold and silver prices nudged marginally higher as yields on US 10-year Treasuries slipped back below 1.6%. Looking ahead, the Euro-area ZEW economic sentiment index release headlines the economic docket alongside US retail sales for February.

The Euro has remained resiliently positioned against its US Dollar counterpart in recent days, despite the European Central Bank’s pledge to up its purchases of bonds to counter rising yields, and the suspended use of AstraZeneca’s vaccine in several European nations.

At its meeting last week, the ECB signalled that purchases under the Pandemic Emergency Purchase Program (PEPP) over the next quarter would be “conducted at a significantly higher pace than during the first months of this year”, in order to prevent an unwanted tightening of financing conditions.

However, recent weekly purchasing data has failed to reflect the Governing Council’s concerns around rising rates of return, with figures highlighting that the central bank only purchased 12 billion euros of bonds in each of the last two weeks. This is significantly under the average rate of 18 billion per week, seen since the start of the pandemic. 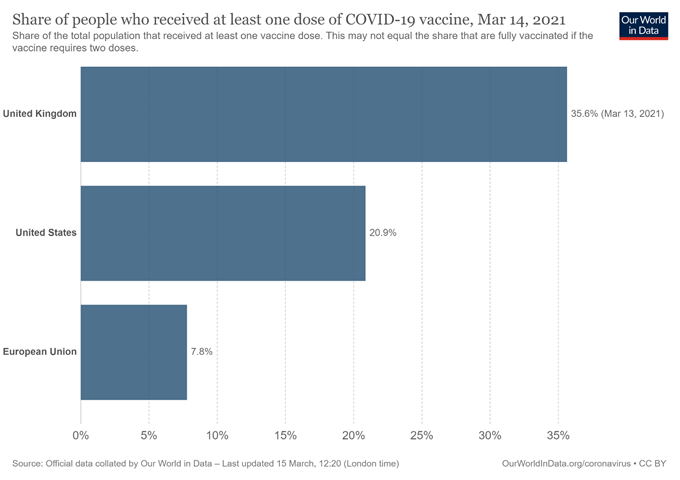 President Christine Lagarde blamed this anomaly on an elevated level of redemptions and that the true level of buying will only be reflected in the week starting March 22. This delay could be behind the Euro’s recent buoyancy, as market participants attempt to assess whether the ECB will follow through on its recent pledge.

Even more surprising has been the currency’s hardiness in the face of tightening coronavirus restrictions and a cumbersome vaccine rollout. Case numbers have begun to climb across the EU, and could continue to trend higher, given only 7.8% of the population have received at least on dose of a Coid-19 vaccine.

Moreover, government’s across the region have suspended the use of AstraZeneca’s vaccine in response to a cluster of adverse reactions involving serious cases of blood clotting. An extended delay would probably prolong the rollout of inoculations, and suggests that the Euro-zone’s recovery could lag even further behind its major counterparts.

Nevertheless, the Euro’s relative strength in the face of such headwinds suggests that the currency may have to see a more severe fallout before eventually turning lower. 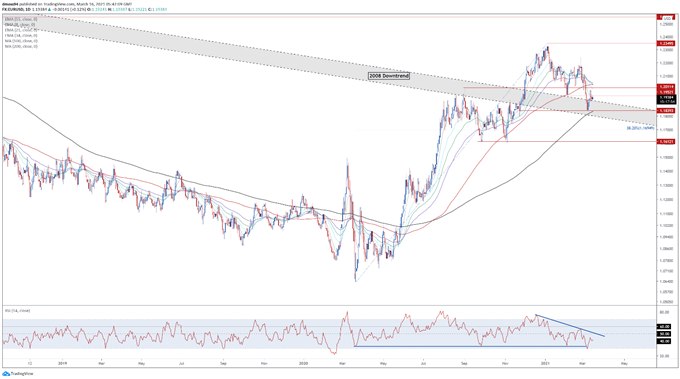 From a technical perspective, the outlook for EUR/USD rates continues to display a bullish tilt, as price tracks firmly above the sentiment-defining 200-day moving average (1.1834) and former trend resistance-turned-support extending from the 2008 highs.

The RSI failing to slide into oversold territory also hints at the possibility of further gains, given the four previous times that it fell below 40 since March, have coincided with swift rebounds higher.

Ultimately, a daily close above the 8-EMA is needed to validate bullish potential and open the door for price to challenge psychological resistance at 1.2000. Clearing that would probably carve a path for buyers to drive the exchange rate to challenge the February high (1.2243). 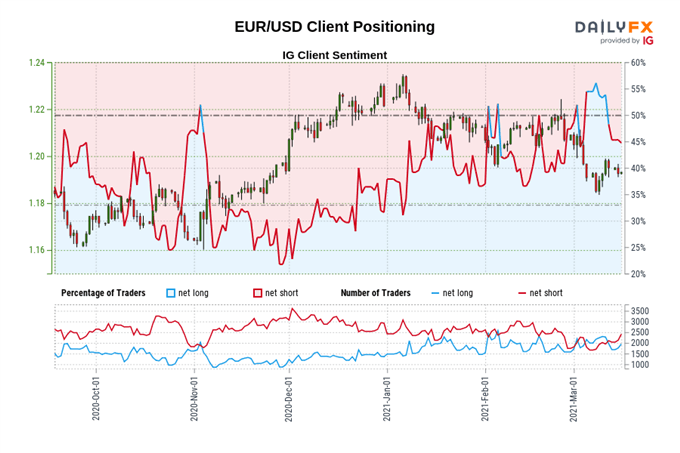