Asian equity markets clawed back earlier losses as Chinese state-backed funds intervened to prevent further losses in regional indices. China’s CSI 300 fell as much as 3.2% before rebounding higher on the back of the state-related funds stepping in and purchasing local equities. Hong Kong’s Hang Seng Index also benefited from the intervention, climbing 0.8%. Meanwhile, Australia’s ASX 200 climbed 0.47% and Japan’s Nikkei 225 rose just under 1%.

In FX markets, the cyclically-sensitive NOK, SEK and CAD largely outperformed, while the haven-associated JPY and USD slipped lower against their major counterparts. Gold and silver prices crept higher as yields on US 10-year Treasuries slid 3-basis points lower.

Looking ahead, Euro-area GDP figures for the fourth-quarter of 2020 headline the economic docket alongside inflation data out of Mexico. 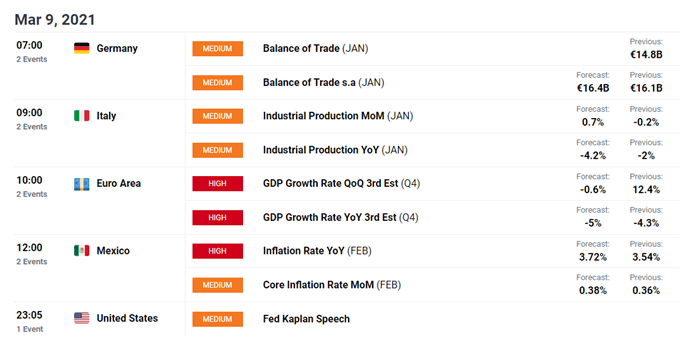 The Euro has slipped significantly lower against the US Dollar since soaring to multi-year highs on January 6, on the back of the European Central Bank and Federal Reserve’s divergent stances on the provision of additional monetary policy.

Global bond markets have sold-off robustly in recent weeks, notably worrying several ECB officials and calling into question the pace of the region’s recovery. Indeed, Governing Council member, and head of open market operations, Isabel Schnabel stated that “a rise in real long-term rates at the early stages of the recovery, even if reflecting improved growth prospects, may withdraw vital policy support too early and too abruptly given the still fragile state of the economy”.

This reinforced remarks from Chief Economist Philip Lane, who reiterated that the central bank will lean on the flexibility of its Pandemic Emergency Purchase Program (PEPP) to limit any unwanted tightening of financial conditions. Clearly, the ECB is contemplating expanding its bond-purchasing program to underpin bond prices and in turn limit upward pressures on yields. 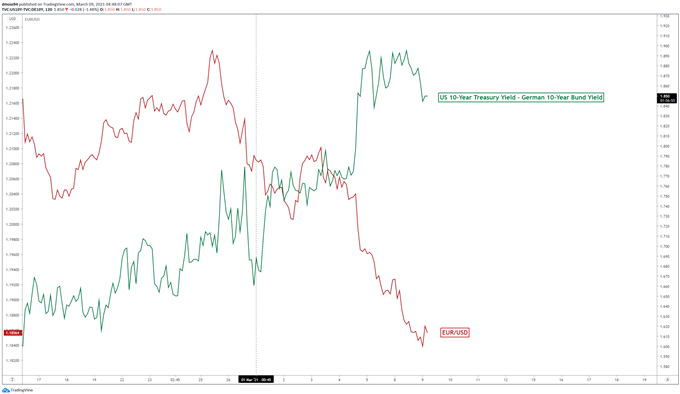 To contrast, the Federal Reserve seems relatively unfazed by the recent surge in US Treasury yields. When asked about the rise in longer-term rates, Chairman Jerome Powell stated that it “was something that was notable and caught my attention” but failed to hint at any impending action from the central bank. Instead, Powell reiterated that the Fed is still a “long way from our goals” and will be patient in assessing when the right time will be eventually being tapering monetary policy measures.

This vastly different rhetoric from the two central banks has resulted in the yield spread between US 10-year Treasuries and German 10-year Bunds jump to its widest levels since February of 2020, and in turn put significant downward pressure on the EUR/USD exchange rate.

With that in mind, should the ECB up its rate of bond purchases at its upcoming meeting to long-term rates, the Euro could extend recent losses against the US Dollar ahead of next week’s FOMC monetary policy meeting. 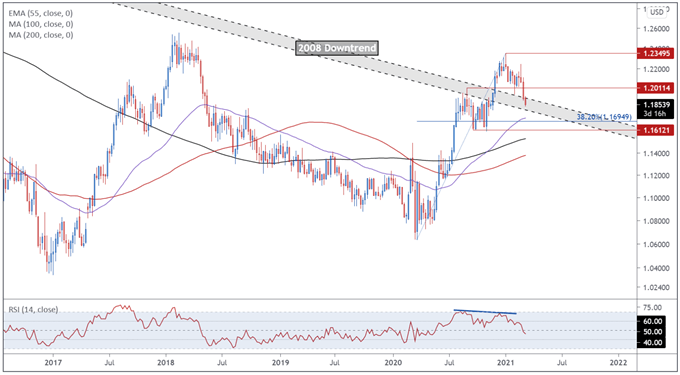 From a technical perspective, EUR/USD looks set to extend its recent slide lower, as price plunges below key psychological support at 1.2000 and the RSI dives to its lowest levels since June 2020.

However, this may prove to be a counter-trend throwback to validate the break above the downtrend extending from the 2008 highs, if price remains constructively position above 1.1800. 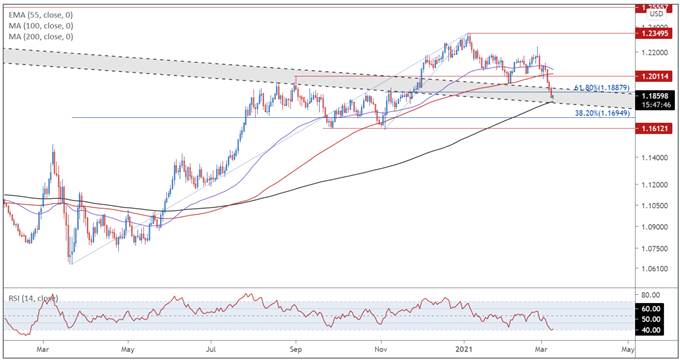 Zooming into the daily chart highlights the precariousness of the situation facing EUR/USD, as price attempts to rebound away from the sentiment-defining 200-MA (1.1816).

With the slope of the 55-EMA and 100-MA notably flattening, and the RSI eyeing a push into oversold territory, further losses appear in the offing.

Slicing through the 200-MA would likely intensify selling pressure and open the door for the exchange rate to challenge the 38.2% Fibonacci retracement (1.1695) of the uptrend extending from the March 2020 nadir to the yearly high.

However, if the 200-MA remains intact, a rebound back towards former support-turned-resistance at the February low (1.1952) could be on the cards. A daily close above that is needed to bring the March high (1.2133) into play. 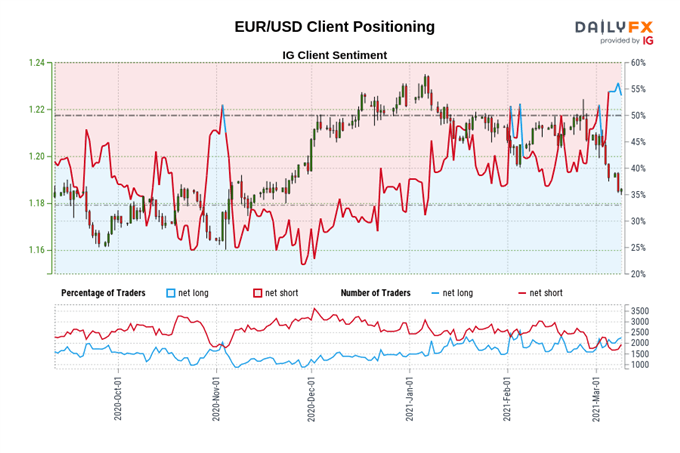 Positioning is less net-long than yesterday but more net-long from last week. The combination of current sentiment and recent changes gives us a further mixed EUR/USD trading bias.