Risk assets pushed higher during Asia-Pacific trade as the relentless selling across global markets slowed and President Joe Biden announced that the US will have enough coronavirus vaccines by the end of May. Australia’s ASX 200 climbed 0.82% on the back of better-than-expected fourth-quarter GDP figures, while Japan’s Nikkei 225 nudged 0.51% higher.

The US Dollar rebounded robustly against its major counterparts at the end of last month, as a rout in global bond markets put a premium on the haven-associated currency. Yields on US 10-year Treasuries surged as much as 49-basis points higher, while 30-year rates climbed 52-basis points. At the same time, inflation expectations drifted lower, opening the door for real rates of return to storm to the highest levels since June of 2020.

However, this move higher in real yields has proved relatively short-lived and could ultimately lead to the Greenback giving up gained ground in the near term. That being said, much will depend on the commentary from several Federal Reserve members, with market participants scrutinizing whether the central bank is concerned by the recent rout in US Treasuries. 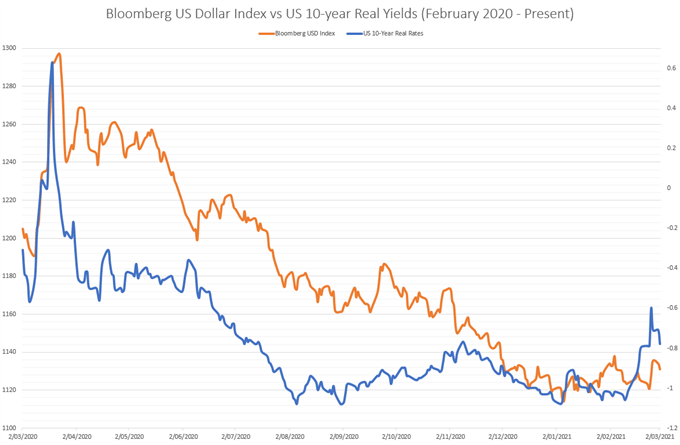 Federal Reserve Bank of Richmond President Thomas Barkin seemed relatively unperturbed by the relentless rise in longer-term yields, stating that “if the driver [behind the move] is news about vaccines, or news about health of the economy, or news about fiscal stimulus, then I think it is a natural reaction”.

Attention now turns to Chairman Jerome Powell’s upcoming speech on Thursday, with a lack of regard surrounding bond markets probably send yields higher, and in turn strengthening the US Dollar. On the other hand, any mention of yield curve control or increasing the rate of the central bank’s bond purchasing program could fuel inflows into Treasury markets and undermine the Greenback against its major counterparts. 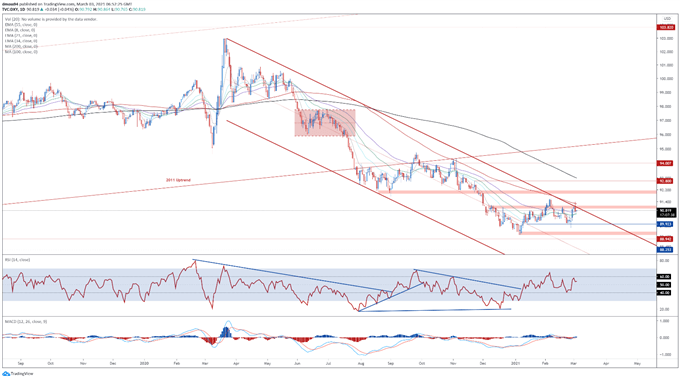 From a technical perspective, the US Dollar Index’s (DXY) outlook remains skewed the downside, as prices continue to track within the confines of a Descending Channel.

A daily close back below the 34-EMA (90.59) would probably neutralize near-term buying pressure and carve a path for price to challenge the February low (89.68). Hurdling that brings the yearly low (89.21) into the crosshairs.