In FX markets, the cyclically-sensitive AUD, NZD, CAD and NOK largely outperformed while the haven-associated USD, JPY and CHF lost ground against their major counterparts. Copper surged to its highest levels in more than nine years on global growth optimism, and yields on US 10-year Treasuries surged to the highest levels since February of 2020.

Powell is expected to reiterate the central bank’s commitment to supporting the economy by keeping interest rates at record lows and continuing to purchase at least $80 billion of Treasury securities and $40 billion of agency-mortgage-backed securities a month “until substantial progress has been made towards the Committee’s maximum employment and price stability goals”.

The chairman may also repeat his calls for more fiscal support to bolster the nation’s nascent recovery, given his previous statement that “it will require a society-wide commitment, with contribution from across government and the private sector” to restore the labour market to pre-pandemic levels.

Further dovish rhetoric from the central bank head, combined with the impending deliver of a substantial fiscal support package, will likely keep the haven-associated US Dollar on the back foot. The House of Representatives is expected to put President Joe Biden’s proposed $1.9 trillion coronavirus-relief package to a vote on Friday.

On the European front, better-than-expected PMI figures out of Germany, and a marked rise in Euro-area inflation in January, may buoy the Euro against its lower-beta counterparts in the near-term. The Euro-area core inflation rate jumped to 1.4% in January, while headline inflation climbed to 0.9%.

This could convince the European Central Bank to hold fire on loosening its monetary policy settings further, despite several Governing Council members flagging the possibility of cutting interest rates further into negative territory.

Positive lfo survey figures out of Germany may also put a premium on the trading bloc’s currency, by suggesting that the region’s largest economy is weathering its recent lockdown better than originally expected.

From a technical perspective, the Euro looks set to extend its rebound higher against the US Dollar as price consolidates below Descending Channel resistance.

With the exchange rate tracking above all six moving averages, and the RSI nudging back above its neutral midpoint, the path of least resistance seems higher.

A daily close above the February high (1.2169) would likely neutralize near-term selling pressure and open the door for buyers to probe psychological resistance at 1.2200. Clearing that brings the yearly high set on January 6 (1.2349) into focus.

However, failing to breach Descending Channel resistance may allow sellers to drive the exchange rate back towards range support at 1.2055 – 1.2075. 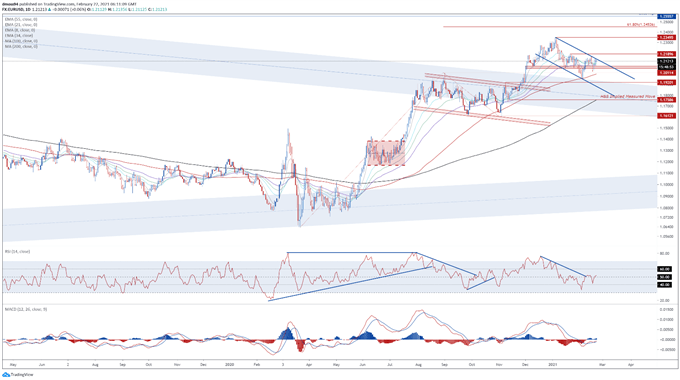 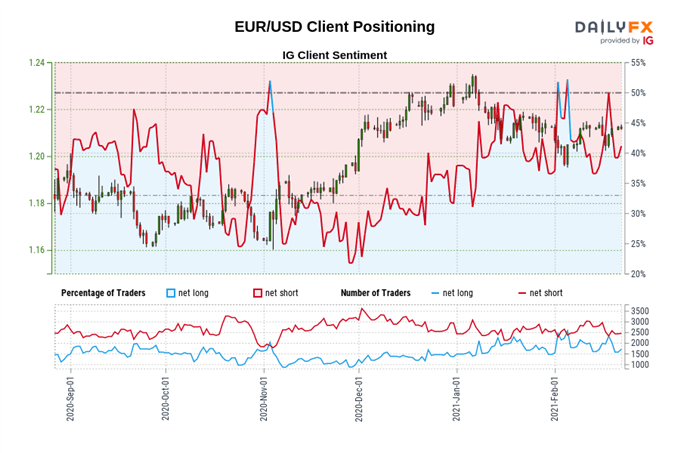