The bellwether S&P 500 stock index suffered the largest daily drop since October, shedding 2.6 percent. An average of Asia-Pacific shares is not far from pacing this dismal performance: regional names are on pace to give back 2 percent. Futures tracking top European equities are pointing aggressively lower ahead of the opening bell in London and on the Continent, hinting at more of the same in the coming hours. 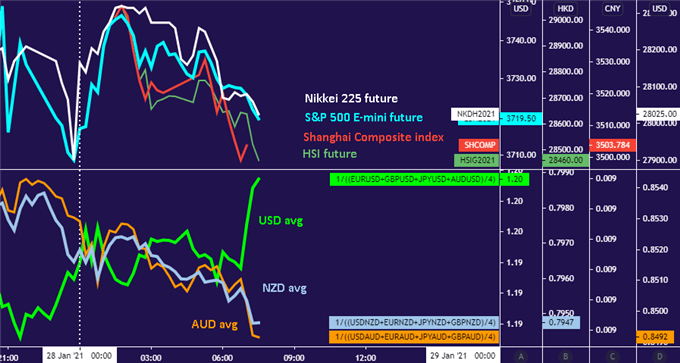 A plethora of explanations for the rout have emerged. Seemingly the most popular narrative blames forced liquidations of short positions in names heavily sold by opportunistic ‘professional’ investors (such as hedge funds) amid a wave of retail buying cheered on by social media outlets such as the WallStreetBets subreddit. Eye-popping performance by the likes of Gamestop is often flagged as evidence.

The tale is an exciting one to ponder, but ultimately seems too fanciful to be a credible catalyst on its own. Consider that the average market capitalization of S&P 500 member companies is about US$65.7 billion, while Gamestop is close to US$24 billion after the latest near-vertical ascent. How many such companies’ shares would need to pop to force liquidation on the scale seen yesterday? Perhaps more than is realistic.

Rather, extreme price moves in pockets of the markets probably speak to a larger macro-level issue: the rally from March 2020 lows in the wake of the initial Covid-inspired collapse and Fed-driven rebound may be out of steam as investors run out of things to look forward to. The US election and surrounding narratives are spent, a Brexit deal is in, and several Covid vaccines have emerged.

On the policy side of the equation, a much-debated top-up of US fiscal stimulus has been passed and the follow-on US$1.9 billion plan championed by newly-installed President Joe Biden is primed for disappointment as the Democrats’ narrow Senate majority forces negotiation downward. Meanwhile, the Fed is in no hurry to expand support, and the present amount of accommodation is probably priced in.

US DOLLAR RALLY SET TO CONTINUE AS LIQUIDATION CONTINUES

Looking ahead, the flight to safety looks likely to continue, attracting capital flows toward the unrivaled liquidity of the Greenback. Fourth-quarter US GDP data headlines the economic calendar, with analysts flagging an annualized growth rate of 4.2 percent. US news-flow has weakened relative to baseline forecasts in recent weeks, opening the door for disappointment that encourages market turmoil.