The US Dollar pulled back in otherwise quiet Asia-Pacific trade. The anti-risk currency enjoyed the largest one-day rise in two months against an average of its top counterparts yesterday in a move that was seemingly animated by safety-seeking capital flows against the backdrop of deteriorating market confidence.

Markets were in a friendlier mood in APAC hours. Regional stock markets added close to 0.6 percent on average. The sentiment-geared Australian and New Zealand Dollars followed suit, as did cyclically-minded commodities like copper and crude oil. The Yen fell alongside the Greenback. 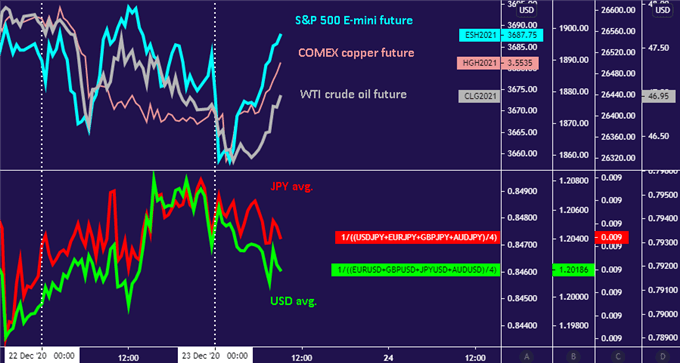 The upbeat backdrop stood in stark contrast to news that US President Donald Trump pushed back on signing the hard-fought Covid relief package amounting to US$900 billion in support. Mr Trump’s opposition spooked markets initially but the rout quickly fizzled.

This may reflect the measure’s overwhelming bipartisan support. Senate Majority Leader Mitch McConnell, a Republican, signaled that his chamber would reconvene next week with the intent of overriding a presidential veto – whether it be an implicit or explicit one – if Mr Trump refuses to oblige.

With that in mind, investors’ rosy disposition may amount to little more than a correction after three days of selling. The proximity of Christmas holiday closures in most of the world’s largest markets may have simply inspired a tactical rebalancing of near-term exposure to a more neutral setting.

Bellwether S&P 500 futures are pointing higher in late APAC trade, signaling that the risk-on tilt across the asset spectrum has scope for a degree of follow-through. The economic calendar is relatively light, with US PCE inflation data and a revised consumer confidence survey from the University of Michigan on tap.