In FX markets, NZD largely outperformed on the back of the nation’s record third-quarter GDP expansion, while the haven-associated JPY and USD continued to slide lower against their major counterparts.

Looking ahead, Euro-area inflation data for the month of November headlines the economic docket alongside the Bank of England’s monetary policy meeting.

As mentioned in previous reports, the notable tightening of restrictions in several European nations could weigh on regional equity markets in the near term, as market participants impatiently await approval of Pfizer and BioNTech’s Covid-19 vaccine.

The European Medicines Agency is scheduled to make a decision on the shot by December 23, with German Health Minister Jens Spahn stating that “we’re doing all we can to get this vaccine approved as soon as possible [and] the goal is to get approval before Christmas”.

This timeline is considerably more conservative than those in the UK and US, given both nations started vaccination programs for high-risk citizens earlier in December, and could gnaw at risk sentiment in the short term.

However, a slew of better-than-expected economic data releases have seemingly underpinned the benchmark EU Stoxx 50 and DAX 30 indices.

Preliminary PMI readings for December suggest that the recent tightening of restrictions isn’t proving to be as detrimental to economic activity as previously expected, with Euro-area composite PMI rising to 49.8 (est. 45.8), manufacturing PMI climbing to 55.5 (est. 53), and services PMI nudging up to 47.3 (est. 41.9).

Nevertheless, there is a possibility that a prolonged wait for vaccine approval could cap the performance of European risk assets in the interim and potentially undermine regional shares.

From a technical perspective, the longer-term outlook for Germany’s DAX 30 index remains skewed to the topside, as prices breach the resistance range at 13350 – 13450 and push to fresh post-crisis highs.

However, bearish RSI divergence suggests that the recent topside push may be running out of steam.

Failure to hold constructively above psychological support could trigger a short-term pullback towards the December 9 high (13459), with a daily close below probably carving a path for prices to challenge the 2020 open.

That being said, with prices tracking firmly above all four moving averages, and the MACD indicator hovering in positive territory, an extended downside move seems relatively unlikely.

With that in mind, remaining constructively perched above 13500 could see the DAX 30 continue moving higher.

A daily close above the January high (13644) is needed to bring the record high set in February (13829) into focus. Clearing that probably opens the door for prices to probe the psychologically imposing 14000 mark. 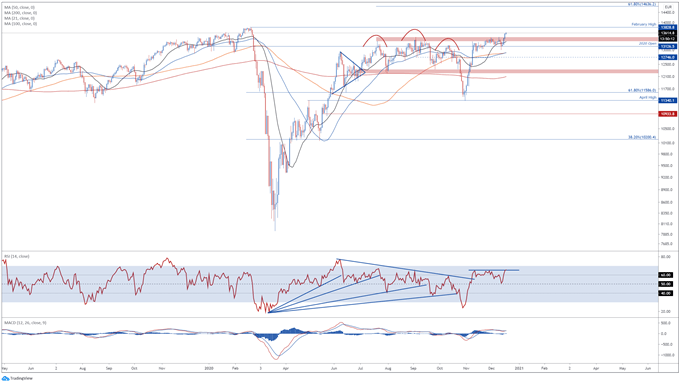 The longer-term outlook for the EU Stoxx 50 index also remains skewed to the topside, as prices burst away from key support at the March high (3467) and push to fresh post-crisis highs.

However, bearish RSI divergence, in tandem with a bearish crossover on the MACD indicator, suggests a short-term pullback could be in the offing.

Sliding back below 3550 could allow sellers to regain control of the index and drive price back towards the 21-day moving average (3513), with a convincing break below probably resulting in a retest of support at the monthly low (3458).

Conversely, a daily close above the December 16 high (3560) would probably signal the resumption of the primary uptrend and clear the way for prices to challenge the January low (3607). 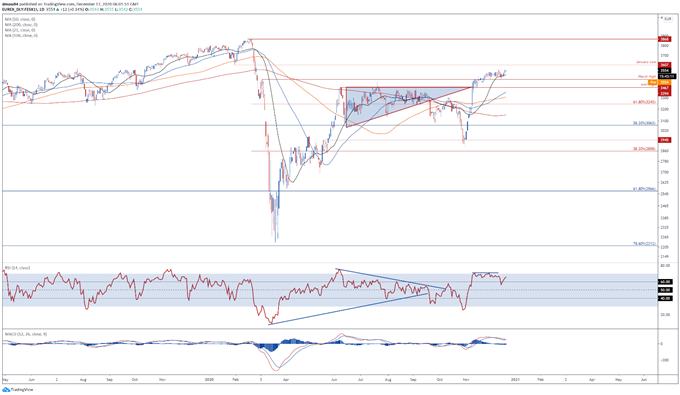