Equity markets moved broadly higher during Asia-Pacific trade as market participants cheered progress in stimulus negotiations and the potential deployment of Pfizer’s coronavirus vaccine in the US this week.

China’s CSI 300 index climbed 0.97% on the back of news that Beijing will step up its fiscal support efforts in the near term.

In FX markets, the extension of Brexit negotiations propelled the British Pound higher against its major counterparts, while the haven-associated USD and JPY continued to lose ground.

Looking ahead, Euro-zone industrial production figures for the month of October headline the economic docket alongside consumer inflation expectations out of the US. 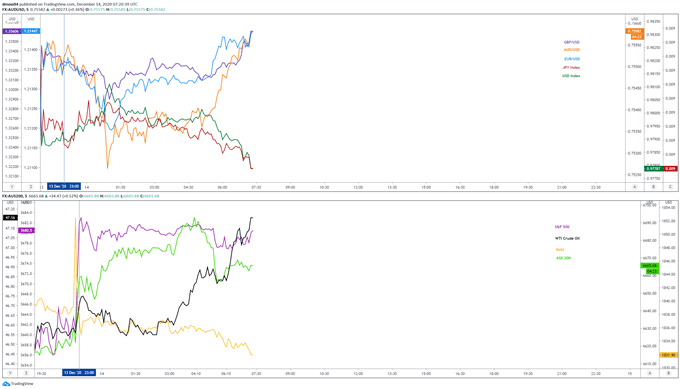 The pair released a joint statement on Sunday evening stating that “despite the exhaustion after almost a year of negotiations, despite the fact that deadlines have been missed over and over, we think it is responsible at this point to go the extra mile”.

These comments hardly point to any form of material progress being made in negotiations, and with Johnson stating “we’re still very far apart on some key things”, it still seems relatively unlikely that a deal will be agreed and ratified before the December 31 deadline.

After all, negotiations remain hamstrung by the same two key issues – fisheries and the level playing field – that have plagued talks in recent months.

Moreover, French European Affairs Minister Clement Beaune has warned that “if there was an agreement and it was not good, we would oppose it with a right of veto”, adding that “I still hope that we can have an agreement, but we will not accept a bad deal for France”.

French President Emmanuel Macron has also reportedly lobbied the EU to push negotiations past the year-end deadline to pressure the UK into conceding ground on several key issues.

With that in mind, the British Pound could be at risk of significant losses in the near term, if an all encompassing free-trade agreement remains elusive in the coming weeks. 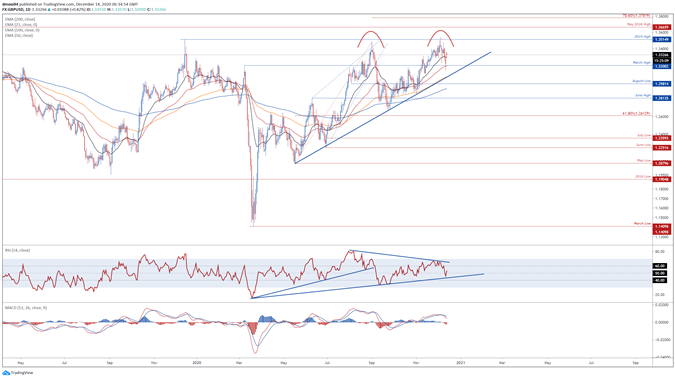 From a technical perspective, GBP/USD rates could be at risk of an extended push lower, as prices carve out a Double Top formation just shy of key psychological resistance at 1.3500.

With the RSI dipping back below 50, and a bearish crossover taking place on the MACD indicator, the path of least resistance looks to favour the downside.

Slipping back below the 21-day moving average and 1.3300 mark could propel price towards confluent support at the March high (1.3200) and uptrend extending from the May low.

Clearing that would probably trigger a more extensive correction and bring the August low (1.2981) and sentiment-defining 200-DMA (1.2925) into focus. 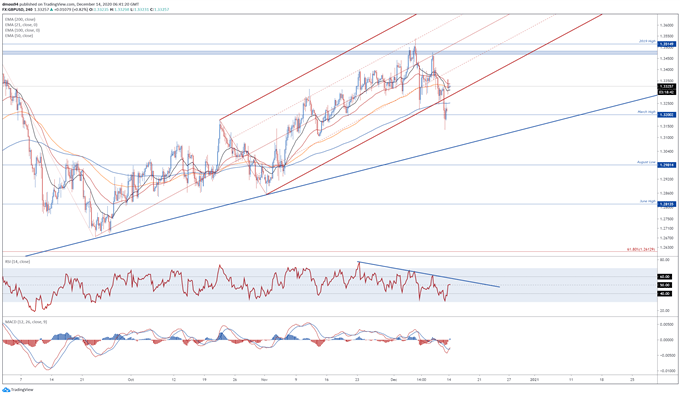 However, zooming into a four-hour chart suggests GBP/USD may extend its recent push higher, as prices gap back above the 200-MA (1.3252) and former support-turned-resistance at the Pitchfork parallel.

That being said, with the RSI continuing to respect the downtrend extending from the November extremes and the MACD indicator tracking firmly below its neutral midpoint, an extensive topside push seems relatively unlikely.

Nevertheless, breaching the December 10 high (1.3376) could neutralize near-term selling pressure and carve a path for price to probe the psychologically imposing 1.34 mark. Hurdling that would probably bring the resistance range at 1.3470 – 1.3480 into focus.

Alternatively, failure to hold above the trend-defining 50-MA (1.3337) may allow sellers to regain control and drive price back towards the 1.3300 mark. Breaking below would probably result in prices closing the gap and challenging support at the March high (1.3200). 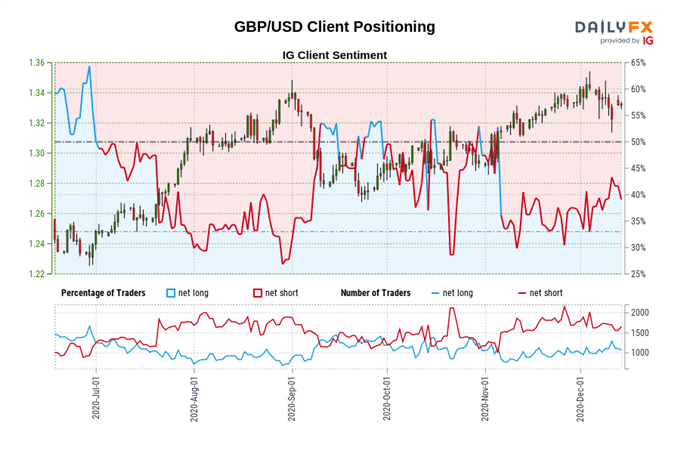