In FX markets, the cyclically-sensitive AUD and NOK largely outperformed while the haven-associated US Dollar continued sliding lower against its major counterparts.

Looking ahead, preliminary US consumer sentiment data for December headlines the economic docket alongside PPI figures for the month of November. 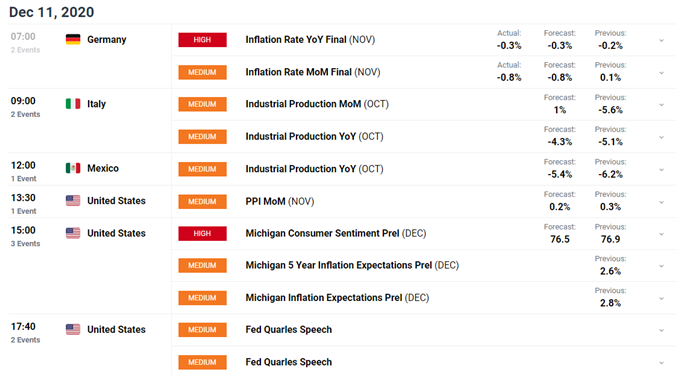 As mentioned in previous reports, the extension of Germany’s nationwide ‘partial’ lockdown – implemented at the start of November – may cap the benchmark DAX 30 index’s potential upside, as cases of the novel coronavirus continue climbing.

With infections tripling since the start of October, Chancellor Angela Merkel and the premiers of Germany’s 16 states opted to protract the current measures until December 20.

However, the notable tightening of restrictions has proved relatively ineffective at driving case numbers lower, with the 7-day average of infections surging above 20,000. 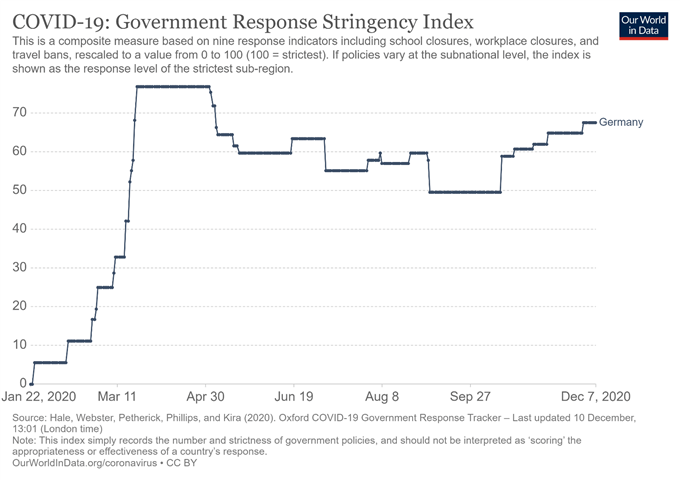 Indeed, Merkel has stressed that “case numbers have stagnated at far too high a level [and] we undoubtedly have some difficult months ahead of us again”.

The Chancellor stated that for restrictions to be loosened, the seven-day incidence rate per 100,000 must drop back below 50 and stay there on a consistent basis. It currently sits at a record 156.

With that in mind, it seems rational to expect that tighter curbs may have to be enforced in the short-term. In fact, Merkel’s chief of staff Helge Braun has flagged the possibility of restrictions being extended until March.

Therefore, the DAX 30 could lose ground in the coming days if the number of infections remains stubbornly elevated, as investors begin to price in more stringent measures. 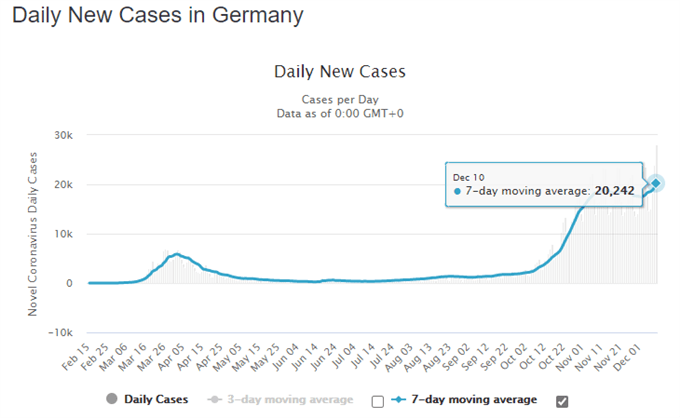 From a technical perspective, the DAX 30 index could be at risk of a short-term pullback as prices struggle to overcome range resistance at 13350 – 13450.

Bearish RSI divergence, in tandem with a bearish crossover on the MACD indicator, suggest that path of least resistance may be skewed to the downside.

Piercing back below the yearly open (13126) on a daily close basis could ignite a downside push towards the trend-defining 50-day moving average (12868). Clearing that would probably open the door for price to challenge the support range at 12200 – 12300.

Alternatively, a daily close above the September high (13464) could neutralize near-term selling pressure and carve a path for price to probe the February high (13829).

Zooming into a four-hour chart hints at further consolidation ahead as the DAX 30 continues to oscillate within the confines of a Symmetrical Triangle.

However, the bias remains skewed to the downside as the RSI slips back below its neutral midpoint and price snaps back below the 100-MA (13269).

Positioning is less net-short than yesterday but more net-short from last week. The combination of current sentiment and recent changes gives us a further mixed DAX 30 trading bias. 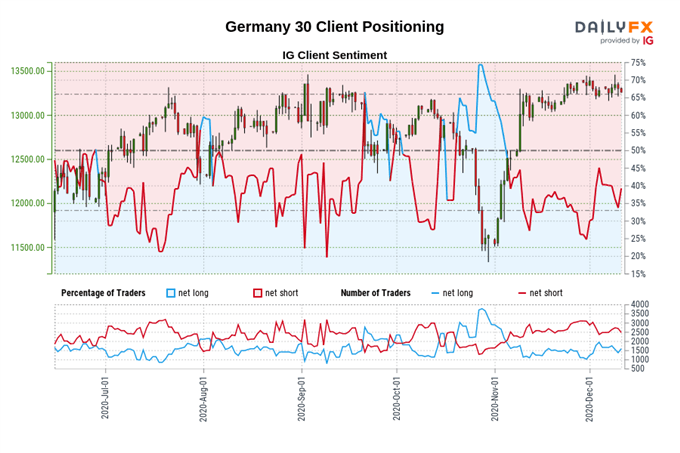