The Australian ASX 200 nudged 0.2% higher as the NAB Business Confidence Index jumped to its highest levels since early 2018.

In FX markets, the haven-associated US Dollar and Japanese Yen gained ground against their major counterparts, while the politically-sensitive British Pound continued its slide lower as no-deal Brexit fears markedly intensified.

A worrying surge in US coronavirus infections may weigh on risk assets in the near term, as the 7-day moving average tracking daily case numbers climbs to just below 200,000.

With the number of coronavirus hospitalizations surging above 100,000, pressure is building on state authorities to tighten coronavirus restrictions.

California Governor Gavin Newsom introduced regional stay-at-home orders over the weekend, after stating that as few as 1,700 intensive care unit beds – out of 7,800 – remain available in the nation’s most populous state. 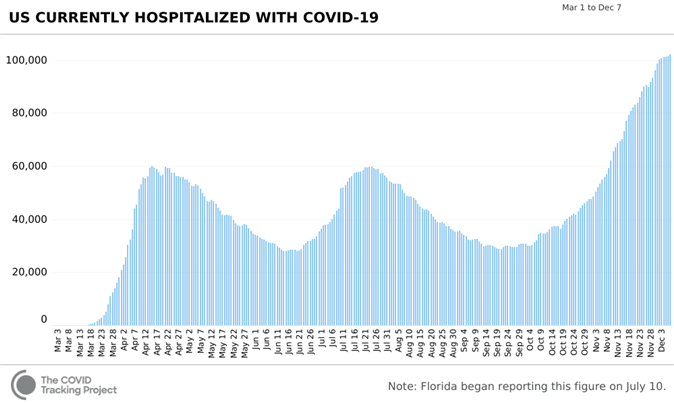 New York Governor Andrew Cuomo has also hinted at the implementation of further shutdowns, stating that “we will manage the hospital system as well as it can be managed, but if you are going to overwhelm the hospital system, then we have no choice but to close down”.

These developments could notably sour market sentiment, given the recent weakness seen in economic data prints.

The non-farm payrolls report for November drastically undershot market expectations, while the unemployment rate fell to 6.7% as fewer people actively looked for work.

However, the marked weakening in economic fundamentals may prompt US policymakers to pass a much-needed stimulus package in the coming days.

Tellingly, Senate Majority Leader Mitch McConnell also hinted at the potential for both sides to come together in a bipartisan fashion, stating that Democrats were showing a “new willingess to engage in good faith”.

That being said, with McConnell circulating a $500 billion draft proposal that he believes is “something that would be signed into law by the president, be done quickly and deal with the things we can agree on now”, it still seems relatively unlikely that these negotiations will bear fruit.

Nevertheless, with both sides of the aisle in agreement that some form of stimulus is necessary, negotiations look set to continue at least in the short term. This may put a floor under the Nasdaq 100, as market participants begin to price in the prospect of further fiscal support. 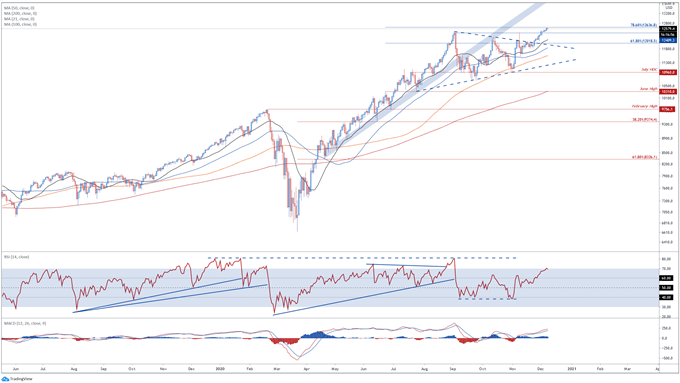 From a technical perspective, the tech-heavy Nasdaq 100 looks at risk of a short-term pullback, as prices struggle to breach key resistance at the 78.6% Fibonacci (12637).

With the RSI dipping back into normal territory and the MACD histogram notably plateauing, the index’s 15% climb from the November low (10957) seems to be running out of steam.

Failure to gain a firm foothold above the 78.6% Fibonacci could generate a correction back towards the September 2 daily close (12409), with a break below bringing the 61.8% Fibonacci (12018) into focus.

Alternatively, a daily close above psychological resistance at 12700 could neutralize near-term selling pressure and carve a path for price to probe the 13000 mark. 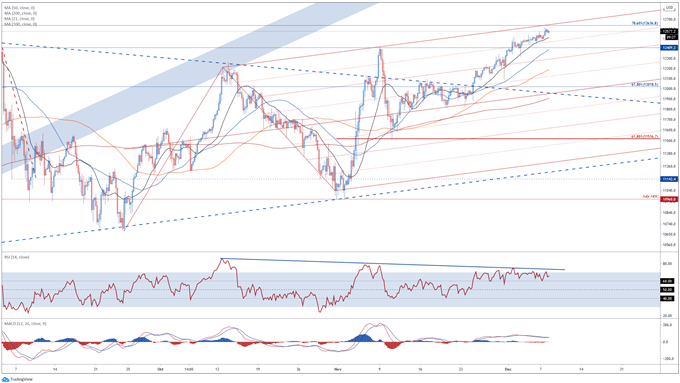 Zooming into a four-hour chart reinforces the prospect of a short-term pullback, with significant RSI divergence hinting at exhaustion in the recent topside push.

With a bearish crossover taking place on the MACD indicator and the slopes of all four moving averages notably flattening, a correction lower looks in the offing.

Slipping back below the 21-MA (12518) could generate a downside push towards psychological support at 12400, with a convincing break below possibly opening the door for price to slide back towards the 61.8% Fibonacci (12018).

However, an extended correction lower looks relatively unlikely given the longer-term outlook for the Nasdaq remains skewed to the topside.

Therefore, a pullback to 12400 could provide an appealing entry for would-be bulls, with a break above confluent resistance at the 78.6% Fibonacci (12637) and Pitchfork parallel needed to signal the resumption of the primary uptrend.