Month-end flows made for a mixed day of trade during the Asia-Pacific session, as investors mulled coronavirus vaccine developments.

The ASX 200 index fell 1.26% as trade tensions between Australia and China continued to escalate, while Japan’s Nikkei 225 slipped 0.8% lower.

Gold extended its slide lower alongside silver, while crude oil prices plunged over 2% after OPEC+ officials failed to reach agreement on delaying a planned output hike in January.

Looking ahead, preliminary inflation data out of Germany headlines the economic docket alongside a speech from European Central Bank President Christine Lagarde. 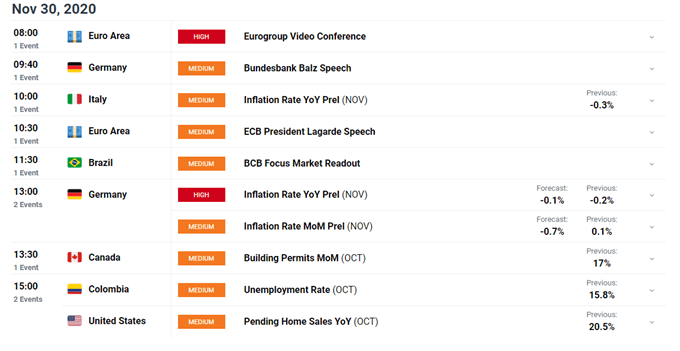 Extended Lockdown to Weigh on DAX 30

The extension of Germany’s nationwide ‘partial’ lockdown – implemented at the start of November – may cap the benchmark DAX 30 index’s potential upside, as the nation’s total coronavirus cases surpass 1 million.

With infections tripling since the start of October, Chancellor Angela Merkel and the premiers of Germany’s 16 states opted to protract the current measures until December 20.

However, the lockdown has proved relatively ineffective at driving case numbers lower, with the 7-day average of infections continuing to hover just under 18,000. 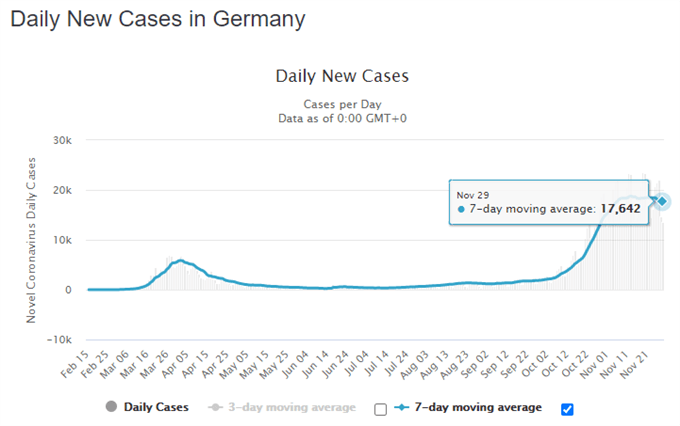 Indeed, Merkel has stressed that “case numbers have stagnated at far too high a level [and] we undoubtedly have some difficult months ahead of us again”.

The Chancellor stated that for restrictions to be loosened, the seven-day incidence rate per 100,000 must drop back below 50 and stay there on a consistent basis. It currently sits at just under 140.

With that in mind, it seems rational to expect that tighter curbs may have to be enforced in the short-term. In fact, Merkel’s chief of staff Helge Braun has flagged the possibility of restrictions being extended until March.

Therefore, the DAX 30 could lose ground in the coming days if the number of infections remains stubbornly elevated, as investors begin to price in more stringent measures. 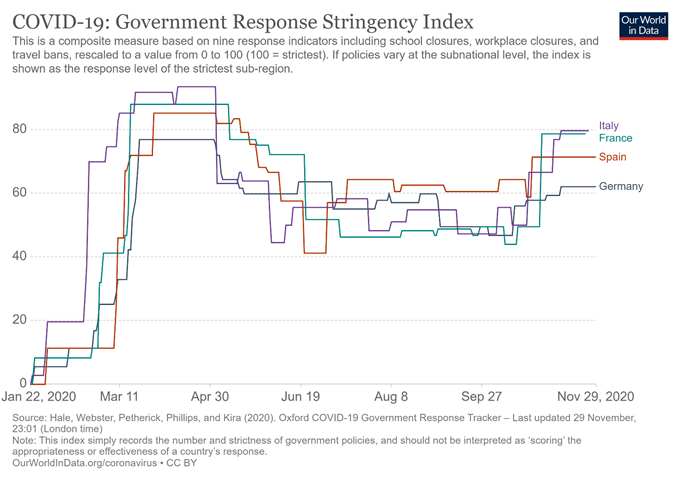 That being said, the federal government’s decision to expand its budget in 2021 may underpin regional risk assets.

As mentioned in previous reports, the International Monetary Fund had implored the German government to provide additional fiscal aid.

The IMF’s mission chief for Germany Shekhar Aiyar stressed that “the more severe a recession, the more you should err on the side of generosity [and] Germany is in the somewhat enviable position of having ample fiscal space”.

Clearly German policymakers have heeded these warnings, announcing almost €500 billion in total spending and doubling the amount of new debt budgeted for next year.

The government also moved to extend bridge aid for companies until June next year, with the program currently allowing businesses affected by restrictions to receive up to 75% of their previous year’s revenue in compensation.

These moves may soothe investors’ concerns and limit the DAX 30 index’s downside. 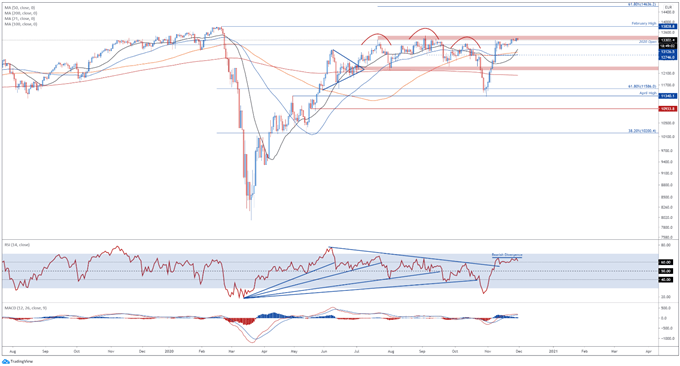 From a technical perspective, Germany’s benchmark DAX 30 index could be at risk of a short-term correction lower, as price begins to probe the key resistance range at 13350 – 13450.

Bearish RSI divergence, combined with a potential bearish crossover on the MACD indicator, imply that the path of least resistance is lower.

Failure to clear the September high (13464) could ignite a pullback towards the 2020 open, with a break below opening the door for price to challenge the trend-defining 50-day moving average (12760).

Alternatively, a daily close above 13500 would likely signal the resumption of the primary uptrend and bring the yearly high (13829) into focus. 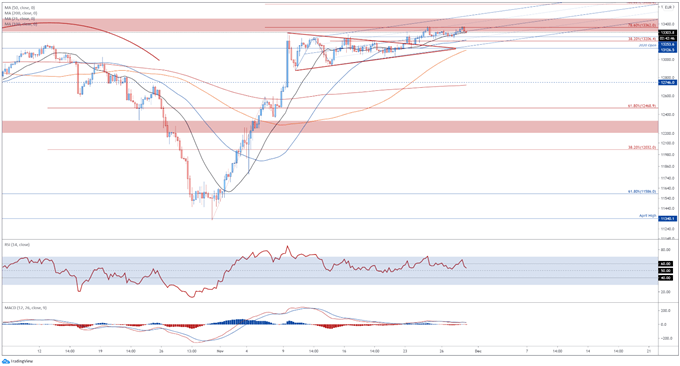 Zooming into a four-hour chart reinforces the bearish outlook depicted on the daily timeframe, as the DAX fails to pierce through the 78.6% Fibonacci (13362) and slips back below the 21-MA (13300).

With the RSI slipping below 50 and the slopes of all four moving averages notably plateauing, further declines look likely.

Conversely, gaining a firm foothold above the November 25 high (13372) could neutralize near-term selling pressure and carve a path for price to probe the yearly high (13828).