In FX markets, the cyclically-sensitive AUD and NZD nudged marginally higher while the haven-associated US Dollar continued its slide lower.

Brexit Talks to Weigh on GBP

The stern warning from the European Union’s chief negotiator to his British counterpart could undermine the politically-sensitive GBP in the near term.

Michel Barnier has reportedly warned UK chief negotiator David Frost that the EU will pull out of Brexit negotiations within 48 hours, if the UK fails to compromise on several key issues.

Of course, this may be just another political move to put pressure on Prime Minister Boris Johnson and his government. After all, failure to ratify a Free Trade Agreement (FTA) would be detrimental to all parties involved. 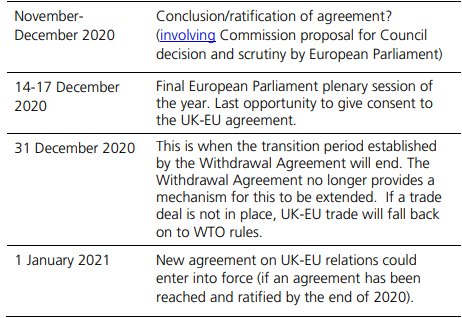 However, with European Commission President Ursula von der Leyen stating that “there are still three issues that can make the difference between a deal and no deal” and the December 31 deadline fast approaching, the UK may yet tumble out of Europe without a ratified trade agreement.

That being said, von der Leyen reiterated that “we will do all in our power to reach an agreement [and] we’re ready to be creative”.

Nevertheless, the lack of any meaningful progress may begin to gnaw at regional investors’ sentiment and weigh on the British Pound against its major counterparts. 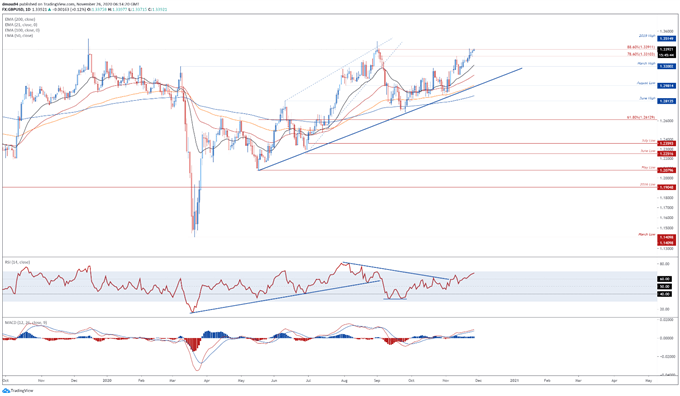 However, with the MACD histogram notably plateauing and the RSI struggling to push above 70, a reversal lower looks in the offing.

Failure to gain a firm foothold above 1.34 on a daily close basis would probably ignite a pullback towards the November 11 high (1.3314), with a break below brining the March high (1.3200) into play. 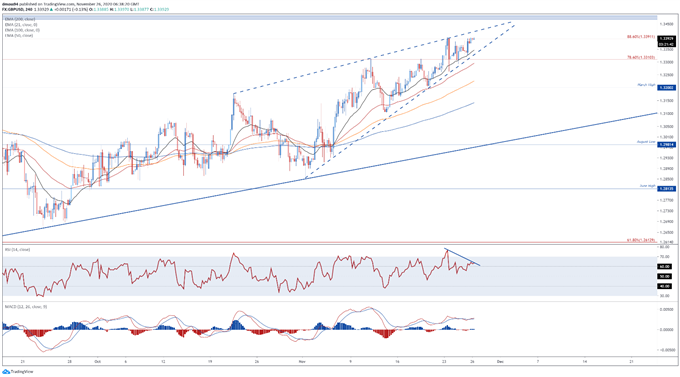 Zooming into a four-hour chart bolsters the bearish outlook depicted on the daily timeframe, as price carves out a bearish Rising Wedge reversal pattern.

Significant bearish RSI divergence is indicative of fading bullish momentum and may encourage would-be sellers if the 88.6% Fibonacci (1.3391) continues to stifle buying pressure.

Breaching the 78.6% Fibonacci (1.3310) is probably required to validate the bearish pattern and propel price back towards the March high (1.3200).

Alternatively, pushing above psychological resistance at 1.3400 would likely neutralize near-term selling pressure and bring the resistance range at 1.3470 – 1.3480 into play. 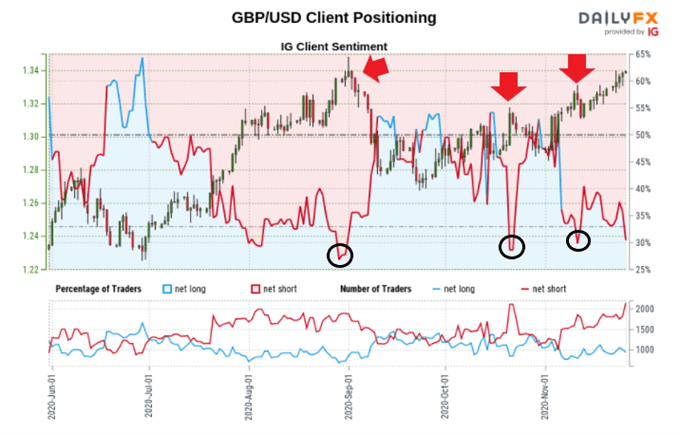 Having said that, extreme short positioning (>70%) seems to have coincided with a turn lower in the exchange rate multiple times since GBP/USD set the yearly high, suggesting a near-term reversal could be on the cards.