Asian equity markets climbed higher during Asia-Pacific trade, after the presidential transition process was triggered by the General Services Administration.

In FX markets, the haven-associated USD and JPY continued to slide lower against their major counterparts, while the cyclically-sensitive NOK, CAD and AUD largely outperformed.

The New Zealand Dollar surged to its highest levels in over two years after the local government called for the Reserve Bank of New Zealand to add housing prices to its remit.

Gold and silver continued to lose ground as yields on US 10-year Treasuries held steady at 86 basis points.

Looking ahead, the US consumer confidence release for November and housing price data for the month of September headline the economic docket alongside speeches from European Central Bank President Christine Lagarde and several members of the Federal Reserve.

The US small-cap benchmark Russell 2000 has stormed higher this month, buoyed by a flurry of positive vaccine results and resilient economic data.

The index has outperformed the S&P 500, Nasdaq and Dow Jones as investors rotate capital into those sectors most impacted by the coronavirus pandemic.

Clinical results showing that the vaccine developed by the University of Oxford and AstraZeneca was, on average, 70% effective in preventing infections has fuelled the recent sectoral rotation, building on strong results from Pfizer and Moderna earlier in the month. 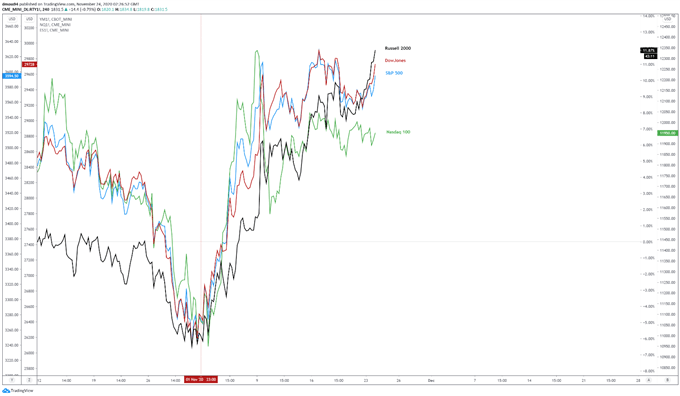 Although AstraZeneca’s vaccine is less efficacious than the mRNA shots developed by Pfizer and Modern, it can be stored at above-freezing temperatures, which will likely allow for an easier transportation and distribution process.

The promising results suggest that the deployment of these vaccines could successfully suppress the coronavirus in 2021 and allow economic activity to return to pre-pandemic levels.

Moreover, recent economic data prints signalled the steepest month of expansion in US business activity since March 2015, despite a record surge in coronavirus infections and the tightening of restrictions in several states.

The IHS Markit Composite PMI climbed to 57.9 in November, while manufacturing PMI rose to 56.7 and services PMI jumped to 57.7, preliminary estimates showed.

Of course, given these are preliminary estimates and the US is averaging over 160,000 new infections a day, the final release could be drastically different.

Nevertheless, vaccine optimism and resilient economic data may continue to put a premium on the pandemic-sensitive Russell 2000 and Dow Jones indices.

The initiation of the presidential transition process may also propel US benchmark equity indices higher in the coming days, alongside President-elect Biden’s market-friendly pick for Treasury Secretary.

After a more than two week delay the General Services Administration finally moved to provide the incoming Biden administration with the federal resources needed to assist in a smooth transition of power.

GSA chief and Trump appointee Emily Murphy stated in a letter to Mr Biden that “because of recent developments involving legal challenges and certifications of election results, I am transmitting this letter today to make those resource and services available to you”.

The battle ground state of Michigan certified its election results on Monday, just days after certification in Georgia, while Minnesota and Nevada – both won by Biden – are scheduled to certify later today.

Although this hardly counts as a concession from President Donald Trump, it suggests that we may be moving closer to that outcome.

Furthermore, news that the President-elect plans to nominate former Federal Reserve Chairwoman Janet Yellen could underpin risk assets in the near term, given her stance on fiscal spending and relationship with current Fed Chair Jerome Powell.

Yellen has consistently called for additional fiscal support and has warned of the dangers of prematurely withdrawing government stimulus.

To that end, the potential for a smooth presidential transition and a more collaborative relationship between the Federal Reserve and White House may underpin risk assets in the medium term. 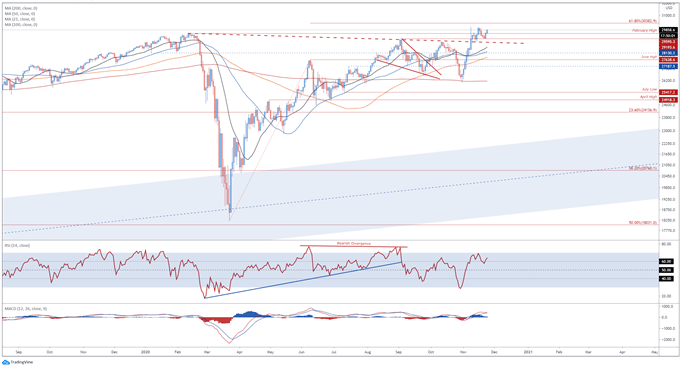 The technical outlook for the Dow Jones Industrial Average (DJIA) seems overtly bullish, as prices hold constructively above support at the February high (29595) and eye a push to retest the yearly high (30097).

With the RSI climbing back above 60 and the MACD indicator rising to its highest levels since early September, the path of least resistance looks to favour the upside.

A daily close above 30000 is probably required to neutralize selling pressure and bring the 61.8% Fibonacci expansion (30383) into play. Clearing that may set the stage for a push towards the psychologically imposing 31000 mark.

Alternatively, slipping back below the September high (29194) may ignite a pullback towards the trend defining 50-day moving average (28227). 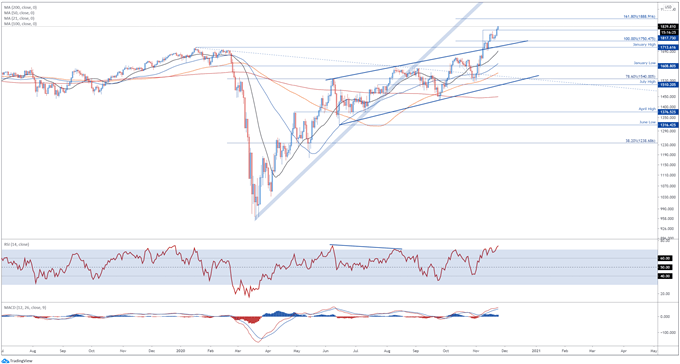 The Russell 2000 index looks poised to continue its push to record highs, as the RSI surges to its most extreme levels since early June.

Gaining a firm foothold above the 1890 mark would probably open the door for prices to probe the psychologically pivotal 1900 level.