Haven inflows buoyed the US Dollar and Japanese Yen while the risk-sensitive Australian dollar drifted lower despite positive employment figures.

Looking ahead, a speech from European Central Bank President Christine Lagarde and US existing home sales for October headline the economic docket. 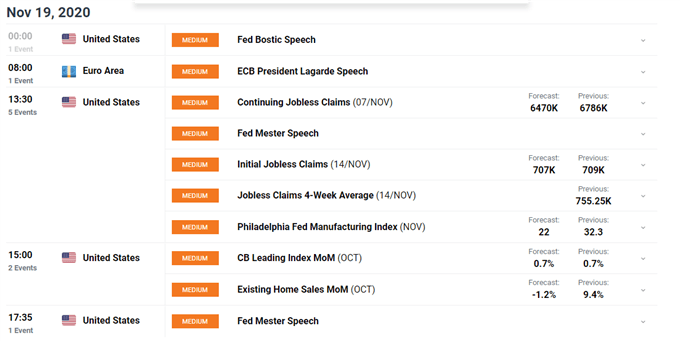 The S&P 500 index has struggled to establish a firm foothold above the landmark 3600 level despite a flurry of positive coronavirus vaccine headlines, as surging infection numbers force regional authorities to tighten restrictions in several US states.

Pfizer announced that it will seek emergency authorization from health regulators to begin distribution after reporting that its vaccine was 95% effective in clinical trials. This means that if regulators approve, the shot could go into distribution by the end of this year.

Moderna is also expected to ask federal health authorities for approval of its vaccine by early December, after announcing it was 94.5% effective earlier this week.

One would expect that risk assets would gain ground on the back of these developments. However, the backdrop of rising Covid-19 case numbers and tightening restrictions seems to have notably weighed on market sentiment. 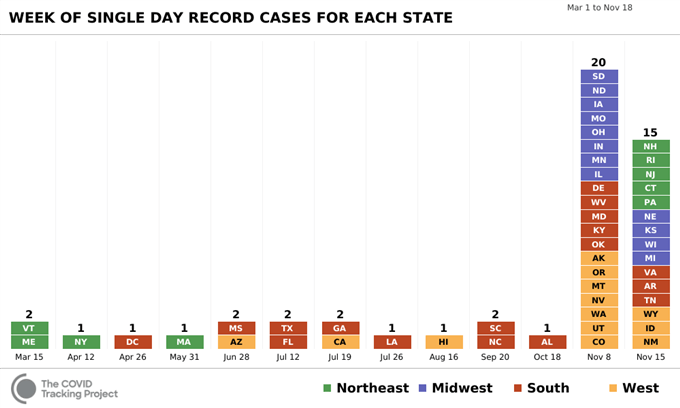 Thirty-five states have recorded a record daily increase in infections in the last two weeks, while the total number of people hospitalized with coronavirus has surged to just under 80,000 – surpassing the previous peaks in April and July by over 20,000.

This has forced authorities in 15 states to markedly tighten restrictions, ranging from the closure of schools in New York City to the issuance of a 30-day stay-at-home advisory in Chicago.

With seasonal factors suggesting that the case count may climb in the coming weeks, the imposition of further restrictions looks reasonably likely.

Consequently, liquidation of risk-sensitive positions may take place in the near term if national health outcomes continue to deteriorate. 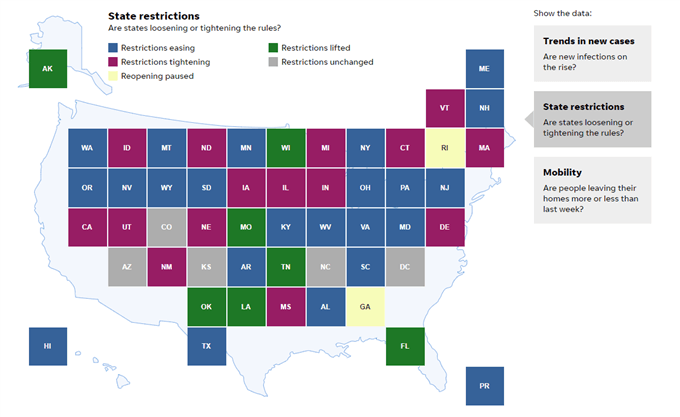 That being said, the dovish stance of the Federal Reserve may limit the potential downside for the S&P 500 index, given recent indications that a shift in the central bank’s bond purchasing program could be on the table.

Chairman Jerome Powell and his colleagues discussed the central bank’s asset purchases and “the ways in which we can adjust the parameters of it to deliver more accommodation if it turns out be appropriate” at the FOMC monetary policy meeting on November 6. 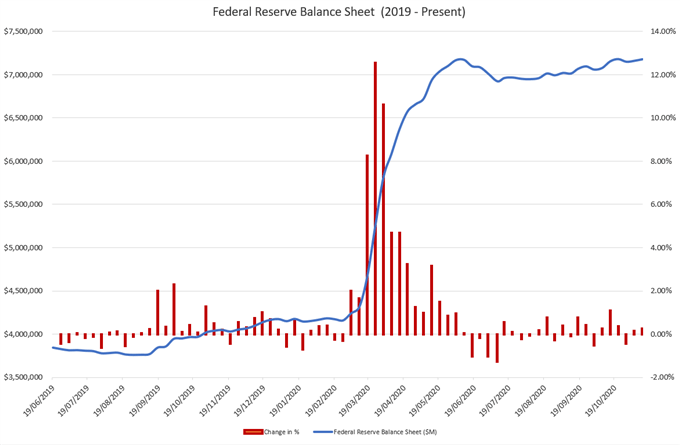 Considering the US is currently averaging over 150,000 new infections a day and the Fed’s belief that “the ongoing public health crisis will continue to weigh on economic activity, employment, and inflation in the near term”, additional monetary support looks more than likely.

Moreover, it seems relatively unlikely that Congress will pass a stimulus package this side of President-elect Biden’s inauguration on January 20.

This could pressure the Federal Reserve to pick up the slack in the interim and in turn put a floor under the benchmark S&P 500. 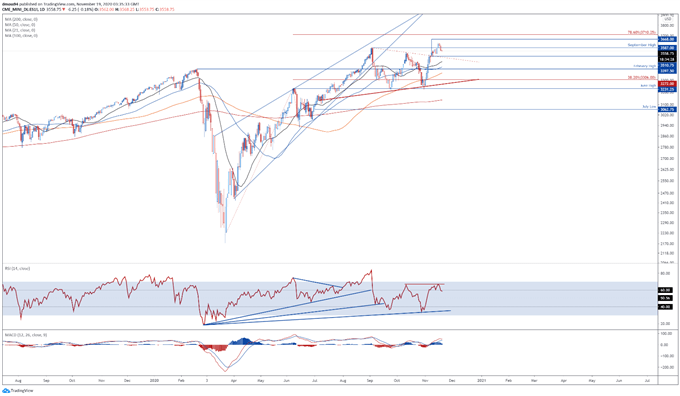 From a technical perspective, the S&P 500 seems at risk of reversing lower after failing to remain constructively perched above the previous all-time high set in September (3587).

Bearish RSI divergence, in tandem with a potential ‘death cross’ on the MACD indicator, suggests the path of least resistance favour the downside.

Prices look poised to pullback towards the November 6 high (3510.75) and psychological support at 3500.

Breaching that would probably neutralize short-term buying pressure and open the door for price to probe the February high (3397.50).

Alternatively, an extended topside push could be on the cards if support holds firm, with a daily close above the November 16 high (3637) needed to signal a resumption of the primary uptrend. 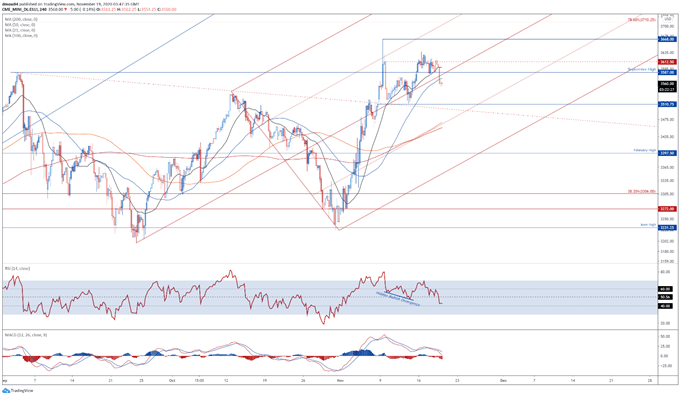 Zooming into a 4-hour chart hints at further losses, as price slices back below Pitchfork median support and the trend-defining 50-MA (3572).

Clearing support at 3550 would probably ignite a push towards the November 6 breakaway gap (3510), with a break below needed to bring the sentiment-defining 200-MA (3456) into play.

Alternatively, climbing back above the September high (3587) may clear a path to retest the yearly high (3668). 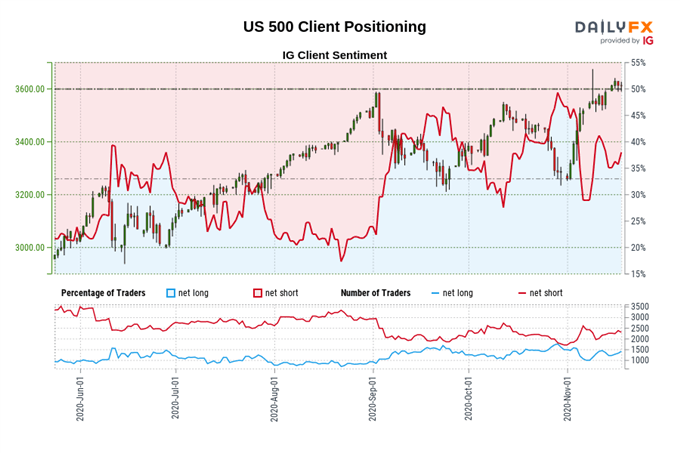 We typically take a contrarian view to crowd sentiment, and the fact traders are net-short suggests the S&P 500 prices may continue to rise.