Japan’s Nikkei 225 soared over 2% on the back of better-than-expected GDP results and the signing of the world’s largest free trade agreement, known as the Regional Comprehensive Economic Partnership (RCEP).

The haven-associated US Dollar and Japanese Yen continued to lose ground against their major counterparts, while the cyclically-sensitive AUD, NZD, CAD and NOK all largely outperformed.

Looking ahead, a slew of speeches from several members of the European Central Bank and Federal Reserve headline the economic docket. 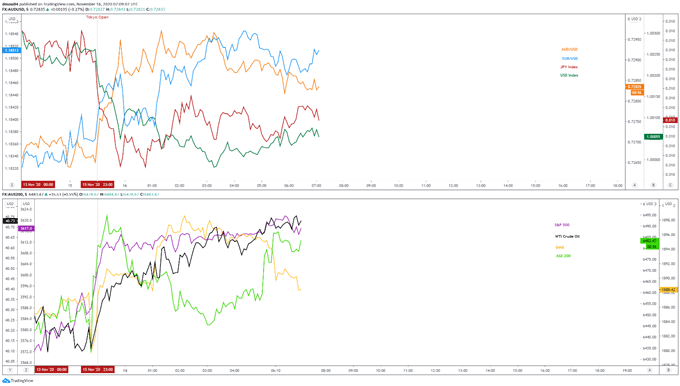 Gold prices have notably consolidated since surging to a record high on the 7th of August, due in part to the absence of additional fiscal aid and the Federal Reserve’s wait-and-see approach to monetary policy.

The marked sell-off in US Treasuries has also hampered the performance of the anti-fiat asset, with 10-year yields climbing over 47 basis points since bottoming at 0.504% on August 6th.

However, the longer-term outlook for bullion remains constructive given recent suggestions from members of the Federal Reserve that a shift in the central bank’s bond purchasing program could be on the table. 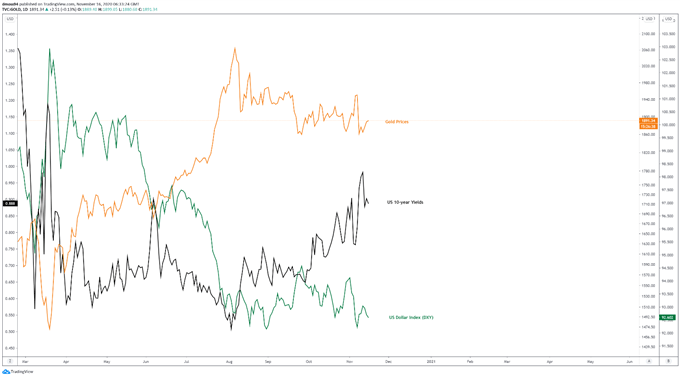 Chairman Jerome Powell and his colleagues discussed the central bank’s asset purchases and “the ways in which we can adjust the parameters of it to deliver more accommodation if it turns out to be appropriate” at the FOMC monetary policy meeting on November 6.

Given daily coronavirus cases continue to surge nationally and the Fed’s belief that “the ongoing public health crisis will continue to weigh on economic activity, employment, and inflation in the near term”, additional monetary support looks more than likely.

Moreover, with Senate Majority Leader Mitch McConnell taking over from Treasury Secretary Steven Mnuchin in fiscal support negotiations, it seems relatively unlikely that Congress will pass a stimulus package before President-elect Biden’s inauguration on January 20. This could pressure the Federal Reserve to pick up the slack in the interim. 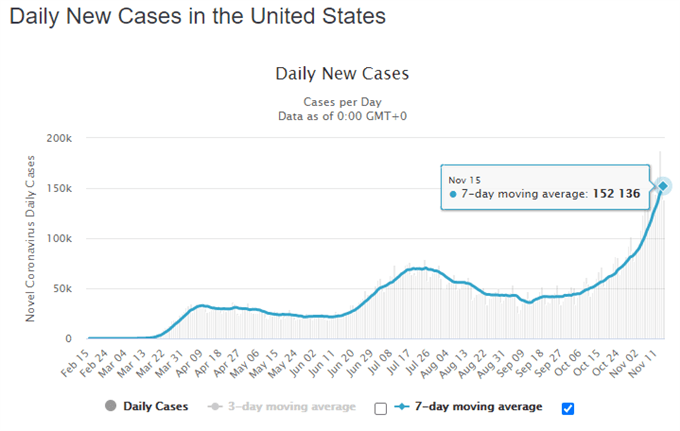 Ebbing vaccine optimism may also buoy precious metals in the coming days, as the sectoral rotation into value-related stocks – which have struggled in the wake of the Covid-19 pandemic – begins to subside.

Investors dumped bonds and piled into equity markets after Pfizer reported that its coronavirus vaccine was more that 90% effective in clinical trials. This may prove short-lived however, given the notable concerns surrounding transport, storage and distribution of the vaccine.

After all, the shots require a storage temperature of -70 degrees Celsius and two doses are needed to successfully inoculate a subject. This reality may temper the current sectoral rotation and direct capital back into bond markets, compressing bond yields and in turn supporting gold prices. 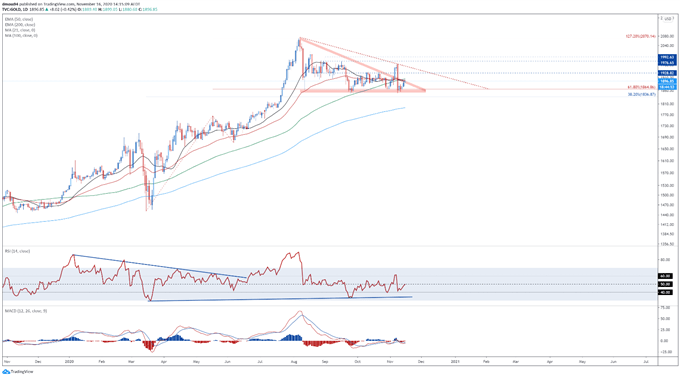 The technical outlook for gold prices remains skewed to the topside, as price holds firmly above key support at the 61.8% Fibonacci (1864.86).

However, a near-term pullback could be in the offing if resistance at the trend-defining 50-day moving average (1899.89) holds firm.

That being said, an extended turn lower seems relatively unlikely, as the RSI bounces back towards its neutral midpoint and the MACD eyes a bullish cross above its ‘slower’ signal line.