Australia’s ASX 200 index jumped 1.72% after the Westpac Consumer Confidence Index rose to its highest reading since late 2013, while Japan’s Nikkei 225 index surged over 1.7%.

The haven-linked US Dollar continued to lose ground against its major counterparts while the cyclically-sensitive Australian Dollar and Norwegian Krone largely outperformed.

The New Zealand Dollar burst higher after the Reserve Bank of New Zealand held interest rates steady at 0.25%. Gold and silver nudged higher despite a 2 basis point rise in US 10-year Treasury yields.

Dose of Reality to Weigh on European Asset Prices

European equity markets have soared higher in recent days, on the back of positive coronavirus vaccine progress and the expectation of a more diplomatic approach to foreign policy under President-elect Joe Biden’s administration.

However, there is a possibility that investors are getting ahead of themselves given the deteriorating health and economic conditions in several European nations.

After all, Europe’s benchmark EU Stoxx 50 index has surged just under 20% since the 30th of October despite the European Union’s two largest economies, France and Germany, announcing month-long national lockdowns to combat the record increase in infections.

Indeed, France and Italy recorded the highest rise in Covid-19 deaths since April on November 10, while German authorities have hinted at extending current restrictions if outbreaks aren’t successfully supressed.

Moreover, the Euro-area’s ZEW Economic Sentiment Index fell by 19.5 points in November to its lowest levels since April, as investors lose confidence in the region’s economic recovery amid the tightening of restrictions.

The vaccine itself – developed by Pfizer and BioNTech – also calls into question the optimistic reaction seen across multiple asset classes recently, as concerns regarding transport, production and storage begin to surface.

Granted, 90% efficacy is notably higher than even the most optimistic expectations for a first-generation vaccine.

However, with the shots requiring a storage temperature of -70 degrees Celsius and two doses needed to successfully inoculate a subject, there is a distinct possibility that this vaccine will only be distributed to a limited number of nations.

Therefore, European asset prices may slide lower in the coming days as investors contemplate the reality that a vaccine may not be available for mass distribution until mid-2021.

Having said that, the dovish stance of the European Central Bank may limit the downside for regional risk assets, as Executive Board member Isabel Schnabel states that “in light of the second wave of Covid-19 infections and renewed lockdowns, further monetary policy support is required to safeguard favourable financial conditions and underpin economic activity in the face of a deteriorating growth outlook”.

The Governing Council is expected to expand its €1.35 trillion Pandemic Emergency Purchase Program (PEPP) in December, despite spending just over half of the dedicated funds so far and the suggestions by some committee members that the “flexibility of the PEPP suggested that the net purchase envelope should be a considered a ceiling rather than a target”.

In fact, President Christine Lagarde confirmed that “we are going to use all the instruments that we have with the entire flexibility that we have, and I’m clearly referring to PEPP more than others, to address the situation and to address any development of the situation”.

Therefore, the expectation of further monetary easing may underpin regional equity markets in the near term and limit potential losses if sentiment notably sours. 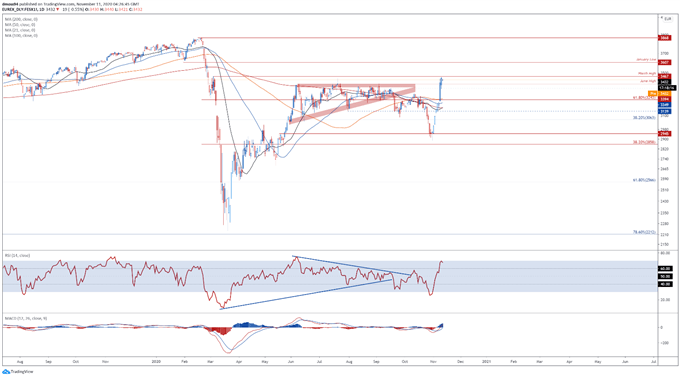 From a technical perspective, the benchmark EU Stoxx 50 index looks poised to reverse lower after failing to breach key resistance at the March high (3467).

The development of the RSI hints that the 20% rally from the October low (2887) may be running out of steam, as the oscillator notably swerves away from overbought territory.

A break back below the June high (3394) would probably generate a pullback towards confluent support at the 100-day moving average and 61.8% Fibonacci (3242).

Conversely, a daily close above the March high (3467) could signal the resumption of the primary uptrend and bring the January low (3607) into focus. 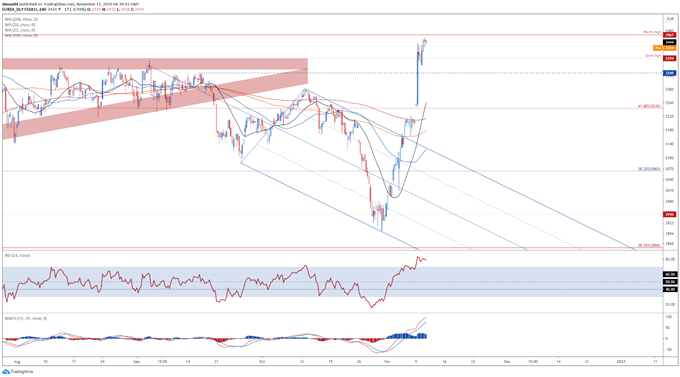 Zooming into a 4-hour chart hints at a short-term pullback, as the RSI diverges with price and fails to confirm the move to higher highs.

Conversely, a break above the March high (3467) and psychologically imposing 3500 level could carve a path for price to test key resistance at the January low (3607).