The haven-associated US Dollar continued to slide lower against its major counterparts while the Japanese Yen clawed back lost ground.

Looking ahead, the ZEW Economic Sentiment Index release out of Germany and the Euro-area headlines the economic docket alongside a speech from Federal Reserve Governor Lael Brainard.

US benchmark indices stormed higher after clinical trial results showed that the vaccine developed by Pfizer and BioNTech proved to be 90% effective in protecting people from the novel coronavirus.

The S&P 500 index surged over 3.2% and the Dow Jones Industrial Average soared 4.86%, as market participants cheered the promising developments.

However, both indices have since retraced much of their respective topside pushes after Senate Majority Leader Mitch McConnell pushed for a “targeted pandemic relief” bill, in light of the positive vaccine developments and the recent drop in the US unemployment rate. 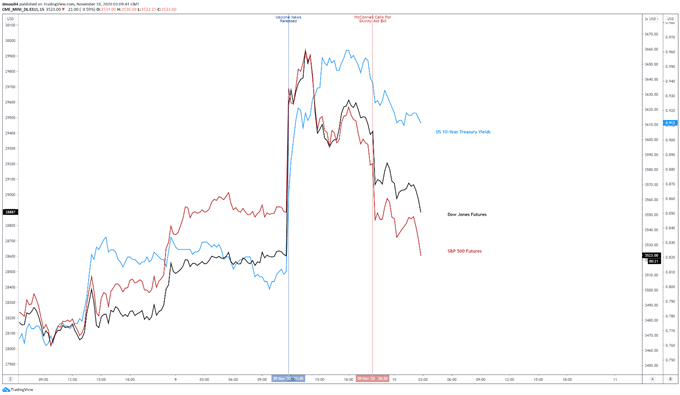 The unemployment rate declined by a full percentage point to 6.9% in October, drastically exceeding consensus estimates that called for a more modest 0.2% fall.

This market reaction suggests that the size of a much-needed fiscal stimulus package may have a greater impact on near-term price action than vaccine developments.

Indeed, with Pfizer’s initial production capacity for 2020 limited to 50 million doses and the company stating that each dose of the vaccine takes two shots, it appears mass vaccination won’t be possible until mid-2021.

Nevertheless, with the US consistently recording over 100,000 cases of Covid-19 a day, market sentiment may remain positive in the near term as investors begin to see light at the end of the tunnel. 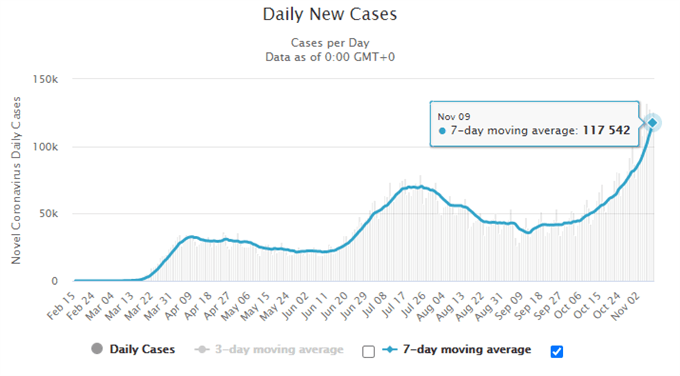 There is also a distinct possibility that market participants will continue to price in the outside chance of a ‘Blue Wave’ scenario – where Democrats control the White House, Senate and the House – as two of the Senate races in Georgia are pushed to January 5 runoffs.

As it stands, Republicans are expected to retain their majority, which would probably hobble President-elect Biden from moving forward with legislation that doesn’t have GOP buy-in.

In one way this could be market positive, with political gridlock hampering the Biden administration from reversing the Trump tax cuts.

However, it could also prevent the President-elect from passing an extensive fiscal stimulus package, as Senate Republicans refuse to nudge above $500 billion while Democrats call for closer to $2 trillion.

Therefore, the medium-term outlook for risk-sensitive assets may hinge on who controls the Senate, with a Democratic sweep probably buoying asset prices as investors price in a more substantial fiscal aid package. 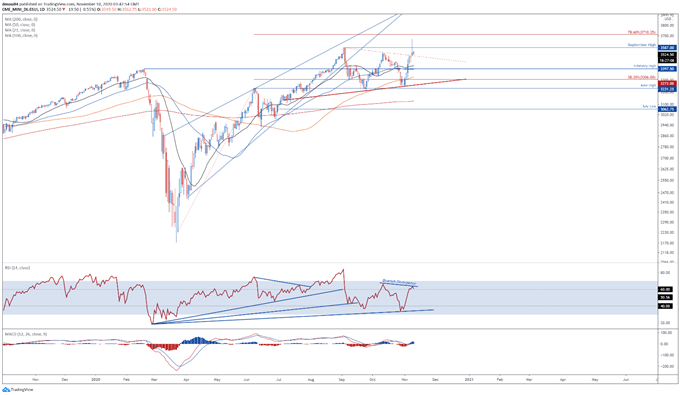 From a technical perspective, the benchmark S&P 500 index is at risk of reversing lower after sellers hammered price back below key resistance at the September high (3587), forming a bearish Shooting Star candle just above the psychologically imposing 3500 mark.

The notable flattening of the trend-defining 50-day moving average (3395), in tandem with bearish RSI divergence, suggests the path of least resistance is lower.

Conversely, a push to fresh yearly highs could be on the cards if support at the 3500 mark holds firm, with a daily close above the September high (3587) needed to bring the November 9 high (3668) into focus. 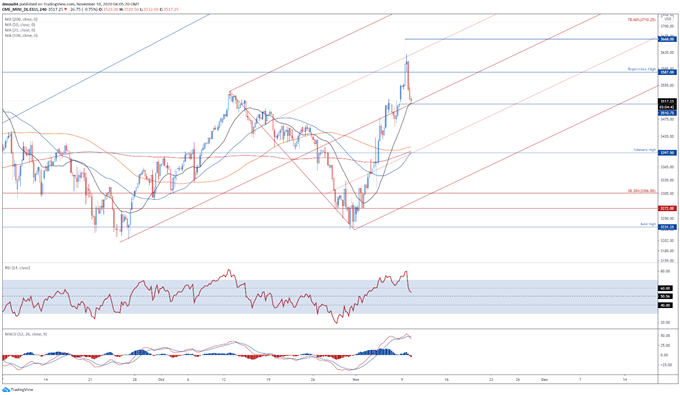 Zooming into a four-hour chart however, suggests that the S&P 500 could rebound higher if price is able to hold above confluent support at the Schiff Pitchfork median and November 6 breakaway gap (3511).

With the downward slope of the RSI notably plateauing, and the 50-MA (3398) and 200-MA (3401) forming a bullish ‘golden cross’ formation, the path of least resistance seems skewed to the topside.

To that end, a retest of the yearly high (3668) may be in the offing if buyers can hurdle resistance at the September high (3587) and would probably bring the 78.6% Fibonacci expansion (3710) into play.

On the other hand, a breach of psychological support at 3500 could generate a pullback towards the November 6 low (3457). 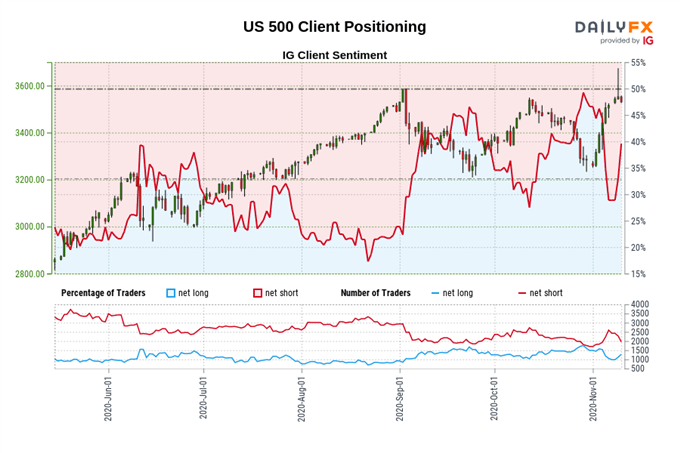 Positioning is less net-short than yesterday but more net-short from last week. The combination of current sentiment and recent changes gives us a further mixed US 500 trading bias.