The haven-associated US Dollar and Japanese Yen gained ground against their major counterparts, while the cyclically-sensitive AUD, CAD and NOK fell.

Gold dipped back below $1,900/oz and silver plunged 1.7% despite yields on US 10-year Treasuries dropping 9 basis points.

Looking ahead, composite PMI figures out of Europe alongside US trade balance data headline the economic docket as the battle for the US presidency continues to take centre-stage. 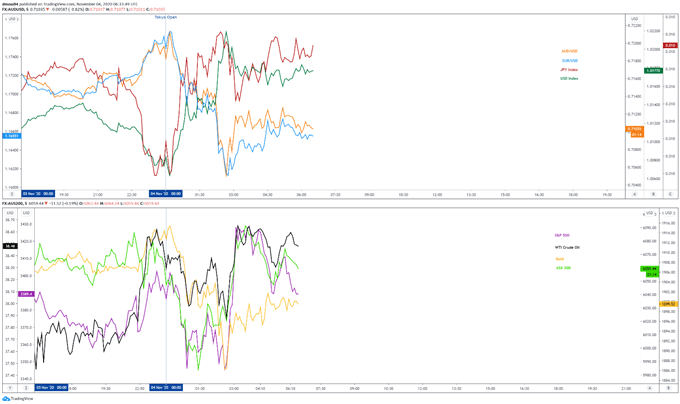 Covid-19 Restrictions, Tightening US Presidential Election to Weigh on Sentiment

As noted in previous reports, a wave of national lockdowns across Europe is threatening to upend the trading bloc’s nascent economic recovery and in turn have resulted in a marked discounting of regional risk assets. This downturn could be set to intensify in the coming days, as the race for the US presidency narrows considerably.

Donald Trump appears to be in pole position in several key battle ground states, with the incumbent President taking out Florida, South Carolina, Iowa and Ohio. In fact, Trump also looks poised to win in Michigan, Pennsylvania and Wisconsin which could concern European investors, as the prospect of the President retaining the White House becomes more likely.

The Trump administration’s policies have fractured relations with Europe by imposing tariffs on aluminium and steel products, and threatening to unleash additional import duties. Therefore, the reality of another Trump term may severely undermine European benchmark equities, as fears of additional trade-based actions directs capital towards ‘safe havens’ and away from risk-associated assets. 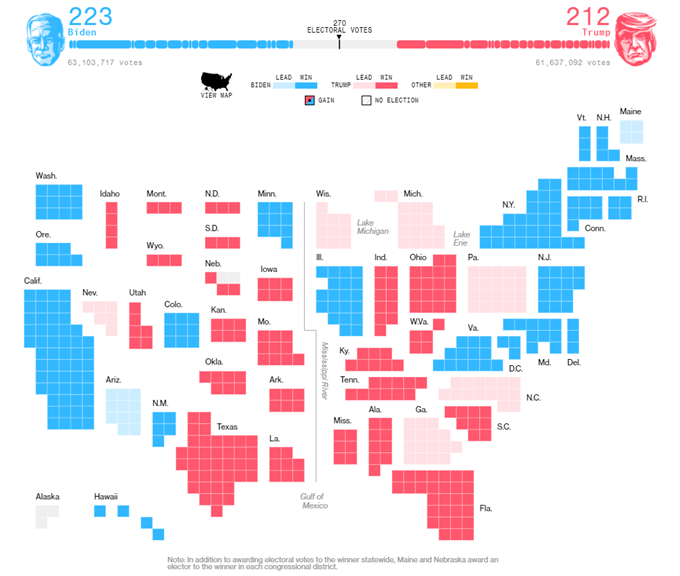 However, with a large volume of mail-in and absentee ballots yet to be counted in Wisconsin, Michigan, Pennsylvania and Georgia, there is still a possibility that Democratic nominee Joe Biden could be announced the winner.

Indeed, the New York Times ‘Election Needles’ suggest that Mr Biden may yet claim a win in Georgia, with current probabilities implying the former Vice President has a 57% chance of taking the state. A win in Georgia would swing the pendulum significantly towards the Democratic nominee and make the President’s path to re-election incredibly difficult.

Nevertheless, with a record turnout likely prolonging the vote-counting process, a period of risk aversion looks likely in the coming days, with the eventual winner likely dictating the medium-term outlook for European benchmark equity indices. 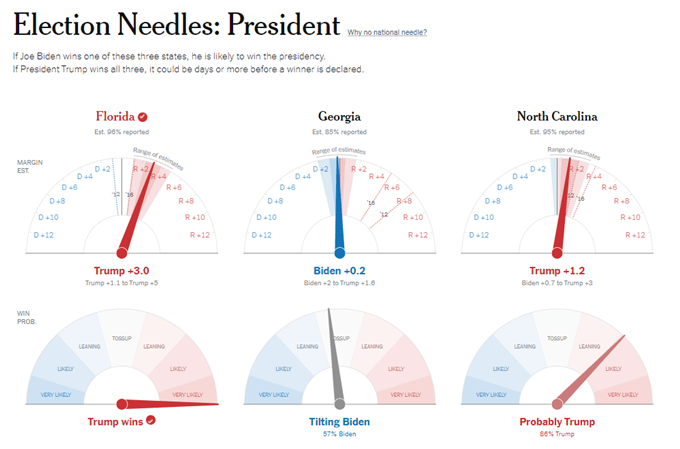 From a technical perspective, the EU Stoxx 50 index could be poised to extend its fall from the October high (3301), as price struggle to clamber back above key resistance at the July low (3139).

With the RSI and MACD indicator tracking below their respective neutral midpoints, the path of least resistance looks to be lower.

Conversely, a daily close above the trend-defining 50-day moving average (3210) could inspire a more extensive rebound and bring the 61.8% Fibonacci (3243) into focus.