The haven-associated US Dollar and Japanese Yen stormed higher during Asia-Pacific trade as hopes of a US fiscal aid package this side of the presidential election on November 3 all but evaporated.

The trade-sensitive Australian Dollar plunged lower after comments from Reserve Bank of Australia Governor Phillip Lowe hinted that a 15-basis point cut and an expanded bond purchasing program could be on the table at the central bank’s upcoming meeting.

Looking ahead, US jobless claims figures and a speech from European Central Bank President Christine Lagarde headline the economic docket. 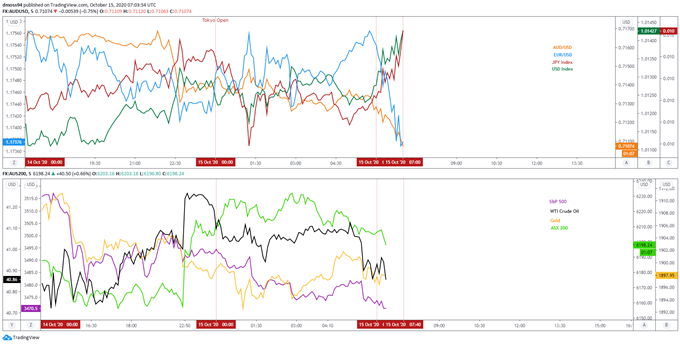 Mnuchin stated although he and House Speaker Nancy Pelosi “continue to make progress on certain issues, we continue to be far apart on others”, adding that “getting something done before the election and executing on that would be difficult”.

This breakdown in negotiations is likely to concern Chairman Jerome Powell and the Federal Reserve given the minutes from the Federal Open Market Committee’s (FOMC) monetary policy meeting in September showed that the central bank believes that the absence of “an additional pandemic-related fiscal package” could see growth “decelerate at a faster-than-expected pace in the fourth quarter”.

Federal Reserve Vice Chair Richard Clarida also stressed the need for “additional support from fiscal policy” given that “it will take some time to return to the levels of economic activity and employment that prevailed at the business cycle peak in February”.

However, it’s yet to be seen if these developments will cause the Fed to adjust its monetary policy settings in the interim, given that the central bank’s balance sheet has notably stabilized in recent months after peaking at over $7 trillion in June.

Therefore, upcoming economic data will likely dictate sentiment if the gridlock in US fiscal negotiations continues, with an unwanted increase in jobless claims potentially intensifying the need for further fiscal support and in turn fuelling the anti-risk US Dollar. 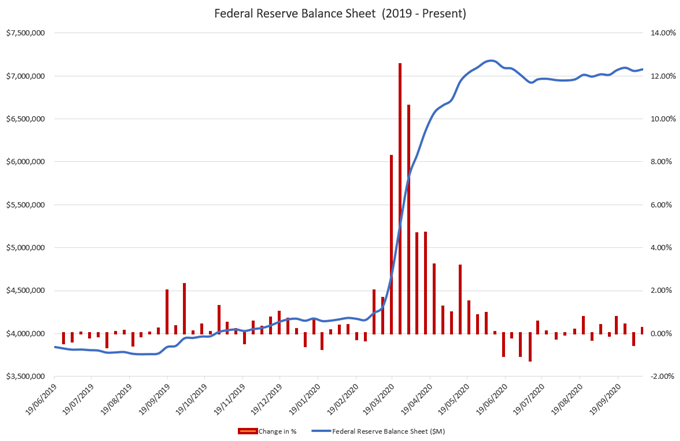 From a technical perspective, the US Dollar Index’s (DXY) outlook remains skewed to the downside, as price continues to track within the confines of a Descending Channel.

That being said, a short-term rebound back towards channel resistance and the September 2018 low (93.81) could be in the offing, if support at the trend-defining 50-day moving average (93.29) holds firm.

Moreover, hidden bullish RSI divergence is indicative of swelling buying pressure and may ultimately trigger an impulsive surge back towards the monthly high (94.03), if price can hurdle resistance at the 21-DMA (93.67).

However, failure to breach the 21-DMA (93.67) would probably signal the resumption of the primary downtrend, with a break back below psychological support at the 93.00 mark needed to carve a path to test the yearly low (91.75).