The commodity-sensitive Australian and New Zealand Dollars outperformed their major counterparts throughout the session while the haven-associated US Dollar and Japanese Yen held relatively steady.

Gold tiptoed back towards the $1900/oz mark after falling over 1.6% yesterday, as yields on US 10-year Treasuries held firm.

Looking ahead, Euro-zone industrial production figures for August headline the economic docket alongside PPI data out of the US for the month of September.

A record increase in coronavirus cases is threatening to upend the Euro-area’s nascent economic recovery, as several European governments move to tighten restrictions after the World Health Organization reported that the continent had registered just under 700,000 new infections in the week ending October 11.

With France’s 7-day rolling average of new infections climbing to its highest levels since the pandemic began and cases in Italy rising by the most since late March, the transition from local restrictions to national lockdowns is becoming increasingly more likely.

In fact, the University of Oxford’s Government Response Stringency Index shows that this transition may be beginning to take place in the Czech Republic, the Netherlands and France, with all three nations enhancing restrictive measures in recent weeks.

What’s more, German Chancellor Angela Merkel is scheduled to meet with the premiers of Germany’s 16 states later today to decide on the appropriate path forward amid a ‘second wave’ of infections, with the Chancellor failing to rule out a nation-wide lockdown and instead stressing that “we cannot squander what we’ve achieved in the last few months”. 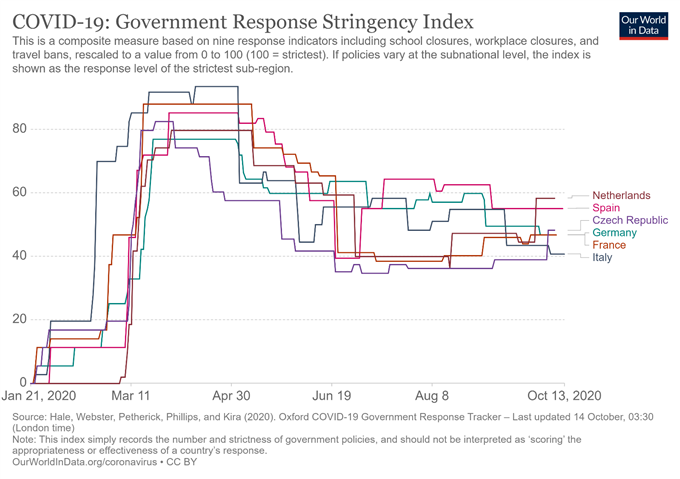 Therefore, it seems rational to expect that other EU member nations will begin to mirror the actions taken by their regional counterparts.

However, with the number of deaths continuing to hover well below the levels seen in March and April, regional governments may hesitate to take actions that will severely hamper economic growth.

That being said, executive director of the World Health Organization’s health emergencies program, Mike Ryan, has warned that this divergence between infections and deaths “could reconnect very, very badly and very catastrophically unless we’re very, very careful”.

To that end, ongoing health outcomes may drive near-term price action, with a marked rise in deaths probably precipitating tighter lockdown measures and in turn hampering the performance of regional risk assets. 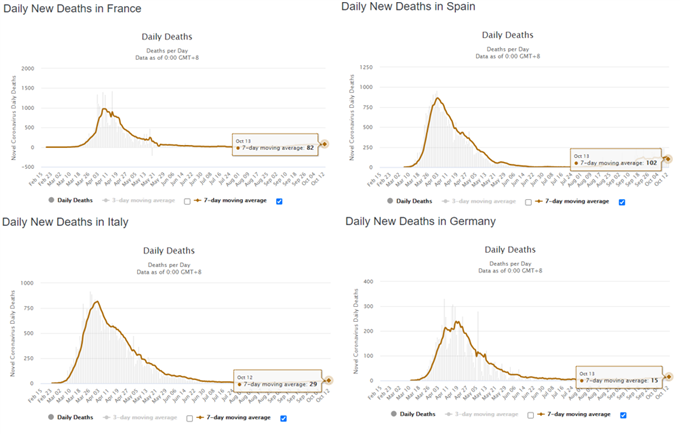 From a technical perspective, the European benchmark EU Stoxx 50 index’s rebound from the September low (3086) appears to be running out of steam, as the RSI struggles to clamber above 60 and price fails to breach key psychological resistance at the 3300 mark.

Although buyers have successfully pushed price back above the 61.8% Fibonacci (3243) and sentiment-defining 200-day moving average (3226), the notable drop-off in volume suggests that reversal lower is in the making.

In fact, the index’s two-week rally may validate the downside break of the Ascending Triangle pattern carved out in the three months to September, if the 3300 level continues to cap buying pressure.

Therefore, a break back below the 61.8% Fibonacci (3243) is needed to validate the downside break of Ascending Triangle consolidation and carve a path to test the September low (3086), with the implied measured move suggesting that price could fall as much as 11% from current levels.

Conversely, a daily close above the September 16 swing-high (3349) would probably invalidate bearish potential and open the door for price to retest the post-crisis high set in July (3445).