The haven-associated US Dollar and Japanese Yen moved marginally higher during Asia-Pacific trade, as investors digested the continued lack of progress in US Congressional stimulus negotiations.

Chinese equity markets stormed higher, led by the Shanghai Composite Index, which surged over 2% as regional investors look ahead to Xi Jinping’s scheduled visit to Shenzhen on Wednesday, with the expectation that the President will unveil plans to encourage foreign investment.

The USD/CNH exchange rate rebounded higher, after falling to its lowest levels since April 2019 at the end of last week, as the People’s Bank of China cut foreign exchange forward reserve requirements from 20% to zero. 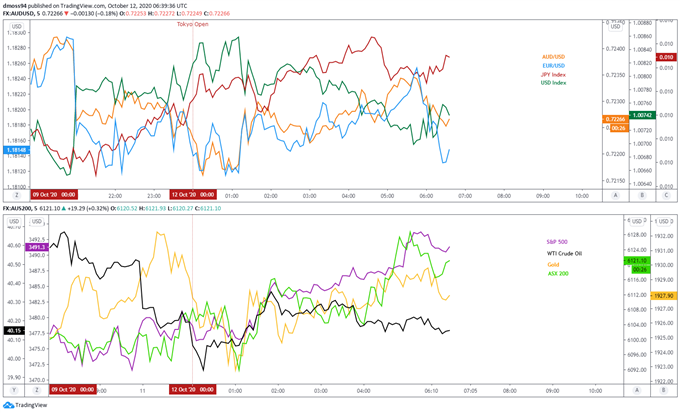 The minutes from the ECB monetary policy meeting in September appeared to confirm that these concerns were not Lane’s alone, as “members noted that longer-term inflation expectations had fallen to 1.6%, the lowest level since the start of Economic and Monetary Union [and] inflation pressures were expected to remain subdued on account of weak demand, lower wage pressures and the recent appreciation of the euro exchange rate”.

With that in mind, several members of the Governing Council made the case “for keeping a “free hand” in view of the elevated uncertainty, underpinning the need to carefully assess all incoming information, including the euro exchange rate, and to maintain flexibility in taking appropriate policy action if and when needed”.

Therefore, with Euro-area headline inflation expected to sink to -0.3% and the core inflation rate to drop to a record low of 0.2% in September, the need for more accommodative monetary policy settings may intensify in the near-term.

However, the suggestion by some committee members that “the flexibility of the pandemic emergency purchase programme suggested that the net purchase envelope should be considered a ceiling rather than a target”, indicates that perhaps not all policymakers are as concerned with the current state of affairs.

In fact, Bundesbank President Jens Weidmann vehemently opposes the provision of additional stimulus given the region’s economy is bouncing back “somewhat more quickly than expected”.

Nevertheless,with Italy recording its largest daily increase in Covid-19 cases since late March and a marked rise in infections forcing the reimposition of growth-hampering restrictions in several Spanish regions, further weakness in upcoming economic data could force the ECB to act sooner rather than later and in turn weigh on the performance of the Euro against its counterparts.

From a technical perspective, the outlook for EUR/USD rates seems skewed to the topside as price jumps back above the 21-day moving average (1.1765) and breaches key psychological resistance at the 1.18 mark.

The RSI’s constructive positioning above its neutral midpoint, in tandem with a bullish crossover on the MACD indicator, hints at swelling buying pressure and could ultimately ignite an extension of the rebound from the September low (1.1612), if price closes above the October 9 high (1.1822).

However, with price struggling to overcome former support-turned-resistance at the Head and Shoulders’ neckline, a reversal back towards the trend-defining 50-DMA (1.1728) is hardly out of the question.

EUR/JPY rates could be at risk of reversing lower in the coming days, as the neckline of the Head and Shoulders pattern carved out in August continues to stifle buying pressure.

Moreover, the RSI’s notable swerve away from bullish territory above 60 could be indicative of fading bullish momentum and may inspire would-be sellers, if resistance at the 125.00 mark remains intact.

A daily close below the June high (124.43) would probably ignite a more extensive correction back to the uptrend extending from the May low, with a break of trend support needed to carve a path to test the sentiment-defining 200-DMA (122.10).

Conversely, a daily close above 125.00 would probably invalidate bearish potential and bring the yearly high set on September 1 (127.07) back into focus.