The haven-associated US Dollar and Japanese Yen continued to lose ground against their major counterparts while the risk-sensitive Australian Dollar pushed back towards its monthly high.

Gold stormed back above the $1,910/oz mark and silver surged over 1.8% as US 10-year Treasury yields slipped lower.

Looking ahead, Canadian employment figures for the month of September headline a rather light economic docket.

BoC Puts Negative Rates Back on the Table

The Canadian Dollar could continue to outperform its major counterparts in the near-term, despite Bank of Canada Governor Tiff Macklem’s suggestions that a negative interest rate policy remains a viable option for the central bank.

Macklem stated that “we are not actively discussing negative interest rates at this point but it’s in our toolkit and never say never”, perhaps attempting to gain some flexibility and assure markets that further easing could be on the table if the nation’s economic recovery markedly slows.

However, the Governor also voiced that “as much as a bold policy response was needed, it will inevitably make the economy and financial system more vulnerable to economic shocks down the road”, adding that “the bottom line is that the private and public sectors together need to be acutely aware of financial system risks and vulnerabilities as the economy recovers”. 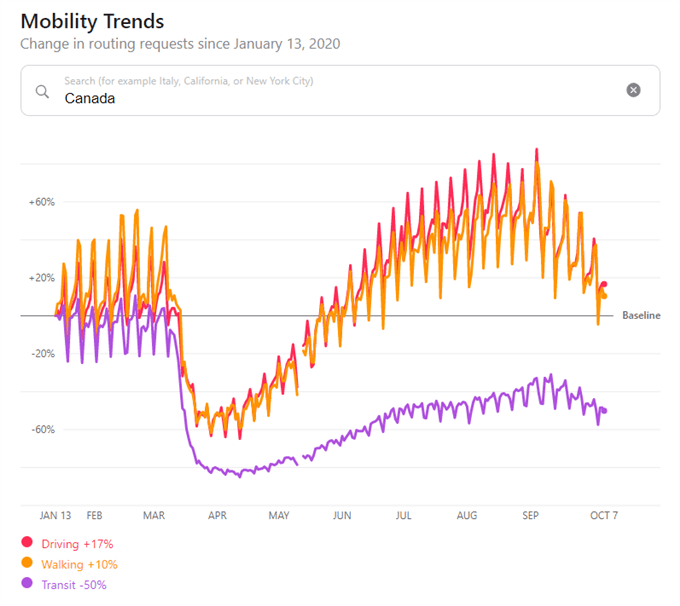 That being said, disappointing employment figures for the month of September may pressure the BoC to rethink its current wait-and-see approach to monetary policy, given high-frequency data reflects a notable slowdown in all three mobility metrics – walking, driving and transit – and a ‘second wave’ of Covid-19 infections is threatening to upend the nation’s economic recovery.

Canada’s chief public health officer Theresa Tam stressed that the substantial increase “in the number of hospitalized cases [is] raising concerns of straining health system capacity if the upward trend continues”, as the nation recorded its highest number of new coronavirus infections since the pandemic began, on October 8.

Nevertheless, the Canadian Dollar looks poised to gain ground against the haven-associated Japanese Yen and US Dollar in the interim, if upcoming economic data encourages the Bank of Canada to keep its monetary policy levers steady. 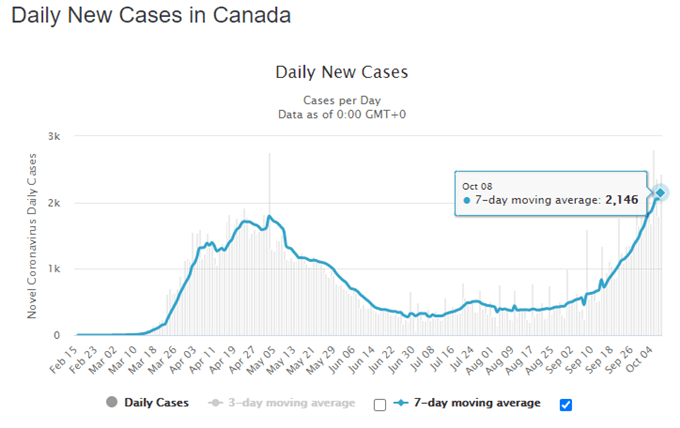 CAD/JPY rates look poised to extend their rebound from key support at the 78.6% Fibonacci (78.47), as price surges back above the July high (80.14) and continues to carve out a bullish Ascending Triangle continuation pattern.

The development of the RSI however, is indicative of fading bullish momentum as the oscillator continues to respect the downtrend extending from the June extremes and fails to clamber back above 60.

This could suggest that price may slide back towards the sentiment-defining 200-day moving average (79.72) before resuming its push higher, if support at the July high (80.14) gives way.

However, a push to test the August high (81.58) could be in the offing if price remains constructively perched above the psychologically pivotal 80.00 mark, with a daily close above the June high (81.91) needed to validate the topside break of the Ascending Triangle and potentially ignite a surge to test the pre-crisis high (84.75). 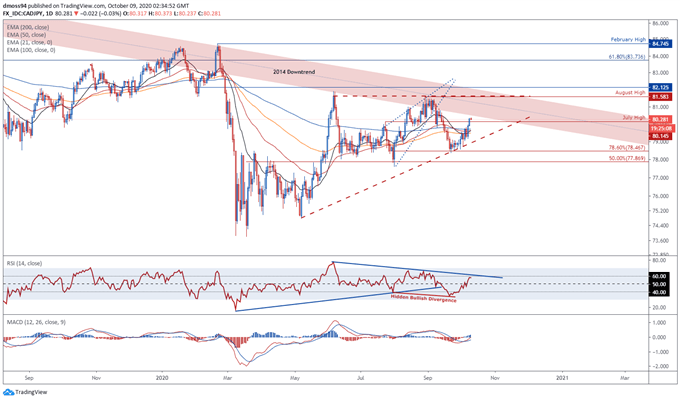 The outlook for USD/CAD rates remains skewed to the downside, as price continues to track within the confines of a Descending Channel and below all four moving averages.

Moreover, a bearish crossover on the MACD indicator and the RSI’s plunge back below its neutral midpoint hints at building selling pressure, which may ultimately intensify the retreat from the September high (1.3421) if USD/CAD is unable to clamber back above the 1.3200 level.

On the other hand, a rebound towards confluent resistance at the June low (1.3316) could be on the cards if sellers fail to overcome support at the 1.3100 mark. 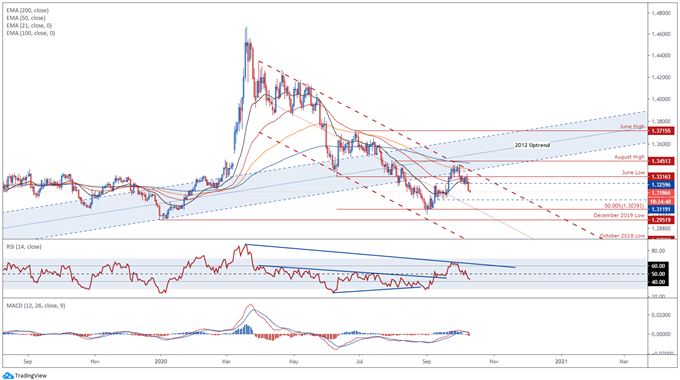