Australia’s ASX 200 index climbed just under 1% and S&P 500 futures stormed towards the 3,400 level while the haven-associated US Dollar and Japanese Yen lost ground against their major counterparts.

Gold flirted with the $1,900/oz mark and silver jumped over 2%, despite US 10-year Treasury yields pushing back towards 0.7%.

Looking ahead, a slew of manufacturing PMI figures out of Europe may prove market-moving ahead of US initial jobless claims data for the week ending September 26. 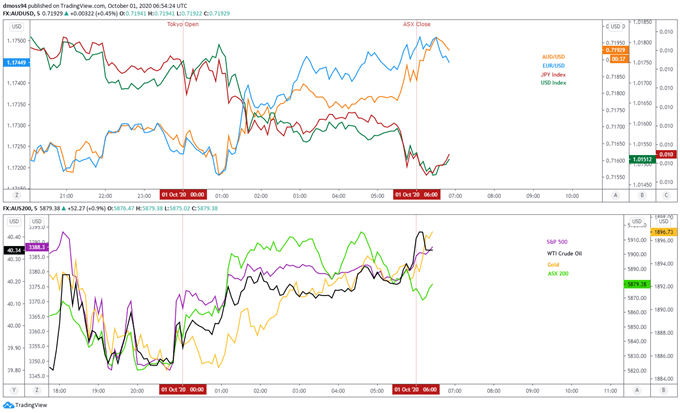 Upcoming inflation data out of Europe may put further pressure on the European Central Bank to do more to support the trading bloc’s nascent economic recovery, as consumer prices declined on a yearly basis for the first time since May 2016 and the annual core inflation rate fell to a record low of 0.4% in August.

In fact, it seems as though the ECB may mirror the Federal Reserve’s recent adjustment to its mandated 2% target and adopt a flexible form of average inflation targeting (AIT), as President Christine Lagarde stated that “the wider discussion today is whether central banks should commit to explicitly make up for inflation misses when they have spent quite some time below their inflation goals” at a scheduled speech on September 30.

Therefore, with the annual inflation rate in the Euro-zone averaging a paltry 1.2% over the last 12 years and a ‘second wave’ of Covid-19 infections threatening to force the reimposition of economically-devastating restrictions, an expansion of the €1.35 Pandemic Emergency Purchase Program (PEPP) could be on the table by the end of the year.

However, the suggestion by some committee members that “the flexibility of the pandemic emergency purchase programme suggested that the net purchase envelope should be considering a ceiling rather than a target”, indicates that the central bank may not hold a unanimous view on the way forward for its monetary policy response.

Nevertheless, disappointing economic data and deteriorating health outcomes could force the hand of the ECB, with the provision of additional monetary stimulus probably weighing on the Euro in the near-term.

As noted in previous reports, EUR/JPY rates have pulled back significantly since breaking below Rising Wedge support and the August 6 swing-high (125.59), with price falling over 3.5% since setting the post-crisis high on September 1 (127.07).

However, with price perched constructively above the 100-day moving average (122.97) and the RSI attempting to break back above its neutral midpoint, a retest of the yearly high (126.85) is hardly out of the question.

Moreover, a bullish crossover on the MACD indicator may encourage would-be buyers and ultimately signal the resumption of the primary uptrend, if EUR/JPY can successfully hurdle confluent resistance at the June high (124.43) and downtrend extending from the 2020 high (126.85).

Conversely, a daily close back below the 124.00 level could induce a more sustained pullback and bring support at the September low (122.38) into focus.