The trade-sensitive Australian Dollar clawed back lost ground during Asia-Pacific trade after Westpac retracted its call for a cut to the Official Cash Rate (OCR) in October by the Reserve Bank of Australia (RBA).

The haven-associated US Dollar dipped lower against its major counterparts while the Japanese Yen nudged marginally higher.

Gold drifter lower and silver fell as much as 1.6% despite US 10-year Treasury yields holding steady at 0.66%.

House Speaker Nancy Pelosi’s recent comments suggesting that a much-needed fiscal stimulus package could still be delivered before the US Presidential Election in November may buoy risk-sensitive assets and in turn weigh on the performance of the Greenback against its major counterparts in the near-term.

Pelosi stated that Democrats will put forward a new proposal in the coming days and that she trusts “Secretary Mnuchin to represent something that can reach a solution, and I believe we come to an agreement”, adding that “what we will be putting forth is a proffer to say, now let us negotiation within a time frame and a dollar amount to get the job done”.

Despite Pelosi’s optimism however, it remains to be seen if US policymakers can see eye-to-eye given Democrats are calling for at least $2.2 trillion in new aid and President Donald Trump has suggested that he would only go as high as $1.5 trillion.

Nevertheless, with Pelosi stressing that “I’d rather have a deal that puts money in people’s pockets than to have a rhetorical argument”, there is a distinct possibility that some form of fiscal aid could be delivered before the November 3 election.

With that in mind, Congressional stimulus negotiations may dictate the haven-associated US Dollar’s short-term outlook, with any form of progress probably underpinning risk-associated assets.

Moreover, Director of the National Institute of Allergy and Infectious Diseases (NIAID) Anthony Fauci’s “cautiously optimistic” outlook on the potential delivery of a coronavirus vaccination by “November or December” could soothe market participants concerns and diminish haven inflows.

Fauci stated that by the end of the year he expects that scientists will have discovered at least one effective vaccine and that the United States could have enough doses for everyone “by the time you get to maybe the third or fourth month of 2021”.

In fact, the NIAID Director believes that although there is no guarantee that an effective vaccine will be discovered, he believes that if one is successfully developed “the US can start thinking about getting back to some form of normality” towards the second half of 2021.

This welcome development in the war against the novel coronavirus may buoy investor’s sentiment and potentially end the USD/JPY exchange rate’s tentative recovery from fresh multi-month lows. 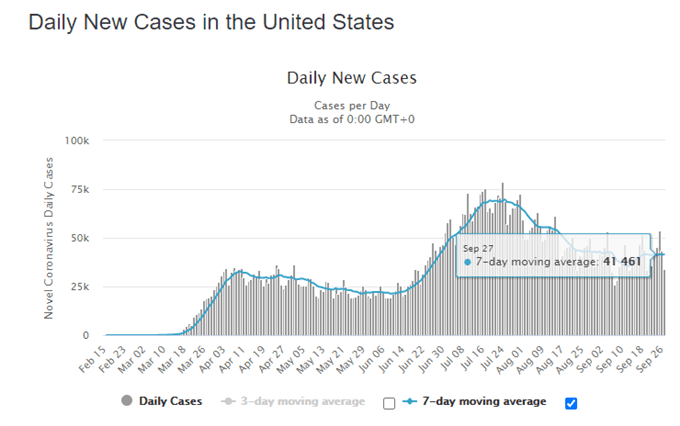 As mentioned in previous reports, USD/JPY rates look poised to extend their trek lower after failing to climb back above confluent resistance at the trend-defining 50-day moving average (106.23) and Schiff Pitchfork parallel.

Although price has recovered significantly since collapsing 2.4% from the monthly high (106.55), the recent topside push appears to have validated the downside break of the uptrend extending from the March low (101.18) and suggests further losses may be afoot.

Moreover, with the RSI continuing to respect the downtrend extending from the June highs and price tracking below the 21-, 50-, 100- and 200-DMAs, the path of least resistance seems to be lower.