The risk-sensitive Australian Dollar crept marginally higher during Asia-Pacific trade, as the haven-associated Japanese Yen and US Dollar drifted lower against their major counterparts.

Looking ahead, Canadian retail sales for July and the preliminary US consumer sentiment release for September headline the economic docket. 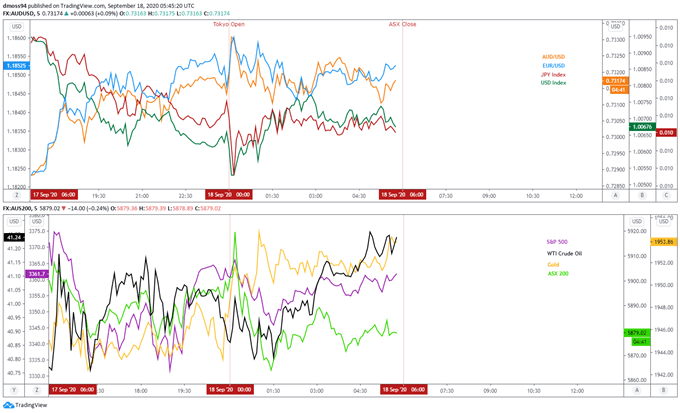 Upcoming Canadian retail sales figures for July may exacerbate the USD/CAD exchange rate’s fall from the monthly high, with a better-than-expected release reinforcing the Bank of Canada’s (BoC) view that “the Canadian economy has bounced back even more strongly in the reopening phase than we were expecting” and potentially justifying the central bank’s decision to maintain the status quo.

The BoC opted to maintain “its target for the overnight rate at the effective lower bound of 0.25%” and pledged to continue its quantitative easing (QE) program “with large-scale asset purchases of at least $5 billion per week of Government of Canada bonds” at its September meeting.

Having said that, with the annual inflation rate for August coming in at 0.1% it would seem rational that the provision of additional stimulus could be on the horizon, given the central bank remains committed to “provide the monetary policy stimulus needed to support the recovery and achieve the inflation objective”.

However, Governor Tiff Macklem’s statement that “many people don’t feel like inflation is falling when food inflation has been averaging almost 3 percent” at the Federal Reserve’s Jackson Hole symposium could indicate that Canadian policymakers are becoming increasingly sensitive to the potential impact of alternative monetary policy measures, and may look to roll back some of the BOC’s existing settings if economic data continues to surprise to the upside.

Moreover, the progressive loosening of Covid-19 restrictions – reflected by the University of Oxford’s Government Stringency Index – is likely to foster economic growth and could see the local economy continue to outperform its southern neighbour in the short-term, if Canada is able to successfully suppress a fresh ‘second wave’ of coronavirus infections.

Average daily cases now sit at more than double the levels seen in July and have prompted Chief Public Health Officer Theresa Tam to warn that “with continued circulation of the virus, the situation could change quickly, and we could lose the ability to keep Covid-19 cases at manageable levels”.

Nevertheless, despite a significant increase in infectionsthe mortality rate continues to hover in single-digits, which could suggest that the tightening of lockdown measures is relatively unlikely.

To that end, a push to fresh monthly lows looks on the cards for USD/CAD rates if upcoming economic data encourages Canadian policymakers to retain their wait-and-see approach to monetary policy. 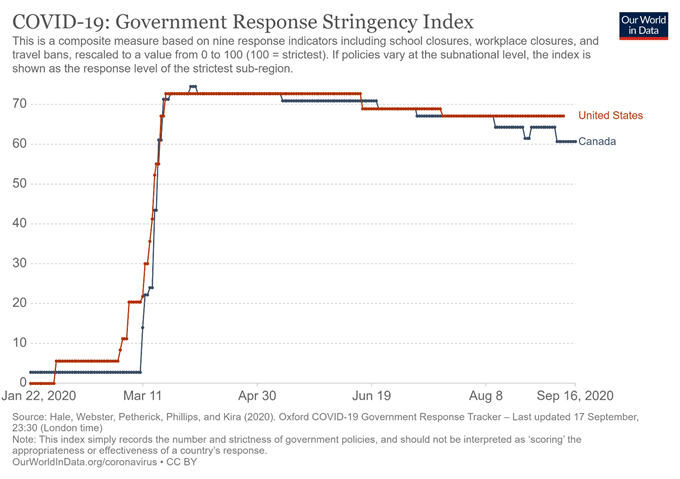 From a technical perspective, the path of least resistance for USD/CAD appears to be lower, as price failed to break back above the trend-defining 50-day moving average (1.3280) and September high (1.3259).

That being said, the exchange rate looks to have carved out a bullish Falling Wedge reversal pattern over the last 6 months, which suggests a topside break may be in the offing.

However, with the RSI and MACD indicators both tracking below their respective neutral midpoints and the downward slope of the sentiment-gauging 200-DMA (1.3450) notably intensifying, a push back towards the monthly low (1.2994) seems the likelier scenario.

Conversely, price may retest the monthly high (1.3259) if support at the September 10 swing-low successfully suppresses selling pressure (1.3119), with a daily close above the June low (1.3316) needed to validate the Falling Wedge pattern and possibly signal a key reversal in USD/CAD rates. 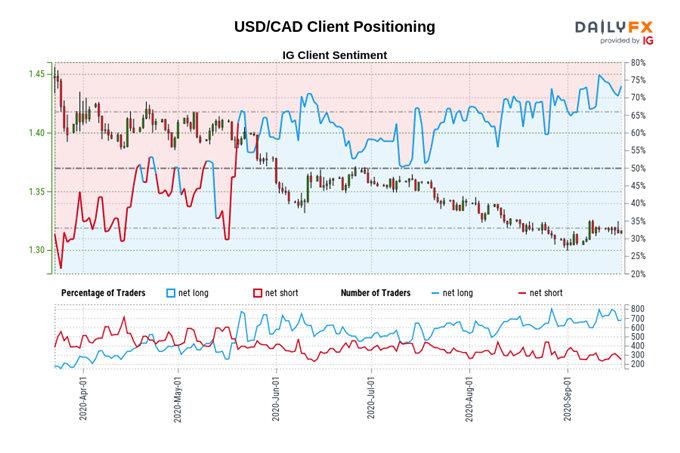