The haven-associated US Dollar and Japanese Yen nudged marginally lower during Asia-Pacific trade as the Bank of Japan confirmed they will continue to “take additional easing measures if necessary”.

Global equity markets moved higher, led by the Australian ASX 200 index which soared as much as 1.22% early in the session before closing just shy of 6000.

Simmering US-China Tensions May Weigh on US equities

In the absence of meaningful economic data, recent comments from President Donald Trump stating that “we’re going to end our reliance on China” may weigh on US benchmark equity indices ahead of the Federal Reserve’s monetary policy meeting on September 16.

Of course, one could argue that escalating anti-China rhetoric is to be expected in the run-up to US general elections in November and given the frequency of Trump’s attacks on Beijing, the market may have become somewhat desensitized to trade-related headlines.

Moreover, the President currently lags his Democratic challenger by 8% in the national polls, with 50.4% of Americans preferring Joe Biden over a second Trump term. Therefore, it seems relatively logical to discount the recent escalation in US-China tensions.

However, with the President noticeably narrowing the gap in recent weeks, the proposed “decoupling” of the world’s two largest economies may become a somehwat likelier scenario and in turn significantly hamper the performance of risk assets.

To that end, trade-related headlines may begin to dictate the near-term outlook for benchmark equity indices, with a marked escalation in tit-for-tat exchanges possibly fuelling a period of significant risk aversion and limiting the potential upside for the tech-heavy Nasdaq 100 index and Dow Jones Industrial Average. 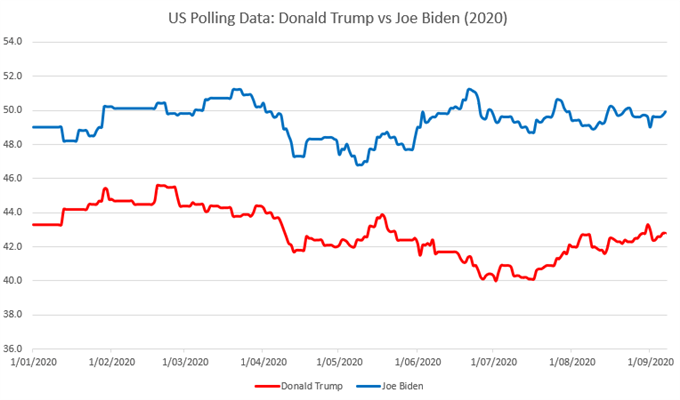 The Nasdaq 100 index’s three-day retreat from its record high (12466.6) appears to be nothing more than a short-term pullback, as price bounces away from confluent support at the August 7 swing-high (11291.8) and 5-month uptrend.

Although the RSI plunged through its uptrend extending from the March extremes it remains constructively positioned above its neutral midpoint, which suggests that bearish momentum may be fading.

Furthermore, a bullish Hammer candle just above key support is indicative of swelling positive momentum and could encourage would-be buyers if price clambers back above the 21-day moving average (11650.5).

Conversely, a daily close below the August 7 swing-high (11291.8) could invalidate bullish potential and ignite a correction back towards the June high (10310). 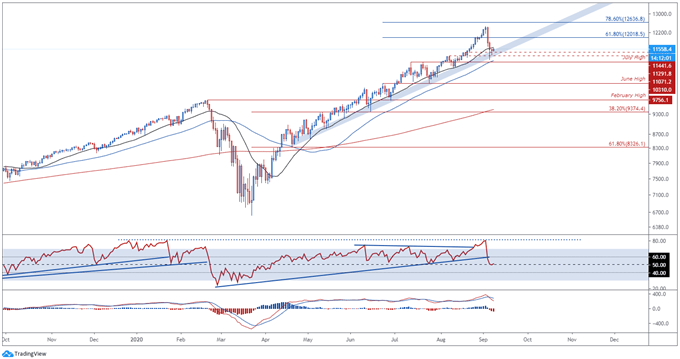 In a similar fashion to its tech-heavy counterpart, the Dow Jones Industrial Average’s sharp two-day retreat from its post-crisis high also appears to be nothing more than a short-term pullback, as confluent support at the January low (28130.2) and Schiff Pitchfork parallel suppress selling pressure.

With price tracking within an ascending Schiff Pitchfork and both the RSI and MACD indicators travelling in bullish territory, a push back towards the monthly high (29193.6) looks on the cards if support at the 21-day moving average continues to guide price higher.

A daily close above the psychologically pivotal 29000 level would probably carve a path back to test the record high set in early February (29595).

On the other hand, a break back below the 21-DMA could inspire a more sustained pullback and bring the trend-defining 50-MA into play (27250). 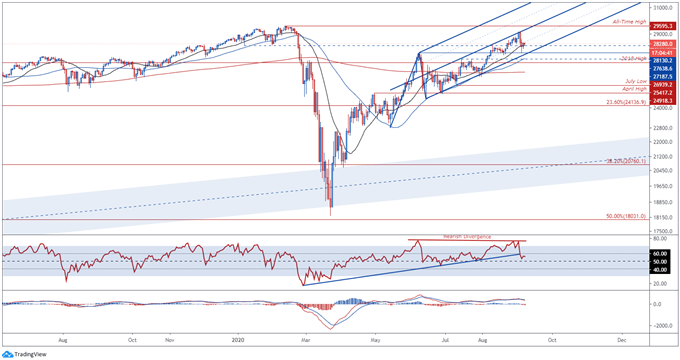