The haven-associated Japanese Yen and US Dollar clawed back lost ground against their major counterparts, as sentiment appeared to sour towards the tail-end of the Asia-Pacific trading session.

Gold slid back below $1,920 as the yield on the US 10-year Treasury Note climbed back above 70 basis points.

Looking ahead, US durable goods orders for July headline the economic docket ahead of EIA crude oil inventories for the week ending August 21.

The market’s fear gauge – the CBOE Volatility Index or VIX – has steadily drifted lower since peaking on March 18, as central banks around the world injected an unprecedented amount of liquidity into the financial system in response to the novel coronavirus pandemic.

The Office of the US Trade Representative (USTR) stated that US and Chinese negotiators participated in a “regularly scheduled call” to review the phase-one trade deal on August 24, with “both sides seeing progress and committed to taking the steps necessary to ensure the success of the agreement”.

Although this easing in tensions was followed up by robust economic data - US manufacturing PMI for August showed the fastest increase in factory activity since January 2019 - it failed to drive the volatility index back to pre-crisis lows.

In fact, the index has nudged marginally higher since failing to fill in the February breakaway gap, which suggests that a resurgence of volatility could be in the offing.

Therefore, investors should remain wary as the month of August draws to a close, with the VIX more than likely to rise at the expense of US asset prices if the upcoming Jackson Hole symposium triggers a risk-averse response. 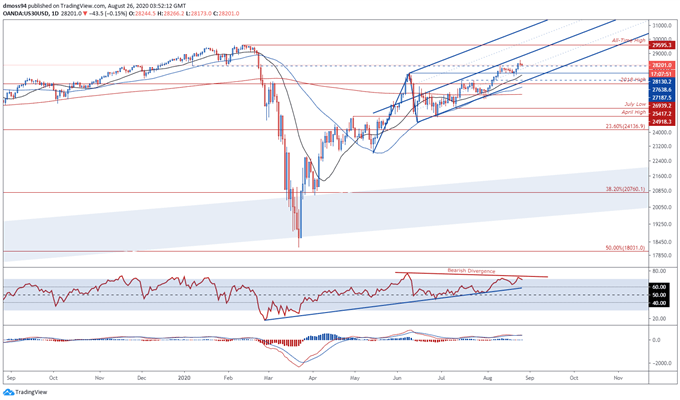 Bearish RSI divergence and a Shooting Star reversal candle above the January low (28130) paint an ominous picture for the Dow Jones Industrial Average and may inspire a near-term correction lower, if price breaks back below psychological support at the 28,000 level.

However, the steeping gradients of the 21-, 50- and 200-day moving averages are indicative of swelling bullish momentum and could result in any potential pullback being met with a wave of bargain-hunters attempting to “buy the dip”.

Nevertheless, price appears poised to slide back towards confluent support at the Pitchfork parallel and June high (27638.6), before potentially resuming its primary uptrend and pushing back towards the record high set in February (29595.3).

Conversely a daily close below the psychologically pivotal 27500 level would likely invalidate bullish potential and carve a path for price to fall back to support at the July high (27187.5).