Asian equity markets rose during Asia-Pacific trade on the back of easing US-China tensions, as the Trump administration moved to reassure US firms that they can still do business on the Chinese mainland with the popular messaging app WeChat – owned by Tencent.

S&P 500 futures rose alongside the Australian ASX 200 and Japanese Nikkei 225 index whilst the haven-associated US Dollar and Japanese Yen slid against their major counterparts.

Gold drifted lower as US 10-year Treasury yields dipped back below 63 basis points.

Looking ahead, a relatively light economic docket may see investors begin to turn their focus to the upcoming Federal Reserve Economic Policy Symposium in Jackson Hole on August 27. 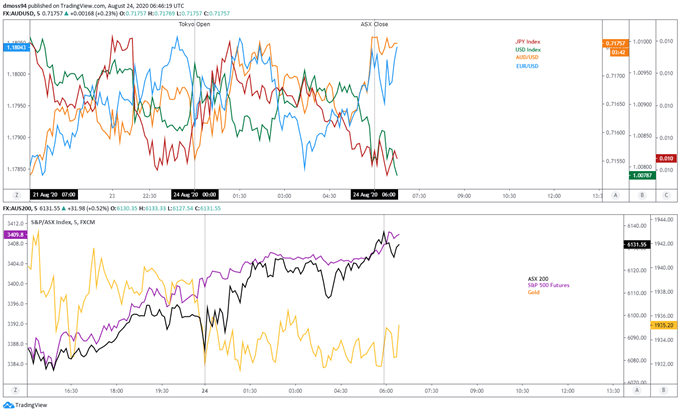 The largest daily increase of Covid-19 cases in over 4-months is threatening to halt Germany’s nascent economic recovery, as the number of infections rose by 2034 on August 22, bringing the national total to 232,082. The number of fatalities increased by seven to bring the death toll to 9,267.

This recent surge may force Angela Merkel to reintroduce tighter restrictions, after the German Chancellor stated that “this is a trend that cannot continue and must be halted [as] at this point, there can be no further loosening of restrictions”.

Considering Europe’s largest economy weathered the initial phase of the virus better than a vast majority of its EU counterparts, a ‘second wave’ of coronavirus infections may take some of the shine off the German recovery and hamper the performance of regional risk assets in the near-term. 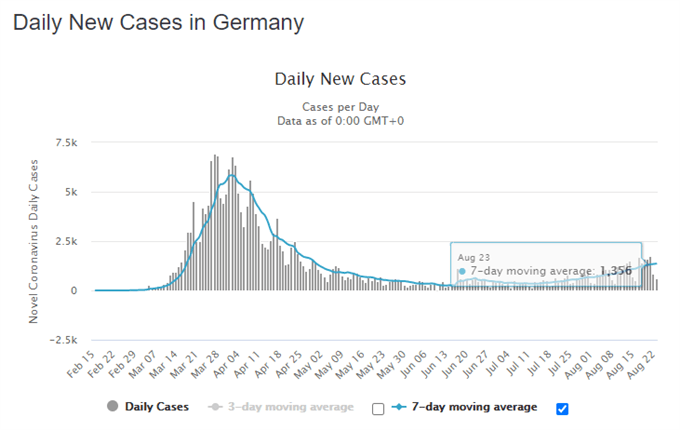 In fact, the impact of the recent climb in case numbers is immediately reflected in local mobility data, with all three metrics – walking, driving and transit – noticeably retreating from their respective post-crisis highs set earlier this month. These declines would likely intensify in the wake of tighter restrictions.

With that in mind, Germany’s upcoming second quarter GDP release may not be as influential on the near-term outlook for the benchmark DAX 30 index even if it exceeds expectations, given the deteriorating local health situation and the lagging nature of the economic indicator. 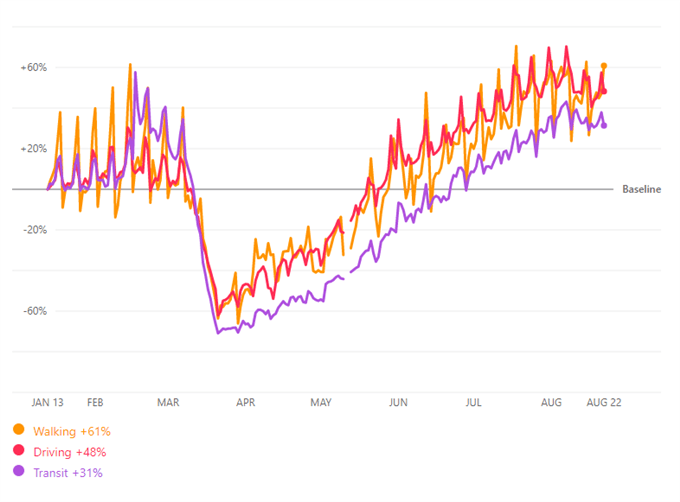 Counterbalancing the headwinds facing regional risk assets is the significant increase in long-dated security offerings by the German Treasury, set to double its weekly bond offering from last week to €9.5 billion.

This substantial increase in debt issuance may hamper the performance of ‘safe haven’ German Bunds and in turn direct capital flows into regional equity markets, given the negative correlation seen historically.

Of course, correlation does not imply causation. Nevertheless a significant sell-off in bond prices could potentially underpin the German DAX 30 and limit its potential downside despite a weakening fundamental backdrop. 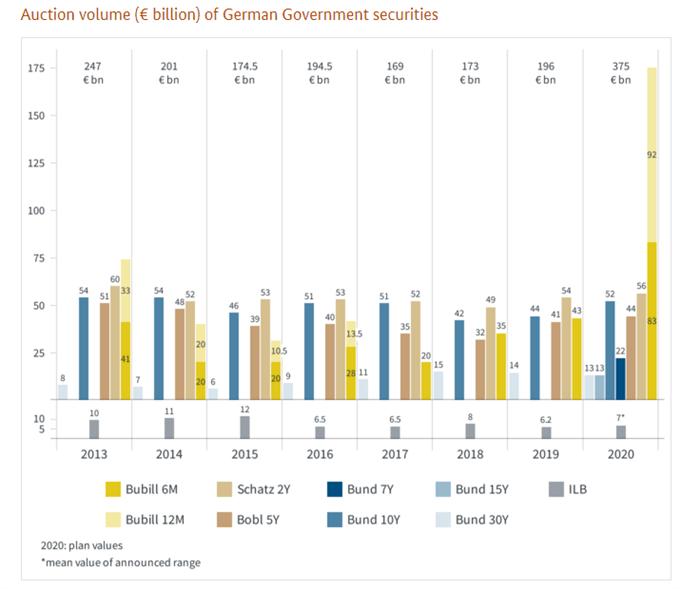 From a technical perspective, the German DAX 30 index continues to track within the confines of an Ascending Channel and remains constructively poised above the midpoint of the 2009 uptrend. This suggests that an extension of the rally from the monthly low could be on the cards.

Furthermore, the RSI appears to be climbing away from its neutral midpoint as the MACD indicator hovers comfortably in positive territory. This may be indicative of swelling bullish momentum.

Mobile support at the 21-day moving average (12750) could direct price towards resistance at the yearly open, with a daily close above the July high (13126) needed to carve a path back to the record high set in February (13829).

Conversely, a daily close below the trend-defining 50-DMA (12645) may encourage would-be sellers and potentially result in price sliding towards channel support, with the 200-DMA (12170) serving as the last line of defence for buyers. 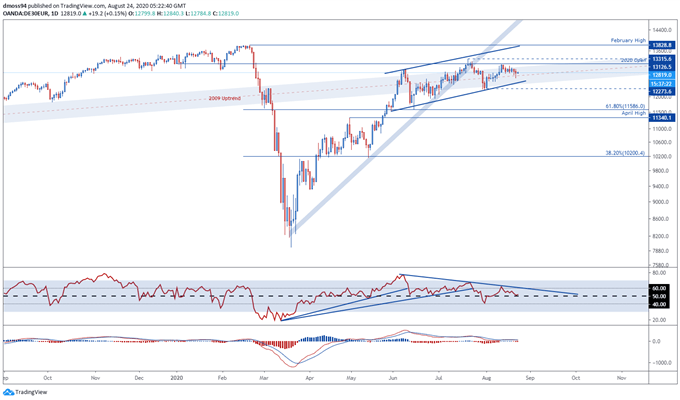