Equity markets broadly marched higher in Asia-Pacific trade as market participants dismissed the announcement of retaliatory sanctions from China on US officials, as Beijing notably failed to target any of President Trump’s aides.

Gold collapsed back below the $2,000/oz mark whilst silver slid over 3.5% as the haven-associated US Dollar held its ground against its major counterparts.

The trade-sensitive Australia Dollar climbed back above the 0.7150 level alongside the ASX 200, as the number of daily Covid-19 cases in Victoria, Australia’s second largest state, dipped below 400 for the third consecutive day.

Looking ahead, Germany’s ZEW economic sentiment index headlines the economic docket alongside PPI data out of the United States.

The US Dollar’s muted response to escalating US-China trade tensions suggests the Greenback may extend its decline from the yearly high set in March (102.99), should Congress deliver another fiscal relief package in response to the novel coronavirus.

With both sides of the aisle remaining “trillions of dollars apart”, according to White House Chief of Staff Mark Meadows, President Donald Trump issued several executive orders to bypass his Democratic counterparts who he believes “are actively blocking the things that we want, and what we want is good for people”.

The President’s actions were labelled as “absurdly unconstitutional” by House Speak Nancy Pelosi and fail to address major issues such as “our assistance to the schools, feeding the hungry [and] helping people who are going to be evicted”.

However, the legality of the proposed measures aside, Trump’s move may bring both sides back to the negotiating table to avoid the implementation of executive actions Senate Minority Leader Chuck Schumer describes as “unworkable, weak and narrow”.

Furthermore, Secretary of State Steven Mnuchin has kept the door open for talks to continue, stating that “anytime they want to meet – and they’re willing to negotiate and have a new proposal – we’re more than happy to meet”.

Suggesting that “there’s a deal to do if the Democrats are reasonable and want to compromise”.

To that end, coronavirus relief package talks may dictate the outlook for the US Dollar. With a breakdown in negotiations potentially underpinning the Greenback against its major counterparts.

Conversely, the successful provision of much-needed fiscal support burgeoning investor appetite and resulting in a marked discounting of the US Dollar. 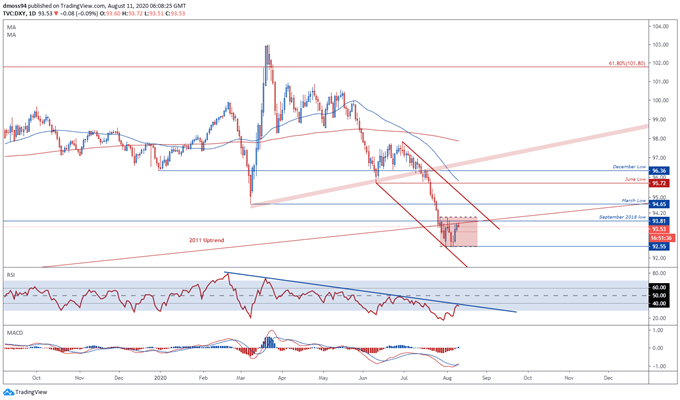 From a technical perspective, the US Dollar appears to be gearing up for a push to fresh yearly lows. Carving out a potential Bear Flag continuation pattern below key resistance at the 2011 uptrend and September 2018 low (93.81).

Although the RSI climbed out of oversold territory, it is struggling to break above the downtrend extending from the February extremes and looks set to slide back below 30 in the coming days.

Furthermore, the intense downside steepening of the trend-defining 50-day moving average (95.82) may inspire further selling, with a break below the yearly low (92.52) needed to validate the bearish continuation pattern.

However, the MACD suggests a linger bullish bias as it crosses over its ‘slower’ signal line counterpart.

Therefore, a retest of the monthly high (93.99) could be in the offing, with a break above invalidating the Bear Flag pattern and probably coinciding with the RSI violating its 6-month downtrend. 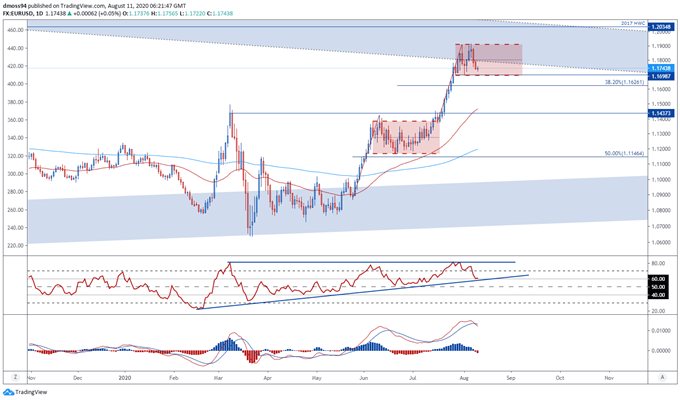 Although the MACD indicator suggests that price may extend its recent two day decline from the monthly high (1.1916), the RSI continues to track its six-month uptrend and remains positioned above 60 in bullish territory.

With that in mind, a pull back to the monthly low (1.1696) may precede the resumption of the primary uptrend.

A daily close above the 1.19 level is needed to validate the bullish continuation pattern and open a path to test the 2017 high weekly close (1.2035).

On the other hand, capitulation through support at the 1.17 level would probably invalidate the Bull Flag and could result in price falling back to the 50-day moving average (1.1468).