US Dollar Poised to Recover Ahead of US Nonfarm Payrolls Report

The executive order comes into effect 45 days from now and follows on from Trump’s threats to shut down TikTok if the company’s owners – ByteDance - fail to facilitate a sale of the highly-addictive application to a US corporation by September 15.

Given WeChat is run by one of China’s most valuable tech companies – Tencent – retaliatory escalation from Beijing is almost a certainty and could lead to period of sustained risk aversion.

The haven-associated US Dollar and Japanese Yen rose against their trade sensitive counterparts after the announcement whilst gold prices retreated from fresh record highs.

Developments should continue to be watched in the upcoming session, with a vitriolic response from China probably fueling haven inflows and anchoring global risk assets.

Looking ahead, the US jobs report for July could prove market-moving, with the unemployment rate expected to decline to 10.5%.

The upcoming US nonfarm payrolls (NFP) report may underpin the Greenback’s tentative recovery against its major counterparts, should the volatility-inducing monthly release exceed expectations of a further 1.58 million jobs added to the local economy in July.

This would build on yesterday’s positive jobless claims data with both continuing and initial claims declining to the lowest levels since the pandemic began.

However, longer-term unemployment measures continue to climb as 2.89 million workers claimed to have permanently lost their jobs in June, jumping by a staggering 588,000 in just 4 weeks.

Unfortunately these numbers look set to rise as the novel coronavirus hampers the return to normalcy in several US states, intensifying the pressure on Congress to deliver additional fiscal stimulus measures to support the nascent economic recovery.

Attempting to build on what Senate Majority Leader Mitch McConnell believes "worked in the CARES Act”. 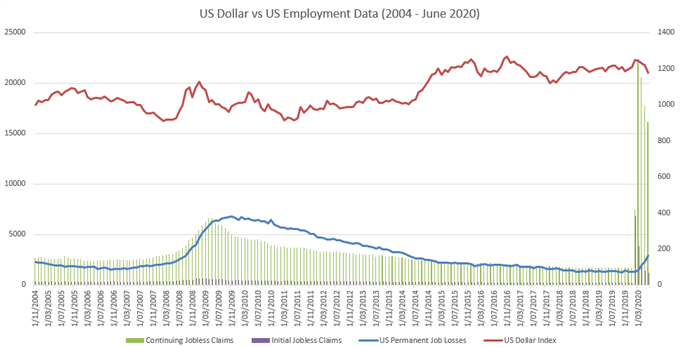 Therefore, it seems rational to expect that positive employment data could buoy the US Dollar, showing that the situation may not be as dire as first thought and keeping the ever-supportive Federal Reserve temporarily at bay.

Nevertheless, with permanent job losses rising significantly and US policymakers “trillions of dollars apart” according to White House Chief of Staff Mark Meadows, a positive NFP report may only serve to ease the intensity of USD selling seen in recent days and allow the under-fire currency to climb out of oversold territory.

Disappointing data is likely to exacerbate the Greenback’s decline as investors position for the provision of further monetary stimulus from a Federal Reserve that remains “committed to using our full range of tools to support the economy in this challenging time”. 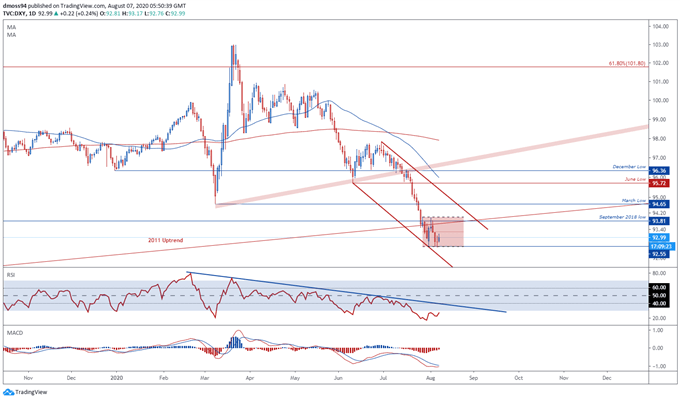 From a technical perspective, the US Dollar may extend its tentative recovery from the yearly low (92.52) as RSI divergence hints at underlying exhaustion in the recent plunge below the 2011 uptrend.

A push back to resistance at the September 2018 low (93.81) looks on the cards, as the RSI attempts to climb out of oversold territory for the first time since July 21 and the MACD eyes a cross back above its ‘slower’ counterpart.

The path of least resistance remains to the downside should price remain capped by the 94.00 mark, with a near-term recovery potentially carving out a Bear Flag continuation pattern at key resistance and probably coinciding with RSI respecting its downtrend extending from the yearly extremes.

Conversely, a daily close above the September 2018 low may invalidate the bearish continuation pattern and hint at a more sustained recovery to test resistance at the March low (94.65).