The US Dollar’s struggles continued during Asia-Pacific trade as the risk-sensitive Australian Dollar pushed above the 0.72 mark for the first time since April 2019.

The Euro climbed a further 0.28% against its liquidity-rich counterpart despite German second quarter GDP estimated to contract 10.1%. Yields on US 10-year Treasuries fell below 0.53% to fresh record lows.

The ASX 200 plunged over 2% as a cluster of Covid-19 cases in New South Wales and Queensland compound ‘second wave’ concerns, whilst Japan’s Nikkei 225 index slid lower as the haven-associated Japanese Yen climbed against its major counterparts.

Looking ahead, preliminary GDP data out of Europe headlines the economic docket alongside US second quarter earnings from Chevron and Caterpillar.

The EU Stoxx 50 index plunged after the release, dropping 3.2% as regional investors look ahead to upcoming Spanish, Italian and Eurozone quarterly GDP estimates.

It’s not unrealistic to expect more disappointing data out of Europe, reflecting the economic devastation caused by the imposition of restrictions and lockdown measures to suppress the outbreak of the coronavirus pandemic.

With that in mind, deeper contractions reported in Spanish, Italian and Euro-area GDP looks to be a likely possibility. Potentially exacerbating the EU Stoxx 50 index’s recent correction and hampering the performance of European risk assets.

Furthermore, the yield spread between Italian government bonds and German bunds has widened since the announcement of the European Union’s €750 trillion coronavirus recovery fund on July 21, suggesting a level of disappointment in the overall makeup of the approved stimulus package.

Statements from Christine Lagarde support this hypothesis as the President of the European Central Bank believes the fund’s composition of €390 billion in grants and €310 billion in loans “could have been better”.

The significant concessions made to quench the “Frugal Four" nation’s demands – Austria, Denmark, Sweden and the Netherlands – and a resurgence of Covid-19 cases in several EU member nations seems to be dragging on investor appetite.

To that end, a close eye should be paid to the development of the risk-gauging yield spread between Italian and German government bonds, with a distinct widening reflective of souring investor sentiment and probably coinciding with a sustained pullback in regional asset prices. 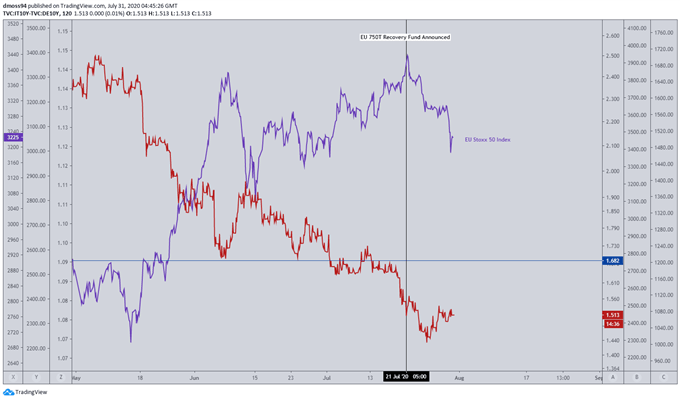 From a technical perspective, the EU Stoxx 50 looks set to extend its recent declines after carving out a potential Double Top reversal pattern at the psychologically imposing 3,400 level and slicing through the sentiment-defining 200-day moving average (3,335).

Key support at the 61.8% Fibonacci (3,243) failed to stifle selling pressure as the European benchmark index pulled back to the monthly low (3,161), with a daily close below the 50-MA (3,250) suggesting further losses may be in the offing.

Furthermore, a bearish crossover on the MACD indicator combined with the RSI diving below its neutral midpoint could stoke selling pressure. 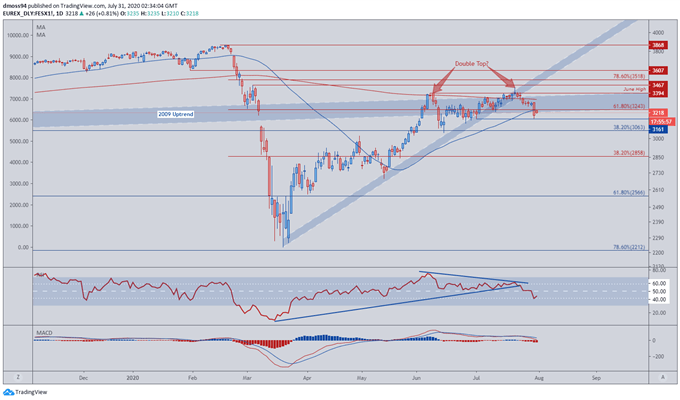