Gold exploded to a fresh record high of $1,981/oz early in Asia-Pacific trade, before a resurgent US Dollar drove the price of bullion back below yesterday’s close (1,941).

The ASX 200 slid 0.39% as cases of Covid-19 in Australia continue to remain stubbornly elevated, whilst the risk-sensitive Australia Dollar retreated from the yearly high.

Yields on US 10-year Treasuries jumped back above 0.62% as the US Dollar recovered from its lowest levels in almost two years. 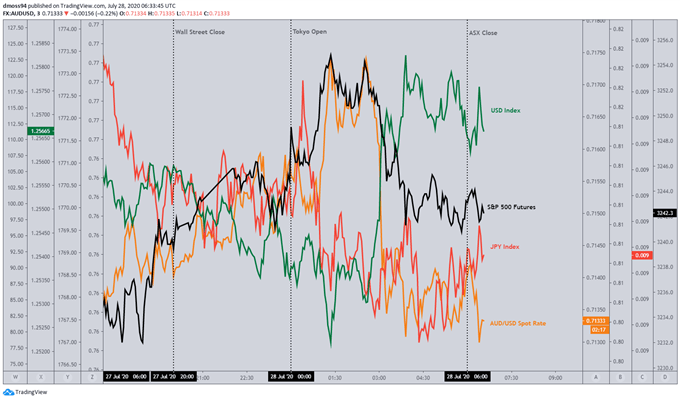 The S&P 500 may continue to be dictated by the actions of the Federal Open Market Committee (FOMC), as the US benchmark index noticeably climbed alongside a two-week expansion of the central bank’s balance sheet.

Having contracted for four consecutive weeks, the balance sheet fell below $7 trillion for the first time since early May, potentially contributing to the underperformance of the S&P 500 as it struggled to push above the June high (3,233).

However, a $44 billion dollar increase over the last two weeks has seen the sentiment-defining index climb to fresh post-crisis highs.

With Chairman Jerome Powell and Co. remaining “commited to using our full range of tools to support the economy in this challenging time”, extension of this recent trend could continue to underpin US equity markets and possibly fuel a push back to pre-crisis highs.

With that in mind, the upcoming Federal Reserve interest rate decision on July 29 could prove pivotal in determining the future direction of regional risk assets, with the central bank expected to maintain their dovish forward guidance for monetary policy. 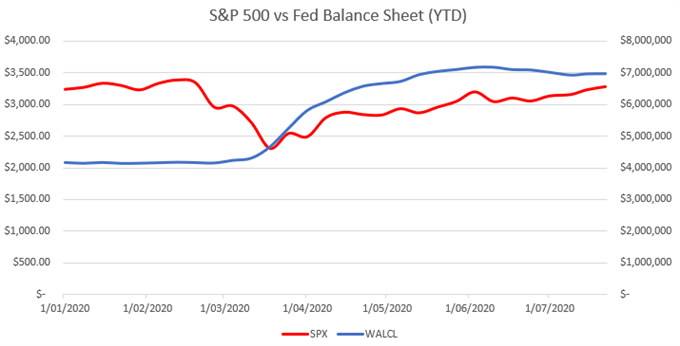 As mentioned in previous reports, the progress made on a proposed $1 trillion in additional US fiscal stimulus may dictate the outlook for regional risk assets as Senate Majority Leader Mitch McConnell implores his Democratic counterparts to “rediscover the sense of urgency that got the CARES Act across the finish line”.

However, the proposed $1 trillion HEALS Act falls short of the $3 trillion ‘Heroes Act’ rescue package passed through the House in May, prompting Senate Minority Leader Chuck Schumer to lambast his Republican counterparts for their “lack of any urgency, understanding, and empathy for people who need help”.

Furthermore, Schumer criticized the proposed $400 reduction in unemployment benefits stressing “the idea that we need to drastically reduce these benefits because workers will stay home otherwise is greatly exaggerated”.

Having said that, McConnell may face a stiffer challenge convincing his fellow Republicans to agree to the provision of further stimulus, with Senator Ted Cruz stating that “there is significant resistance to yet another trillion dollars [and] as it stands, I think it's likely that you’ll see a number of Republicans in opposition to this bill and expressing serious concerns”.

With the Senate scheduled to break for summer recess on August 7, and the nation precariously perched with “one foot in the pandemic and one foot in the recovery”, it’s evident that time is not on the side of US policymakers.

To that end, lack of progress could spook market participants ahead of the scheduled deadline, with the inability to successfully pass the proposed stimulus bill potentially souring investor sentiment and inciting an extended period of risk aversion. 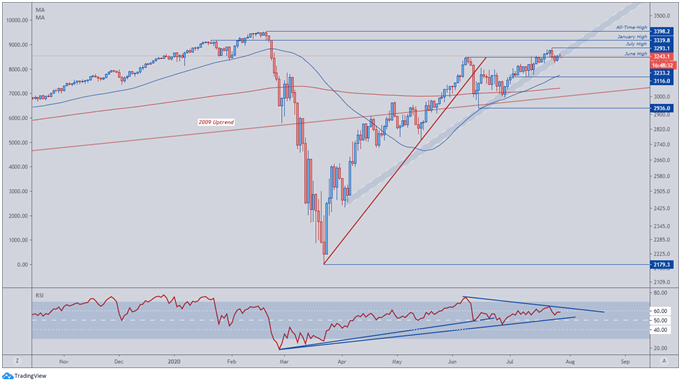 From a technical perspective, the S&P 500 stock index could be on the verge of a sustained break to the downside, as price sits precariously above the June high (3,233) and trend support extending from the April low (2,430).

A break of trend support looks in the offing as the RSI diverges from price and struggles to break above 60 into bullish territory.

A daily close below the psychologically pivotal 3,200 level could intensify selling pressure, possibly carving a path for price to test trend-defining support at the 50-day moving average (3,126).

On the other hand, a break and close above the monthly high (3,292) may invigorate buyers and potentially open up a path to retest the record high (3,398).

However, the development of the RSI should be closely watched by traders, as failure to break into overbought conditions could preceed a key reversal lower.