Gold’s historic surge to record highs proved to be the highlight of the Asia-Pacific trading session, as falling bond yields and a substantial US Dollar sell-off created the perfect environment for bullion to surge.

Regional equity markets trudged higher, with the ASX 200 climbing 0.61% despite a further 532 cases of Covid-19 recorded in Victoria, Australia’ second most populous state.

The haven-associated Japanese Yen rose against its major counterparts whilst the US Dollar Index (DXY) plunged below the psychologically pivotal 94 level.

Looking ahead, US durable goods orders for June headline a rather light economic docket as traders begin to glance towards Wednesday’s FOMC rate decision. 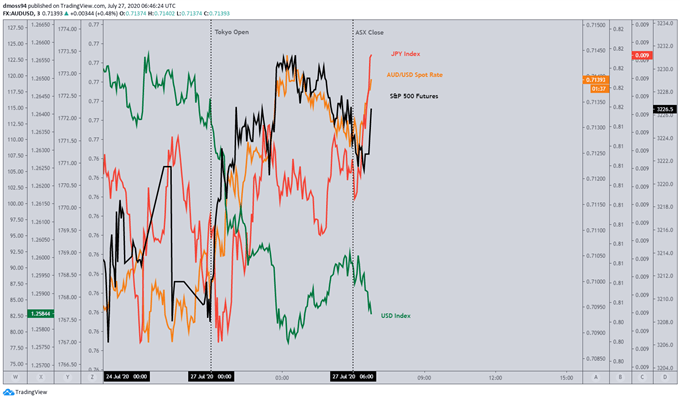 A potential ‘second wave’ of coronavirus cases in Spain has forced UK Prime Minister Boris Johnson to remove the EU nation from its list of ‘safe countries’, resulting in the reimposition of the 14-day quarantine period for British tourists upon returning to the UK.

With the tourism sector accounting for roughly 12% of Spanish GDP these measures could prove economically devastating, as 20% of foreign visitors originate from the United Kingdom.

Cognizant of the immense importance of tourism to the local economy, Spanish Foreign Minister Arancha Gonzales Lay attempted to soothe concerns stating that “Spain is a safe country [and] like other European countries, Spain has new outbreaks. It’s not unusual”.

Although the Foreign Minister stresses that “Spain is making great efforts to control these outbreaks”, UK Foreign Secretary Dominic Raab remains unapologetic for moving “to take swift, decisive action [as] the data showed a big jump right across mainland Spain”.

With that in mind, France may be the next country to fall victim to travel restrictions and quarantine measures as the 7-day moving average of daily infections jumps above 500.

Accounting for 10% of GDP, France may not be as exposed to the tourism and travel industry as its Spanish counterpart. However, inability to attract foreign tourists would be equally devastating to the local economy.

To that end, case numbers should be closely watched by regional investors as they may continue to dicate the performance of the Spanish IBEX 35 and French CAC 40 indexes. 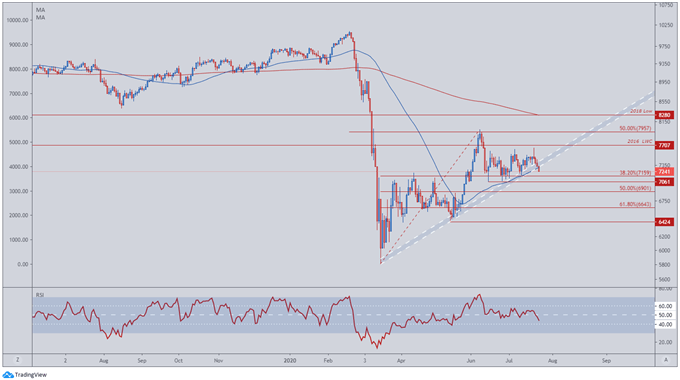 Plunging through its neutral midpoint (50), the RSI may encourage would-be sellers to drive price below support at the 38.2% Fibonacci (7,159) and back to the psychologically pivotal 7,000 level.

A daily close below the June low (7,061) is needed to validate bearish potential and could signal the resumption of the yearly downtrend, carving a path for price to test key support at the 61.8% Fibonacci (6,643). 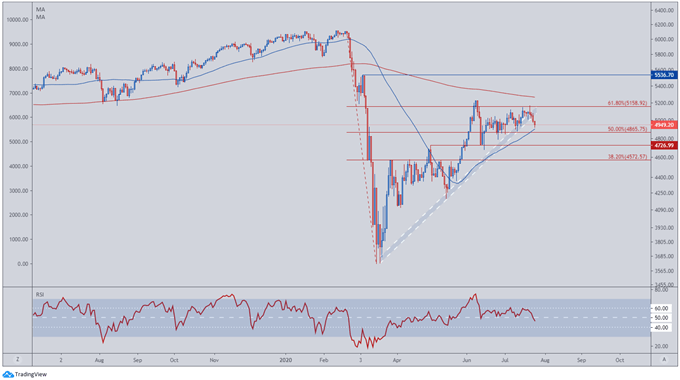 The French CAC 40 index may also extend its retreat from the monthly high (5,170) after buyers were unable to overcome key resistance at the 61.8% Fibonacci (5,159).

A bearish Shooting Star candle seemingly invigorated sellers, propelling price through the uptrend extending from the yearly low (3,626) to mobile support at the 50-day moving average (4,901).

With that in mind, a daily close below the 50% Fibonacci could signal a resumption of the yearly downtrend and potentially pave a way for path to retest key regions of interest at the April high (4,727) and 38.2% Fibonacci (4,572).