The US Dollar extended its slide as continuing jobless claims increased for the first time since March.

Gold climbed back above $1,890 as yields on US 10-year Treasuries fell back below 0.6%, fueling non-yielding bullion’s burst to nine-year highs.

Looking ahead, US Manufacturing PMI data may prove marke-moving should it fail to quench expectations.

The tit-for-tat exchange between the world’s two largest economies continues to escalate as China requested the US close its Chengdu consulate, retaliating to the enforced closure of the Chinese consulate in Houston by the Trump administration.

The Chinese Foreign Ministry stated that “the current situation in China-US relations is not what China desires to see, and the US is responsible for all of this”. Spokesperson Wang Wenbin stressed that measures taken by United States are “breaking down the bridge of friendship between the Chinese and American people”.

That being said, Mike Pompeo’s comments just hours before the announcement suggest the Secretary of State isn’t interested in cultivating a relationship with Beijing, as the “old paradigm of blind engagement with China must not continue and we must not return to it”.

Pompeo stressed that “there can be no return to past practices just because they’re comfortable, or convenient” as he called on his fellow members of the “Five Eyes” alliance – the United Kingdom, Canada, New Zealand and Australia – to “push back against the Chinese Communist Party”.

Moreover, President Donald Trump seemed to dismiss the importance of ratifying a trade deal with the US' largest trading partner, stating the importance of the phase-one trade agreement reached late last year “means much less to me”.

With Beijing stating it will “take necessary measures to safeguard its legitmate rights and interests” it seems more and more likely that a complete, irreperable breakdown in Sino-American relations could eventuate.

To that end, a period of risk aversion looks likely, potentially fueling a resurgence in the haven-associated US Dollar and hampering the performance of risk-sensitive assets.

However, the US Dollar had a somewhat muted reaction to the escalation in rhetoric, lagging its haven-linked counterparts and nudging slightly slower as foreign central banks aggressively roll back liquidity swaps with the Federal Reserve.

The accelerated decline in demand for US Dollar liquidity speaks to the calm in global debt markets, suggesting that foreign central banks now have sufficient reserves to be able to supply commercial banks with the funds they need.

With the TED spread – an indicator of potential credit risk – sitting at its lowest levels since early March, a continuation of this trend looks likely.

Therefore, the US Dollar may not respond as aggressively to a surge in risk aversion should credit markets remain relatively stable and could continue to underperform the haven-associated Japanese Yen and Swiss Franc. 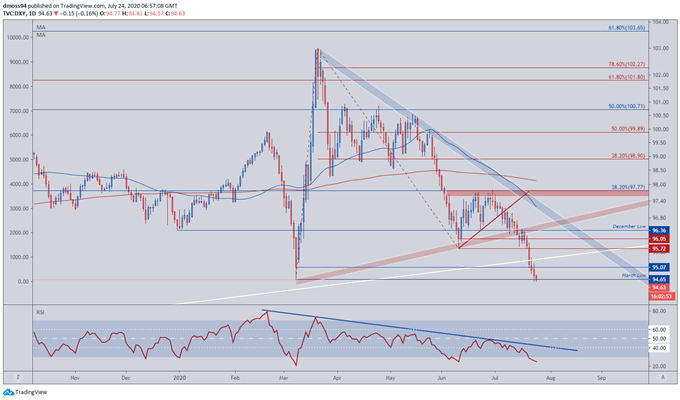 From a technical perspective, the US Dollar looks poised to claw back lost ground against its major counterparts as the RSI fails to follow price to lower lows, suggesting underlying exhaustion in the 4-month downtrend.

As price struggles to close below the March low (94.66) a correction higher seems on the cards, with the RSI climbing back above 30 possibly preceeding a push to resistance at the June low (95.72).